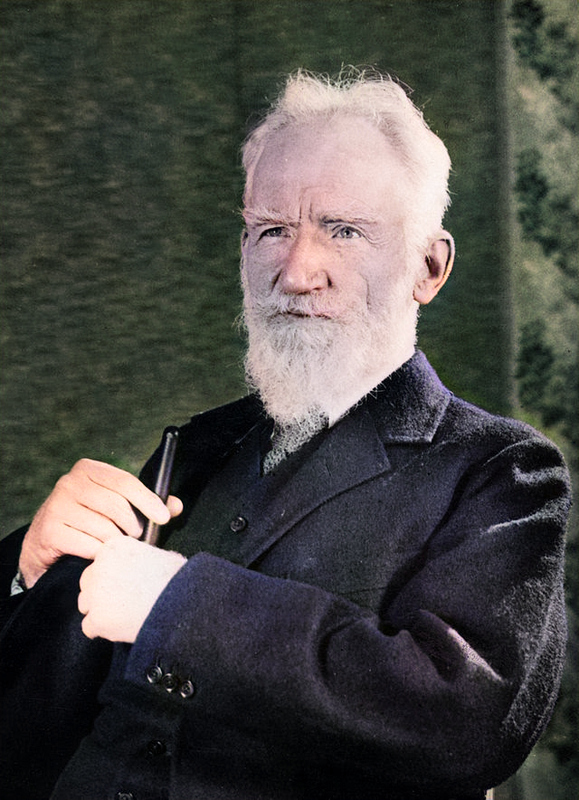 On July 26, 1856, Irish playwright and co-founder of the London School of Economics George Bernard Shaw was born. As a writer, his main talent was for drama, and he wrote more than 60 plays. He is the only person to have been awarded both a Nobel Prize in Literature (1925) and an Oscar (1938).

George Bernard Shaw was born in Synge Street, Dublin, to George Carr Shaw, an unsuccessful grain merchant and sometime civil servant, and Lucinda Elizabeth Shaw, a professional singer. His education was irregular, due to his dislike of any organized training. When Shaw was just short of his sixteenth birthday, his mother left her husband and son and moved with Vandeleur Lee to London, where the two set up a household, along with Shaw’s older sister Lucy. After working in an estate agent’s office for a while he moved to London as a young man (1876), where he established himself as a leading music and theatre critic in the eighties and nineties and became a prominent member of the Fabian Society, for which he composed many pamphlets [1]. Together with Beatrice and Sidney Webb, Shaw had founded the Fabian Society, a socialist political organization dedicated to transforming Britain into a socialist state, not by revolution but by systematic progressive legislation, bolstered by persuasion and mass education. The Fabian society would later be instrumental in founding the London School of Economics and the Labour Party.

In 1891, at the invitation of J.T. Grein, a merchant, theatre critic, and director of a progressive private new-play society, The Independent Theatre, Shaw wrote his first play, Widower’s Houses. Shaw’s first plays were published in volumes titled “Plays Unpleasant” (containing Widowers’ Houses, The Philanderer and Mrs. Warren’s Profession) and “Plays Pleasant” (which had Arms and the Man, Candida, The Man of Destiny and You Never Can Tell). The plays were filled with what would become Shaw’s signature wit, accompanied by healthy doses of social criticism, which stemmed from his Fabian Society leanings. These plays would not go on to be his best remembered, or those for which he had high regard, but they laid the groundwork for the oversized career to come [2]. In 1897 Shaw attained his first commercial success with the American premiere of The Devil’s Disciple, which enabled him to quit his job as a drama critic and to make his living solely as a playwright. In 1898, after a serious illness, Shaw resigned as theatre critic, and moved out of his mother’s house (where he was still living) to marry Charlotte Payne-Townsend, an Irish woman of independent means. Although Shaw was occasionally linked with other women, this marriage lasted until Charlotte’s death in 1943 [3].

The Norwegian playwright Henrik Ibsen had a great influence on Shaw’s thinking. For a summer meeting of the Fabian Society in 1890, he wrote The Quintessence of Ibsenism (1891), in which he considered Ibsen a pioneer, “who declares that it is right to do something hitherto regarded as infamous.”

Pygmalion, by Bernard Shaw, by far his most popular work, was first performed in 1913. “Although Shaw claimed that he had written a didactic play about phonetics, and its anti-heroic protagonist, Henry Higgins, is indeed a speech professional, what playgoers saw was a high comedy about love and class, about a cockney flower-girl from Covent Garden educated to pass as a lady, and the repercussions of the experiment… The First World War began as Pygmalion was nearing its hundredth sell-out performance, and gave Shaw an excuse to wind down the production.“, according to one of the leading experts on Shaw, Stanley Weintraub [4].

During World War I, Shaw’s anti-war pamphlets and speeches made him very unpopular as a public figure. In Heartbreak House (performed 1920) he exposed the spiritual bankruptcy of the generation responsible for the carnage. Next came Back to Methuselah (1922) and Saint Joan (1923), acclaim for which led finally to his receiving the Nobel Prize for Literature. As a representative of intellectual theatre, Shaw created a new type of drama – the discussion drama, whose heroes meet as carriers of certain ideologies. Shaw’s main interest is not in the plot, but in the struggle of opinions, the discussions about philosophical, moral, political problems his heroes are leading. Shaw often uses satirical exaggeration and grotesqueness, and his heroes are often eccentric. In 1925 Shaw was awarded the Nobel Prize “for his work, which is both idealistic and humane, often combining fresh satire with peculiar poetic beauty“.

A special feature of Shaw’s publications are the long forewords. In these he presents the themes and problems dealt with in the plays in detail, so that the forewords are sometimes longer than the plays themselves. Thereupon rumours circulated in the fan community that Shaw had declared: “I write my forewords for the intellectuals and my plays for the dummies.“

In Shaw’s drama conception, form and style no longer form independent carriers of meaning, but are subordinated to the purpose of the reality analysis and conviction of the viewer. Against conventional views, Shaw uses his own comprehensive biological and socio-political knowledge in a rhetorically unerring and at the same time witty form, on whose persuasiveness he relies. In this respect he establishes with Bertolt Brecht an enlightening, doctrinal form of modern theater that intends to steer a changing world in the “right” direction by criticizing prejudices and new constructions of reality.[5]

A mere documentary or photographic depiction of social conditions would do neither such an intention nor the increasingly complex social conditions justice. In order to uncover the problems in the relationship between man and the environment, which also includes the social and cultural structures created by man, Shaw uses above all the parable or parable.

Shaw continued to write plays and essays until his death in 1950 at the age of 94.