You are here: Home › mathematics › Jean-Victor Poncelet and Projective Geometry 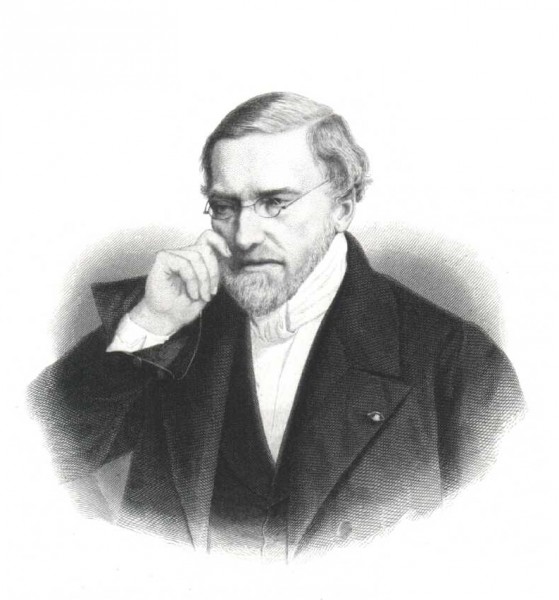 On July 1, 1788, French engineer and mathematician Jean-Victor Poncelet was born, whose study of the pole and polar lines associated with conic led to the principle of duality. As a mathematician, his most notable work was in projective geometry. He developed the concept of parallel lines meeting at a point at infinity and defined the circular points at infinity that are on every circle of the plane. These discoveries led to the principle of duality, and the principle of continuity and also aided in the development of complex numbers.

“In fact, Gentlemen, no geometry without arithmetic, no mechanics without geometry… you cannot count upon success, if your mind is not sufficiently exercised on the forms and demonstrations of geometry, on the theories and calculations of arithmetic … In a word, the theory of proportions is for industrial teaching, what algebra is for the most elevated mathematical teaching.”
— Jean-Victor Poncelet

Jean-Victor Poncelet was born in Metz, France, on July 1, 1788, the illegitimate then legitimated son of Claude Poncelet, a lawyer and wealthy landowner, and Anne-Marie Perrein. At a young age, he was sent to live with the Olier family at Saint-Avold. At age fifteen, he returned to Metz for his secondary education, at Lycée Fabert followed by the École Polytechnique in Paris, from 1808 to 1810. After graduation, he joined the Corps of Military Engineers, attended the École d’Application, and achieved the rank of lieutenant in the French Army the same year he graduated.

A Prisoner of War

Poncelet took part in Napoleon’s invasion of Russia in 1812, where he became a prisoner of war during Napoleon’s retreat from Moscow and was confined at Saratov. During his imprisonment he recalled the fundamental principles of geometry but, forgetting the details of what he had learnt from his teachers Caspard Monge, Carnot and Charles-Julien Brianchon, he went on to develop projective properties of conics.[2,5] He called the notes that he made the ‘Saratov notebook (Cahiers de Saratov),’ but it was only fifty years later that he incorporated much of what he had written in his treatise on analytic geometry Applications d’analyse et de géométrie (1862).[1] After the peace treaty was signed between France and Russia in 1814, Poncelet was released from Saratov and from 1815 he taught at Metz.

He published Traité des propriétés projectives des figures in 1822, which is a study of those properties which remain invariant under projection. This work was the first major to discuss projective geometry since Desargues‘, though Gaspard Monge had written a few minor works about it previously. It is considered the founding work of modern projective geometry. Joseph Diaz Gergonne also wrote about this branch of geometry at approximately the same time, beginning in 1810. Also his development of the pole and polar lines associated with conic sections led to the principle of duality (exchanging “dual” elements, such as points and lines, along with their corresponding statements, in a true theorem produces a true “dual statement”) and a dispute over priority with the German mathematician Julius Plücker for its discovery.[3]

From 1815 to 1825 Poncelet was a Captain of Engineers at Metz, overseeing the construction of machinery in the arsenal at Metz and teaching mechanics in the military college.[1] On 1 May 1820 he presented to the Académie des Sciences an important “Essai sur les propriétés projectives des sections coniques,” which contained the essence of the new ideas he wished to introduce into geometry. Poncelet sought to show — taking the example of the conics — that the language and concepts of geometry could be generalized by the systematic employment of elements at infinity and of imaginary elements. This goal was within reach, he contended, thanks to the introduction of the concept of “ideal chord” and the use of the method of central projections and of an extension procedure called the “principle of continuity.” But Augustin-Louis Cauchy,[6] the Academy’s referee, was little disposed to accept Poncelet’s high estimation of the value of geometric methods.[3] He claimed that the principle of continuity was “capable of leading to manifest errors”.[1]

In 1825, he became the professor of mechanics at the École d’Application in Metz, a position he held until 1835. During his tenure at this school, he improved the design of turbines and water wheels more than doubling the efficiency of the water wheel, deriving his work from the mechanics of the Provençal mill from southern France. It is hard for us to understand how important this work was for at this time much of industry was powered by waterwheels. Although the turbine of his design was not constructed until 1838, he envisioned such a design twelve years previous to that. Poncelet was promoted to Chef de Bataillon in 1831 and in 1835, he left École d’Application to become a tenured professor at Sorbonne (the University of Paris). He served on the Committee for Fortifications of Paris from 1835 to 1848.

In 1841 he became a Lieutenant-Colonel, then three years later became Colonel and, on 19 April 1848, a General of Brigade. He also became director of the École Polytechnique in April 1848, holding the post until 1850. During this time, he wrote Applications d’analyse et de géométrie, which served as an introduction to his earlier work Traité des propriétés projectives des figures. In 1849 Poncelet and Arthur Morin invented the dynamometer of rotation, which together with later refinements, became the basic investigative tool in the study of work. In 1851 the Great Exhibition of the Works of Industry of all Nations was held in Hyde Park, London. Poncelet was appointed as head of the Scientific Commission for the Exhibition. When the French organised the first Universal Exhibition in 1855. Poncelet also played an important role in this Exhibition.

After a long and painful illness, Jean-Victor Poncelet died in December 1867.