You are here: Home › cinematography › The Great Illusion by Jean Renoir 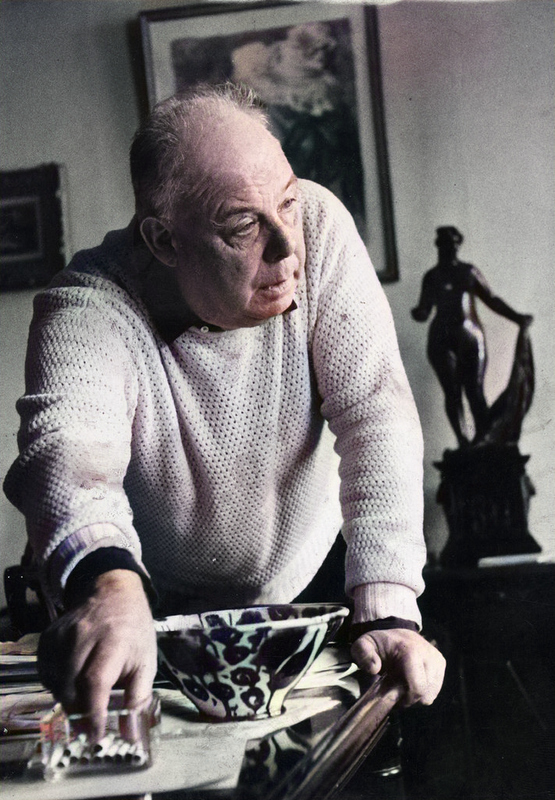 On September 15, 1894, French film director, screenwriter, actor, producer and author Jean Renoir was born. As a film director and actor, he made more than forty films from the silent era to the end of the 1960s. Jean Renoir, as a representative of the Poetic Realism of the 1930s, created important film classics such as La Grande Illusion (1937) and The Rules of the Game (1939).

“To the question, ‘Is the cinema an art?’ my answer is, ‘what does it matter?’… You can make films or you can cultivate a garden. Both have as much claim to being called an art as a poem by Verlaine or a painting by Delacroix… Art is ‘making.’ The art of poetry is the art of making poetry. The art of love is the art of making love… My father never talked to me about art. He could not bear the word.”
– Jean Renoir

Jean Renoir was born in Paris, France, the second son of Aline Victorine Charigot and the famous painter Pierre-Auguste Renoir. His brother was the actor Pierre Renoir, his nephew the cameraman Claude Renoir. Renoir was largely raised by Gabrielle Renard, his nanny and his mother’s cousin, with whom he developed a strong bond. As a child Jean Renoir lived in the South of France, where he and the other members of the family became preferred models of his father’s painting. The financial success of his father ensured that Jean could be educated in the best schools as a young man. However, his education was ended by the First World War. At the outbreak of World War I, Renoir was serving in the French cavalry. Later, after receiving a bullet in his leg, he served as a reconnaissance pilot. After the First World War he worked as a ceramic artist, but was attracted by the development of film, especially by the works of D. W. Griffith [1] and Charlie Chaplin,  and most particularly inspired by Erich von Stroheim‘s work.[2]

In 1924 he directed for the first time. Une Vie Sans Joie or Catherine. In six movies until 1928 his then wife Catherine Hessling appeared, whom he met in 1915 as his father’s last model and whom he married in 1920. By the middle of the decade, Renoir was associated with the Popular Front. Several of his films, such as The Crime of Monsieur Lange (Le Crime de Monsieur Lange, 1935), Life Belongs to Us (1936) and La Marseillaise (1938), reflect the movement’s politics.

In 1937 he made the movie, which many consider his – besides La règle du jeu (The Rules of the Game, 1939) – best work: La grande illusion. A film on the theme of brotherhood, relating a series of escape attempts by French POWs during World War I, it was enormously successful. In Germany, the film was banned as French propaganda by Joseph Goebbels, as was Benito Mussolini in Italy, after the film won a prize at the Venice Film Festival. It was followed by La Bête Humaine (The Human Beast), another box-office success based on a novel by Émile Zola [3] and starring the very popular Jean Gabin. With these films Jean Renoir belongs to the representatives of Poetic Realism and had a great influence on the Italian Neorealism of the post-war years. In 1939, able to co-finance his own films, Renoir made The Rules of the Game (La Règle du Jeu), a satire on contemporary French society with an ensemble cast. Renoir played the character Octave, who serves to connect characters from different social strata. The film was his greatest commercial failure, met with derision by Parisian audiences at its premiere. He extensively reedited the work, but without success at the time. 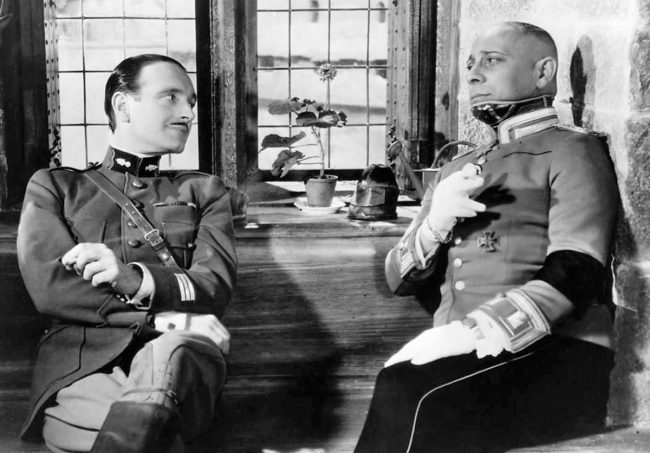 Promotional still from the 1937 film Grand Illusion, published in National Board of Review Magazine. Photograph is numbered GI-3 at lower right.

During the Second World War, the 45-year-old Renoir joined the film service of the French army. After the German invasion and occupation (1940) he fled from France to the United States, where he now worked in Hollywood. In 1943 he was director and producer of the anti-fascist propaganda film This Land Is Mine with Maureen O’Hara and Charles Laughton. Two years later he made The Southerner, the film that many consider his best work in America and for which he was nominated for an Oscar for directing. Equally crucial to Renoir’s American work are the lesser known films In the Swamps (1941) and Diary of a Chambermaid (1946). The Woman on the Beach (1947), his last American film, was a commercial failure and remained controversial in later years. At this time, Renoir became a naturalized citizen of the United States.

After returning to work in Europe, Renoir made a trilogy of color musical comedies on the subjects of theater, politics and commerce: Le Carrosse d’or (The Golden Coach, 1953) with Anna Magnani; French Cancan (1954) with Jean Gabin and María Félix; and Eléna et les hommes (Elena and Her Men, 1956) with Ingrid Bergman and Jean Marais. Perhaps the most remarkable production in Renoir’s late period was Dejeuner sur l’herbe (Picnic on the Grass, 1959). Shot entirely on his father’s last estate in the south of France, the film develops a quasi-pantheistic view of nature in the field of tension of the coming knowledge and information society. Renoir’s loving memoir of his father, Renoir, My Father (1962) describes the profound influence his father had on him and his work.

In 1964 he was elected to the American Academy of Arts and Sciences. In 1975 he received an Oscar for his life’s work, and in the same year a retrospective of his work was shown at the National Film Theatre in London. In 1977 he was awarded the Cross of the Legion of Honor by the French government. Jean Renoir died in Beverly Hills on February 12, 1979 at the age of 84.