You are here: Home › cinematography › Erich von Stroheim – Always a man of his own Invention 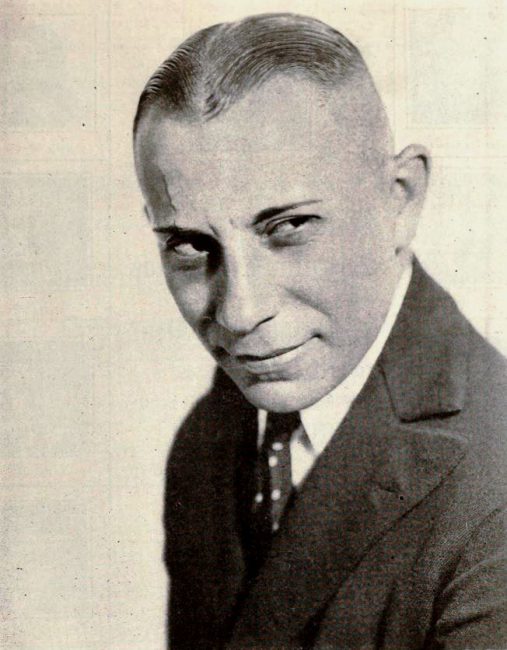 On September 22, 1885, Austrian-American director, actor and producer Erich von Stroheim was born. He is most noted as a film star and avant garde, visionary director of the silent era. His masterpiece adaptation of Frank Norris’s McTeague entitled Greed is considered one of the finest and most important films ever made. After clashes with Hollywood studio bosses over budget and workers’ rights issues, von Stroheim was banned for life as a director and subsequently became a well-respected character actor, particularly in French cinema.

“Lubitsch shows you first the king on the throne, then as he is in the bedroom. I show you the king in the bedroom so you’ll know just what he is when you see him on his throne.”
— Erich von Stroheim [3]

Childhood and Emigration to the U.S.

Erich von Stroheim’s childhood and youth in Vienna are largely in the dark, and only a few facts from this period became known. His birth certificate proves that he and his family were members of the Jewish community. Stroheim later professed to be Catholic. For some time Stroheim worked in his father’s company, a straw hat factory. His alleged military career, of which he often spoke later, is unoccupied. Erich von Stroheim left his hometown around 1909 for reasons that had never been clarified. An uncle gave him the travel money, and on 15 November 1909 he travelled from Bremerhaven with the ocean steamer Prince Friedrich Wilhelm to the United States.

After his immigration to the United States Stroheim had various activities and only came into contact with the film industry in 1914. He gained his first experience in the young Californian film industry as an extra and stuntman, among others in D. W. Griffith‘s groundbreaking film The Birth of a Nation, where he suffered a broken rib while jumping from the roof of a house. [1] This spectacular action drew Griffith’s attention to Stroheim and gave him more important tasks. The aristocracy and the military were very fascinated by Stroheim from an early age, and so he invented and cultivated an image in Hollywood as a descendant of an old noble family and claimed that his full name was Count Erich Oswald Hans Carl Maria Stroheim von Nordenwall. This picture was supplemented by his assertion that he was the son of a count and a German baroness and had himself served His Majesty as a cavalry officer and bodyguard. This and his outward appearance gave him roles as a member of the military in various shades throughout his acting career.

For the filming of the play Alt-Heidelberg by John Emerson in 1915 he was engaged as a technical consultant because of his great knowledge in military matters and he played a supporting role. This was followed by further, now increasingly important tasks as assistant director, outfitter, scenarist and actor, mostly as a German or Austrian officer or as a villain in films with Douglas Fairbanks. With the entry of the USA into the First World War against Germany and Austria-Hungary, there was an increasing demand for film villains who corresponded to the American public’s ideas of the German soldier, the “Hun“. With his grim appearance and the mentioned image – Stroheim is said to have worn his uniforms outside the film sets at times – he was ideally suited to portray such characters effectively.

Stroheim directed Blind Husbands from 1919 for the first time and also played one of the leading roles. He filmed a self-written script about a fateful triangular relationship among tourists in the Alps. The film became a huge box-office success and brought him further directing commissions for Universal Studios. With his growing obsession with detail and the associated rising costs and excessive shooting times, however, he became increasingly involved in major problems with the producing studios.

Many anecdotes about Stroheim’s eccentric directing style made the rounds and were often circulated in the press. He is said to have had a tantrum during a recording because – in a silent film – a doorbell did not work. Another time he had an elaborate mass scene repeated because a waiter in the background was not wearing white gloves. For his infamous orgy scenes he allegedly had real prostitutes engaged as extra girls. During the production of Merry-Go-Round (1923) Stroheim was dismissed by the studio boss Irving Thalberg after a few weeks of shooting because he had again not followed the studio’s guidelines. Stroheim ordered the military uniforms he needed in Vienna because, in his opinion, this was the only way to present the necessary authenticity. He let extras, who appeared as soldiers, drill for days until he was satisfied with the recordings. He had the Wiener Prater reproduced in detail on the studio premises.

Stroheim switched to the Metro company for his next project. During the shooting of Greed, the company merged with Louis B. Mayer to MGM, and so he had to deal with Greed’s studio boss Thalberg again in 1924 for the production of Greed. “Von”, as Stroheim was called at the time, wanted to film nothing less than Frank Norris‘s novel McTeague word for word for this project. The film was shot exclusively at original locations in California. The shooting in the scorching sun in the salt desert of the Californian Death Valley, where the finale of the film takes place, is notorious. The film was radically cut short by MGM and was a catastrophic financial failure. Meanwhile Greed counts to the outstanding works of the film history. 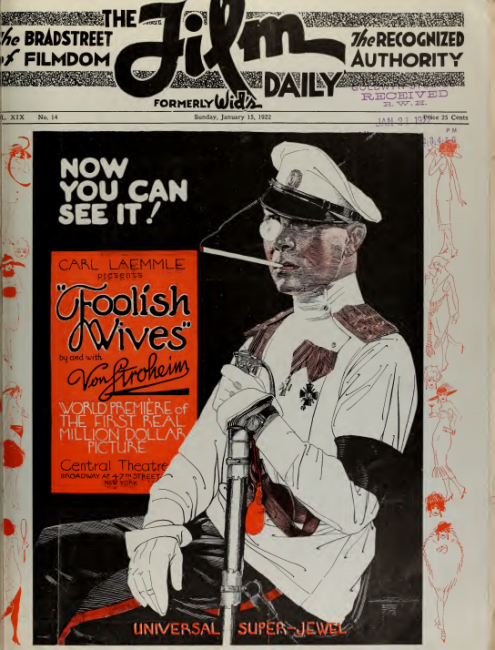 From the Merry Widow to Queen Kelly

The film adaptation of the Lehár operetta The Merry Widow followed in 1925. There was little left of the original harmless comedy in his adaptation, and the shooting was accompanied by fierce controversy between the director, producer and star Mae Murray. Despite this, The Merry Widow became Stroheim’s greatest commercial success. In 1926 Stroheim became a US citizen. His last silent movie, the melodrama Queen Kelly, was shot in 1929. Once again the shooting was overshadowed by fierce controversies between Stroheim and the producers – this time Gloria Swanson, who also played the leading role, and her then partner Joseph P. Kennedy. Stroheim was finally released after spending countless hours of footage just for the prologue.

Acting again and the Last Chance as Director

His reputation as a director was ruined, and Stroheim was forced to return to the camera as an actor for other directors. In 1929 he played the title role in his first talkies The Great Gabbo by James Cruze. As already at the beginning of his career he was often seen as a villain in supporting roles. During this time Stroheim was also often forced to work as a technical consultant and assistant dramaturge. At the beginning of 1930 Stroheim played alongside Constance Bennett at Warner Brothers in the spy drama Three Faces East. He received good reviews for the interpretation of his role. In 1932 Stroheim was to be seen alongside Greta Garbo in As you Desire Me in an important role. In 1933 Stroheim was surprisingly offered the opportunity to direct another film: Walking Down Broadway, his only talking picture. Once again, his work met with a complete lack of understanding on the part of the producers. Among other things, it was said that Stroheim’s film was at best suitable for being shown “at a congress of psychoanalysts” due to the explicit depiction of human conflicts.

Private Life and Working in France

Stroheim privately experienced severe crises during this time. His wife, the actress Valerie Germonprez, suffered severe facial burns from an accident in a hairdressing salon, and a son of Stroheim fell ill with polio. During this time Stroheim repeatedly thought of suicide. Friends like Clark Gable, who had had one of his first film appearances as an extra in Stroheim’s The Merry Widow, could however dissuade him from this plan. From 1936 von Stroheim also found hardly satisfying work as an actor in Hollywood. This led him to accept an offer from France – one of the leading roles in a film about the spy Marthe Richard. When Jean Renoir engaged him for La Grande Illusion, Stroheim settled in France for the next few years. Renoir, who was a great admirer of Stroheim, expanded his originally small role considerably during the shooting and was involved in the script work. In this film Stroheim impersonated one of his most famous roles as fortress commander of Rauffenstein. The occupation of France by the National Socialists forced von Stroheim to spend the war years again in the United States. He had been blacklisted by the National Socialists because he was of Jewish descent and had taken part in an appeal against the Nazis on French radio.

Acting Back in the U.S.

Back in the USA, Stroheim played as at the beginning of his career again in propaganda movies officers and spies or was involved in B-movies like The Mask of Diijon. Stroheim’s financial situation was tense. The embodiment of field marshal Erwin Rommel in Billy Wilders Five Graves to Cairo from 1943 brought Stroheim one of his few successes during this time. In this role, too, he attached great importance to attention to detail. For example, he is said to have demanded that a film be inserted in the camera he wore around his neck as a rumble – even though it was never used during the plot. Stroheim was of the opinion that the prop only seemed so authentic. After the end of the Second World War he returned from Stroheim to Europe and was still in great demand as an actor. In 1946 he took part in a script based on the drama Totentanz by August Strindberg and played the leading role in the film adaptation.

Billy Wilder brought Stroheim back to the United States in 1950. In Sunset Boulevard he took on the role of a silent film director who had ended his career to serve a reclusive, aging Hollywood diva (played by Gloria Swanson) as a chauffeur and butler.[2] For this role Stroheim received an Oscar nomination as best supporting actor. It was the last time he worked in Hollywood. In 1952 Stroheim played the leading role next to Hildegard Knef in a remake of Alraune. It was his only film appearance in Germany. In one of his last roles before the camera he impersonated the deaf Ludwig van Beethoven in Sacha Guitry‘s Napoleon in 1955.

In 1956, Stroheim began to suffer severe back pain that was diagnosed as cancer. He eventually became paralyzed and was carried to his drawing room to receive the Legion of Honor award from an official delegation. He died at his chateau in Maurepas near Paris on May 12, 1957 at age 71.

“If you live in France, for instance, and you have written one good book, or painted one good picture, or directed one outstanding film fifty years ago and nothing else since, you are still recognized and honored accordingly. People take their hats off to you and call you “maître”. They do not forget. In Hollywood—in Hollywood, you’re as good as your last picture. If you didn’t have one in production within the last three months, you’re forgotten, no matter what you have achieved ere this.”
— Erich von Stroheim [4]