You are here: Home › art › Animating the Absurd – Molière, Grandmaster of Comedy

(Probably) on January 14th, 1622, Jean-Baptiste Poquelin, French playwright and actor who is known by his stage name Molière was born. He is considered to be one of the greatest masters of comedy in Western literature.

Jean-Baptiste Poquelin was baptized in Paris on January 15, 1622 as son of Jean Poquelin and Marie Cressé, the daughter of a prosperous bourgeois family. His father was one of eight valets de chambre tapissiers de Roi, who tended the king’s furniture and upholstery, so the young Poquelin received every advantage a boy could wish for. He was educated at the College de Clermont in Paris, on of the finest schools in France, and had access to the king’s court. But, the boy never showed much of an interest for the business of upholstering. He was expected to take over the post his father held, but in June 1643, when Jean-Baptiste was 21, he decided to abandon his social class and pursue a career on the stage. He had fallen in love with a beautiful red-headed actress named Madeleine Béjart. Along with Madeleine, her brother Joseph and sister Genevieve, and about a dozen other young well-to-do hopefuls, he founded a dramatic troupe called The Illustrious Theater. It was about this time that he changed his name to Molière, probably to spare his father the embarrassment of having an actor in the family.

One year later, having already served two prison terms as a result of the company’s debts, Molière joined another company with the Béjarts and toured all over France for the next thirteen years. In 1650 he became the head of the company, and he managed to secure the patronage of the Prince of Conti. The short, stocky Molière was a hard worker. He frequently acted, sometimes under a clown’s mask, with the company he managed. It was during this period that Molière began to write his own plays for the company. His first important piece, L’Étourdi or The Blunderer, followed the escapades of Mascarille, a shrewd servant who sets about furthering his master’s love affair with a young woman only to have his plans thwarted when the blundering lover inadvertantly interferes. The piece immediately proved quite successful, and a number of other works followed. By the spring of 1658, Molière and his much-improved company decided to try their luck once more in Paris. When they learned that the King’s brother, the Duke of Anjou, was said to be interested in supporting a dramatic company which would bear his name, they immediately set about gaining an introduction to the Court.

On the evening of October 24, 1658, Molière and his company performed for the first time before Louis XIV in the Guard Room of the old Louvre Palace. However, they made a crucial mistake by performing a tragedy instead of one of their popular comedies. The Court was not impressed, but Molière, fortunately realizing their blunder, approached the King just in time and asked permission to perform one of his own plays, The Love-Sick Doctor, which was an immediate success: the King granted Molière and his company the use of the Hôtel du Petit Bourbon, one of the three most important theaters in Paris.

Despite his own preference for tragedy, which he had tried to further with the Illustre Théâtre, Molière became famous for his farces, which were generally in one act and performed after the tragedy. Some of these farces were only partly written, and were played in the style of Commedia dell’arte with improvisation over a canovaccio (a vague plot outline). In the course of the next thirteen years, Molière worked feverishly to make his company the most respected dramatic troupe in Paris.

Tartuffe, ou L’Imposteur was also performed at Versailles, in 1664, and created the greatest scandal of Molière’s artistic career. Its depiction of the hypocrisy of the dominant classes was taken as an outrage and violently contested. It also aroused the wrath of the Jansenists and the play was banned. However, Molière was always careful not to attack the institution of monarchy. He earned a position as one of the king’s favourites and enjoyed his protection from the attacks of the court. In 1666, Le Misanthrope was produced. It is now widely regarded as Molière’s most refined masterpiece, the one with the highest moral content, but it was little appreciated at its time. In his 14 years in Paris, Molière singlehandedly wrote 31 of the 85 plays performed on his stage.

On February 17, 1673, Molière suffered a hemorrhage while playing in The Imaginary Invalid and passed away later that night. Actually, the local priests refused to take his confession, for actors had no social standing and had been excommunicated by the church. Under French law at the time, actors were also not allowed to be buried in the sacred ground of a cemetery. It was then the King, who interceded four days later and Molière finally was buried in the Cemetery Saint Joseph. 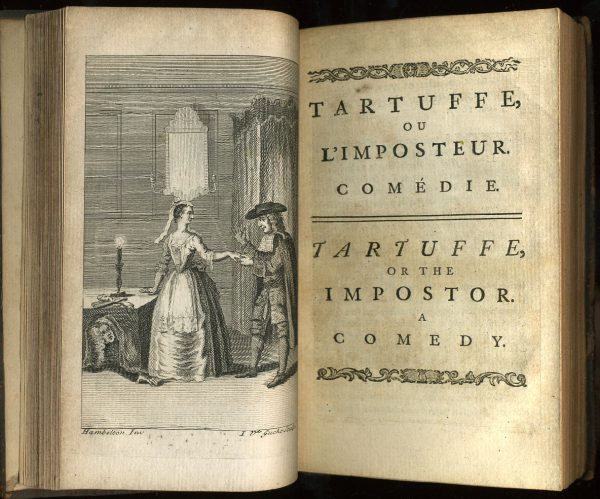 Frontispiece and titlepage of “Tartuffe or The Imposter” from a 1739 collected edition of his works in French and English, printed by John Watts. The engraving depicts the amoral Tartuffe being deceitfully seduced by Elmire, the wife of his host, Orgon who hides under a table.

An actor himself, Molière seems to have been incapable of visualizing any situation without animating and dramatizing it, often beyond the limits of probability. Though living in an age of reason, he had the good sense not to proselytize but rather to animate the absurd, as in such masterpieces as Tartuffe, L’École des femmes, Le Misanthrope, Le Bourgeois Gentilhomme, and many others. Although unquestionably a great writer, Molière insisted that his plays were made for the stage, and his early prefaces complain that he had to publish to avoid exploitation.[4]

Though conventional thinkers, religious leaders, and medical professionals in Molière’s time criticised his work, their ideas did not really diminish his widespread success with the public. Other playwrights and companies began to emulate his dramatic style in England and in France. Molière’s works continued to garner positive feedback in 18th-century England, but they were not so warmly welcomed in France at this time. However, during the French Restoration of the 19th century, Molière’s comedies became popular with both the French public and the critics. Romanticists admired his plays for the unconventional individualism they portrayed. 20th-century scholars have carried on this interest in Molière and his plays and have continued to study a wide array of issues relating to this playwright.