Illustration of Parkinson’s disease by William Richard Gowers, first published in A Manual of Diseases of the Nervous System (1886)

On April 11, 1755, English apothecary surgeon, geologist, paleontologist, and political activist James Parkinson was born. He is most famous for his 1817 work, An Essay on the Shaking Palsy, in which he was the first to describe “paralysis agitans“, a condition that would later be renamed Parkinson‘s disease.

James Parkinson was born in London. His father was an apothecary and surgeon, practicing in the city and in 1784 Parkinson was approved as a surgeon as well. Next to his medical practice, Parkinson‘s interest in politics grew as well. He was known as an advocate for the under-privileged and proponent for the French Revolution. During his lifetime, Parkinson published several political writings, especially in the post-French Revolution period. However, between 1799 and 1807, Parkinson published several medical works including first papers on peritonitis. Next to his most important research topic, Parkinson‘s disease, the scientists also helped improving the general health of the population. Parkinson published doctrines, proposing methods for a better health and welfare as well as legal protection for the mentally ill.

In 1799 and 1800 Parkinson published five more or less extensive medical works. 1799 under the title Medical Admonitions, an approximately 500-page “house book“, which addressed lay medical audiences with health advice. Also in 1799 under the title Chemical Pocket-Book a compendium of the prevailing doctrines in the field of chemistry. In 1800, an easier to understand version of the Medical Admonitions appeared under the title The Villager’s Friend and Physician, shortened by 400 pages. In the same year, the books Dangerous Sports, a children’s book warning of accident risks, and The Hospital Pupil, a critical examination of the medical training practice of the time, were published. In addition, Parkinson reported on the abuse of children and dealt with mental illness and referral practice for patients affected by it.

Before James Parkinson, the disease’s symptoms were indeed described. The oldest known records were found in Egyptian papyrus from the 12th century B.C. mentioning a king drooling with age and also the Bible contains several references to tremor. Also in the 17th century, the disease was observed and distinguished from other tremors. In 1817 however, it was James Parkinson, who published an essay describing six cases of paralysis agitans. Another essay described on the ‘Shaking Palsy‘ described the characteristic resting tremor, abnormal posture and gait, paralysis and diminished muscle strength. Also, an explanation on the diseases progress over time was given in the paper. Unfortunately, the now famous essay received only very little attention after being published, even though on this day, it is considered the seminal work on the disease. In the following years, several neurologists continued researching the ‘Shaky Palsy‘ and managed to make further additions to the knowledge on the disease. The French neurologist Jean-Martin Charcot [5] is probably the most notable and best known scientist whose studies between 1868 and 1881 were a landmark in the understanding of the disease. Among other advances he made the distinction between rigidity, weakness and bradykinesia. He also championed the renaming of the disease in honor of James Parkinson. 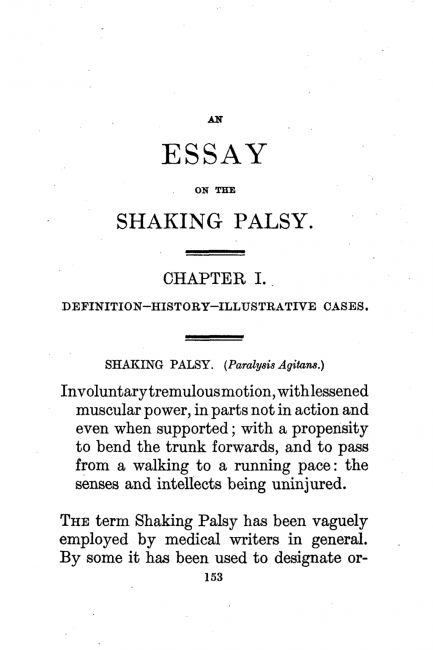 Next to observing and describing the Parkinson‘s disease, scientists also began finding possible treatments. Modern surgery for tremor, consisting of the lesioning of some of the basal ganglia structures was first tried in 1939 and was improved over the following 20 years. By the late 1980s deep brain stimulation emerged as a possible treatment and it was approved for clinical use in 1997.

An Interest in Paleontology

James Parkinson’s interest gradually turned from medicine to nature, specifically the relatively new fields of geology and palaeontology. He began collecting specimens and drawings of fossils in the latter part of the eighteenth century. He took his children and friends on excursions to collect and observe fossil plants and animals. His attempts to learn more about fossil identification and interpretation were frustrated by a lack of available literature in English, and so he took the decision to improve matters by writing his own introduction to the study of fossils. In 1804, the first volume of his Organic Remains of a Former World (1804-1811) was published. Gideon Mantell praised it as “the first attempt to give a familiar and scientific account of fossils“.[4] A second volume was published in 1808, and a third in 1811. Parkinson illustrated each volume and his daughter Emma coloured some of the plates. The plates were later re-used by Gideon Mantell. In 1822 Parkinson published the shorter “Outlines of Oryctology: an Introduction to the Study of Fossil Organic Remains, especially of those found in British Strata“. Together with the chemist Humphry Davy and others, he founded the Geological Society of London in 1807.[6] 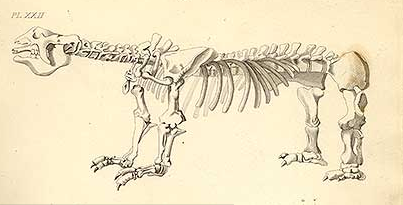 Parkinson belonged to a school of thought, catastrophism, that concerned itself with the belief that the Earth’s geology and biosphere were shaped by recent large-scale cataclysms. He cited the Noachian deluge of Genesis as an example, and he firmly believed that creation and extinction were processes guided by the hand of God.

At yovisto academic video search, you may be interested in a video lecture by Dr Melita Petrossian, who explains Parkinson’s Disease.