You are here: Home › communication › The Rarest in the World – The Blue Mauritius 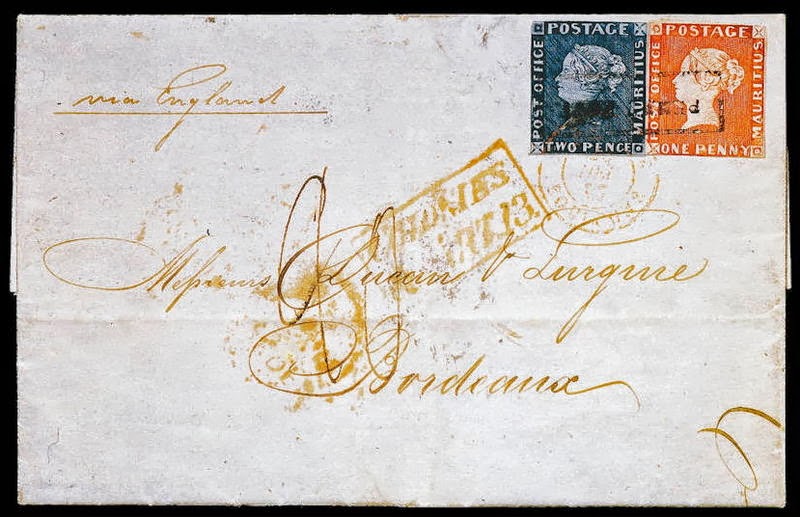 On September 21, 1847, the famous Mauritius “Post Office” stamps were issued by the British Colony Mauritius. They are among the rarest postage stamps in the world and a letter with both stamps on its cover is estimated to be worth more than 4 Million US$.

The first official postal service on Mauritius existed already in 1772.  Since 1810 the island was a British colony, before that it was French territory. Before that the island was already a Dutch colony, but it was abandoned. After the very first stamps were in circulation in Great Britain and Ireland in 1840, the administration of Mauritius wanted to follow this example. Governor Sir William Gomm had arrived from Great Britain at the end of 1842 and had experienced the reform of the British postal system in 1840. The colony’s postal system was in poor condition when he took office, and to improve it he issued an ordinance (Ordinance No. 13) on 17 December 1846, which was published in the Government Gazette on 26 December 1846.  As a result he ordered the issue of two stamps:  A one-penny stamp in red for franking local and intra-urban mail in the Mauritius capital, Port Louis, and a two-penny stamp in blue for postal traffic with the neighboring island of Rodrigues and overseas.

She process of making stamps at this place and time was pretty complex and only one stamp at a time could be produced. The stamps were engraved by Joseph Osmond Barnard. In total, 500 red (1 penny) and blue (2 pence) stamps were produced, 350 of each stamp until September 20, 1847. On September 21, Lady Gomm, the governor’s wife, sent out her invitation letters, the so-called “Ball Covers”, for the costume ball of September 30. On September 22, the sales launch for the public took place. Only one year later there was a need for more stamps. The second series of the Mauritius stamps showed with otherwise nearly unchanged motive now the words “POST PAID” instead of “POST OFFICE” on the left side.

When one found the first post office marks, one speculated due to the rarity whether the marks were perhaps only misprints, because contrary to the second series not POST PAID, but POST OFFICE is printed on. For a long time the legend held true that it was an engraver’s mistake which could not be corrected because Lady Gomm urgently needed the stamps for her invitations to the costume ball. Furthermore, Barnard is said to have had the correct text told to him again because he was said to have been forgetful and hard of hearing. According to the myth, therefore, he went to the post office once more, where its “POST OFFICE” sign led him to engrave the wrong text. There are also rumors that Barnard was supposedly half-blind and therefore engraved a wrong text. In retrospect, practically all of this turned out to be unprovable “legends.

Due to its rareness, the stamps had a pretty high value from early on and were traded very often. There is even a record list of people who have owned the most amount of the stamps at one time. From the still existing blue and red stamps it is also noted in detail, if they were used, unused or even were they were sent to. The famous Bombay letter is presumably one of the most rare and expensive letters of all times. Two blue Mauritius were stuck on it and addressed to a clergyman in Bombay. In 1906, the famous collector Alfred Lichtenstein bought the letter and since then, it was traded various times and is now owned by a Russian collector. The price of stamps varies highly and depends on how well they are preserved. A used, but well preserved blue Mauritius is estimated to have a value of about 1 million Euros.

Until this day, there is no other stamp that reached the same popularity as the Blue Mauritius even though there are some that are even more seldom and more expensive. In 2011 there was a unique exhibition in Berlin that showed 18 stamps at the same time.

At yovisto academic video search, you may enjoy a video lecture on ‘The Art of the Stamp‘ by Maynard Sundman.