You are here: Home › chemistry › Ira Remsen and the Discovery of Saccharin 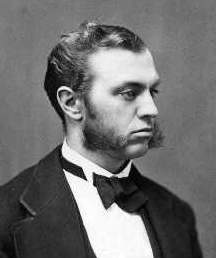 Ira Remsen was born in New York City. His parents were both descended from the early Dutch settlers New York. In his early schooling, he excelled in the classics and had almost no exposure to science. At the age of fourteen, Remsen entered the Free Academy (later the College of the City of New York), but he did not complete the four-year course there. Instead, at the urging of his father, James Vanderbilt Remsen, became an apprentice to a doctor who taught in a homeopathic medical school. Remsen was dismayed at the inadequacy of the instruction and after convincing his father, he was permitted to enroll at the College of Physicians and Surgeons at the Columbia University in 1867. [3] After graduation he was offered a desirable partnership with a well-known physician but he refused to be guided by the wishes of his father and set out for Germany to study chemistry in Munich and Göttingen, receiving a Ph.D. from University of Göttingen in 1870. Remsen began his investigations into pure chemistry at the University of Tübingen, where he was assistant (1870–72) to Rudolf Fittig. In Tübingen he also met the Scottish chemist Sir William Ramsay,[9] a fellow student who later should discover noble gases and receive a Nobel Prize in Chemistry, with whom he established a life-long friendship.

In 1872, Remsen returned to the United States and became a professor for chemistry and physics at Williams College and remained there for four years, performing his own laboratory research, although he was unable to institute a course of laboratory work for his students.[3] In 1876, he published the popular text Principles of Theoretical Chemistry, in which he emphasized Cannizzaro’s determination of molecular weights through Avogadro’s hypothesis.[5] The thereby gained reputation brought him to the attention of Daniel Coit Gilman, first president of the new Johns Hopkins University, who invited him to become one of the original faculty of Johns Hopkins University in Baltimore, the first institution in the United States devoted primarily to research. Remsen accepted and founded the department of chemistry there, overseeing his own laboratory. At Johns Hopkins, Remsen was able to introduce many of the teaching methods — especially the integration of laboratory research — with which he had become acquainted in Germany, and these practices had a profound influence on the teaching of chemistry in the United States. In 1879 Remsen founded the American Chemical Journal, which he edited for 35 years.

The Accidental Discovery of Saccharin

In 1879 Constantine Fahlberg, who had taken the Ph.D. at Leipzig, now working with Remsen in a post-doctoral capacity, made an accidental discovery that changed Remsen’s career. Eating rolls at dinner after a long day in the lab researching coal tar derivatives, Fahlberg noticed that the rolls tasted initially sweet but then bitter. Since his wife tasted nothing strange about the rolls, Fahlberg tasted his fingers and noticed that the bitter taste was probably from one of the chemicals in his lab. The next day at his lab he tasted the chemicals that he had been working with the previous day and discovered that it was the oxidation of o-toluenesulfonamide he had tasted the previous evening. He named the substance saccharin and he and his research partner Remsen published their finding in 1880. Later Remsen became angry after Fahlberg, in patenting saccharin, claimed that he alone had discovered saccharin. Remsen had no interest in the commercial success of saccharin, from which Fahlberg profited, but he was incensed at the perceived dishonesty of not crediting him as the head of the laboratory.

Although Remsen apparently felt some initial grievance about Fahlberg’s behavior, he mastered his ill will and in 1907 acted impartially as head of the board appointed by Theodore Roosevelt to determine whether sodium benzoate (used as a food preservative) and saccharin were injurious to health.[3] Throughout his academic career, Remsen was known as an excellent teacher, rigorous in his expectations but patient with the beginner. In 1901 Remsen was appointed the president of Johns Hopkins, where he proceeded to found a School of Engineering and helped establish the school as a research university. In 1912 he stepped down as president, due to ill health, and retired to Carmel, California. In 1923 he was awarded the Priestley medal. Ira Remsen passed away on March 4, 1927, at age 81.