You are here: Home › engineering › The Instruments of Jean-Charles de Borda 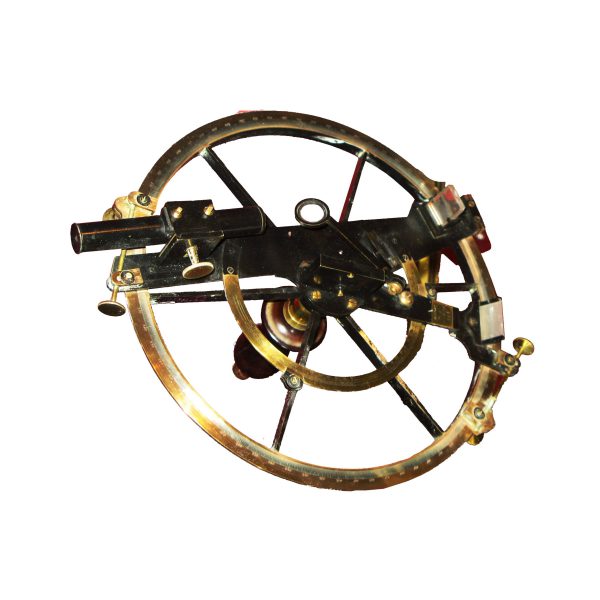 On May 4, 1733, French mathematician, physicist, political scientist, and sailor Jean-Charles de Borda was born. De Borda is noted for his studies of fluid mechanics and his development of instruments for navigation and geodesy, the study of the size and shape of the Earth. He is one of 72 scientists commemorated by plaques on the Eiffel tower.

From Latin and Greek to Mathematics and Physics 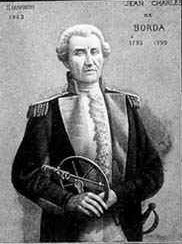 In 1758, Jean-Charles de Borda enrolled at the École du Génie at Mézière and after completion proceeded his career at the as military engineer. In 1756, Borda wrote Mémoire sur le mouvement des projectiles, a product of his work as a military engineer. For that, he was elected to the French Academy of Sciences in 1764. There he mainly dealt with nautical, astronomical and hydraulic problems. In 1771 he travelled to North America with Jean-René de Verdun de la Crenne (1741-1805) and Alexandre Guy Pingré to check the chronometers, while at the same time correcting the longitude and latitude of many coastal points, islands and cliffs. The three published the results of this voyage in the Voyage fait par ordre du roi en 1771 et 1772 en diverses parties de l’Europe et de l’Amerique (1778). At the same time, he was active in cartography and drew charts of the Azores and Canary Islands. In 1778, he took part in the military conflict against Britain during the American War of Independence. In the same matter Borda traveled in 1774 to Cape Verde, the “islands of the green foothills”, and to West Africa. He repeated this trip a few years later. In 1777 and 1778 Borda contributed to the success of the French army in North America as major general of the naval troops. In 1782 he was captured by Englishmen on the way back from Martinique and released to France on word of honour. Here he entered the naval ministry as division head. In 1784, Borda was appointed France’s Inspector of Naval Shipbuilding.

The Reflecting Circle and the Meridian Arc

In addition to merits for the French navy, nautical science and shipbuilding, Borda also made a name for himself with various scientific works and inventions. During his career, Borda developed trigonometric tables, and studied fluid flow on ships, pumps, as well as scientific instruments. For instance, Borda improved the reflecting circle initially invented by Tobias Mayer. The reflecting circle preceded the sextant and was motivated by the need to create a superior surveying instruments. Jean-Charles de Borda further improved the repeating cicle which had been invented by his assistant Etienne Lenoir, it was used to measure the meridian arc from Dunkirk to Barcelona by Delambre and Méchain.[3] Among other things, he developed a water turbine, using bent blades for the first time to reduce shock losses. He participated in the last French degree measurement, where he determined the size of the scales using a clever method and also determined the exact length of the second pendulum using a new method.

In 1770, Borda formulated a ranked preferential voting system that is referred to as the Borda count. The French Academy of Sciences used Borda’s method to elect its members for about two decades until it was quashed by Napoleon Bonaparte who insisted that his own method be used after he became president of the Académie in 1801. The Borda count is in use today in some academic institutions, competitions and several political jurisdictions. The Borda count has also served as a basis for other methods such as the Quota Borda system and Nanson’s method.

In 1778, He published his method of reducing Lunar Distances for computing the longitude, still regarded as the best of several similar mathematical procedures for navigation and position-fixing in pre-chronometer days; and used, for example, by Lewis and Clarke to measure their latitude and longitude during their exploration of the North-western United States. With Pierre Méchain and Jean-Baptiste Delambre, he was commissioned by the Academy of Sciences to determine the length of the meridian arch from Dunkirk to Barcelona, and he was particularly concerned with everything related to physics experiments. He then invented an ingenious device[ref. desired] to measure the length of the pendulum. We owe him the Trigonometric Decimal Tables and the Tables of Logarithms, Sine, Secant and Tangent, following the division of the quadrant into 100 degrees, reviewed, augmented and published by Jean-Baptiste Delambre in 1801.[3]