You are here: Home › geography › Ferdinand Freiherr von Richthofen and the Silk Road 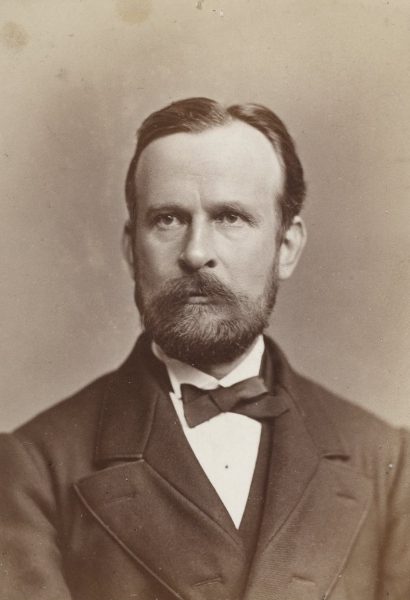 On May 5, 1833, German traveller, geographer, and scientist Ferdinand Freiherr von Richthofen was born. Von Richthofen is noted for coining the terms “Seidenstraße” and “Seidenstraßen” = “Silk Road(s)” or “Silk Route(s)” in 1877. He also standardized the practices of chorography and chorology.

Richthofen and the Alpine Geology

Ferdinand von Richthofen was born in Carlsruhe, Prussian Silesia, to Karl Richthofen and his wife Ferdinande. He attended the Catholic Gymnasium in Breslau (today Wroclaw) to complete his secondary education. Thereafter he enrolled at the University of Breslau in 1850 to study geology, followed by the University of Berlin, where he graduated in 1856. He traveled with a team of distinguished geologists to study the Alps of Tyrol and the Carpathians in Transylvania, where it was his duty to compile the combined report while carrying on the survey. His independent publication on Alpine geology ‘Geognostische Beschreibung der Umgegend von Predazzo’ (1860) received accolades from all over. He efficiently detailed about the Triassic succession in the South Tirol as also the circumstances that led to its formation. Contrary to the earlier catastrophic perception, Richthofen held slow crustal movements as the reason for alterations in the form of terrain and the tectonic disturbances.[1]

The Eulenburg Expedition and the Provinces of China

In 1860, he joined the Eulenburg Expedition, a diplomatic mission conducted by Friedrich Albrecht zu Eulenburg on behalf of Prussia and the German Customs Union, which visited Ceylon, Japan, Taiwan, Celebes, Java, the Philippines, Siam, Burma between 1860 and 1862. China was at the time inaccessible owing to the Taiping rebellion, massive civil war in China that lasted from 1850 to 1864, but Richthofen was impressed with the desirability of exploring it. From 1862 to 1868, he worked as a geologist in the United States, discovering goldfields in California. He then followed up his interest in China by several more trips there, and also to Japan, Burma, and Java. In China he located the dried-up lake bed of Lopnur. Between 1868 and 1872 he traveled through 11 of the 18 provinces of China doing geographic and geologic research. His trip was partly funded by the Shanghai Chamber of Commerce and he compiled a series of reports for them on his travels which were printed in English in 1900 under the title Baron Von Richthofen’s Letters. On one of his journeys during this period he traveled the entire Road to Shu via the Linking Cloud Road in the North and the Golden Oxen Road in the south.[2]

China, the Results of My Travels and the Studies Based Thereon

Richthofen returned to Germany in 1872 and for the next 33 years he mostly spent in lecturing and writing on China and advocating in support of geography in the universities of Germany.[1] He published his geographical, geological, economic, and ethnological findings in three volumes with an atlas, which, however, did not cover the entire field or complete the author’s plan. This work appeared at Berlin in 1877-85 under the title of China; Ergebnisse eigner Reisen und darauf gegründeter Studien (China, the Results of My Travels and the Studies Based Thereon). In this standard work, the author deals not only with geology but with every subject necessary to a general geographical treatise. Notably he paid close attention to the economic resources of the country he traversed.

Richthofen was appointed professor of geology at the University of Bonn beginning in 1875, but being fully occupied with his work in China he did not take up professorial duties until 1879. He became professor of geography at the University of Leipzig in 1883, and professor of geography at the Friedrich Wilhelm University of Berlin in 1886, which he kept until his death in 1905. His lectures attracted numerous students who subsequently became eminent in geographical work. Among his most famous students was Sven Hedin, the Swedish explorer. He served as president of the German Geographical Society for many years and founded the Berlin Hydrographical Institute.[5] 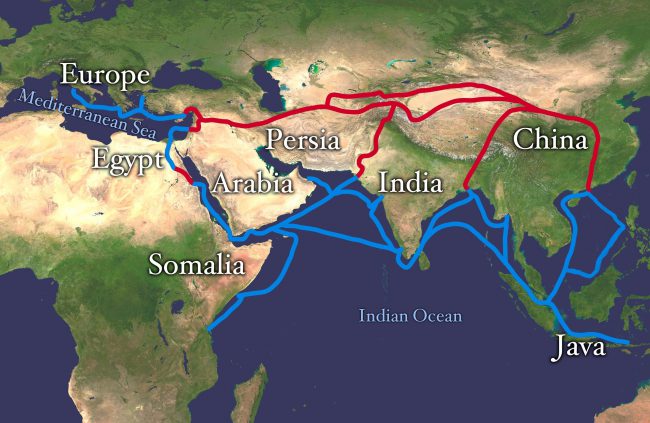 Extent of Silk Route/Silk Road. Red is land route and the blue is the sea/water route.

Ferdinand von Richthofen is noted for coining the terms “Seidenstraße” and “Seidenstraßen” = “Silk Road(s)” or “Silk Route(s)” in 1877, which denominates the ancient network of trade routes that were for centuries central to cultural interaction through regions of the Asian continent connecting the East and West and stretching from the Korean peninsula and Japan to the Mediterranean Sea. Silk Road derives its name from the lucrative trade in silk carried out along its length, beginning during the Han dynasty (207 BCE – 220 CE). Although the term was coined in the 19th century, it did not gain widespread acceptance in academia or popularity among the public until the 20th century. The first book entitled The Silk Road was by Swedish geographer Sven Hedin in 1938. Richthofen also standardized the practices of chorography and chorology, which are the art of describing or mapping a region or district, and the study of the causal relations between geographical phenomena occurring within a particular region.

Other of Richthofen’s writings include Aufgaben und Methoden der heutigen Geographie (1883; “Task and Methods of Present-day Geography”) and Treibkräfte und Richtungen der Erdkunde im neunzehnten Jahrhundert (1903; “Impulses and Directions of Geography in the 19th Century”).[3] Ferdinand von Richthofen died in 1905 in Berlin at age 72. He was an uncle of the World War I flying ace Manfred von Richthofen, best known as the “Red Baron”.