You are here: Home › biology › Ilya Mechnikov and the Discovery of Macrophages 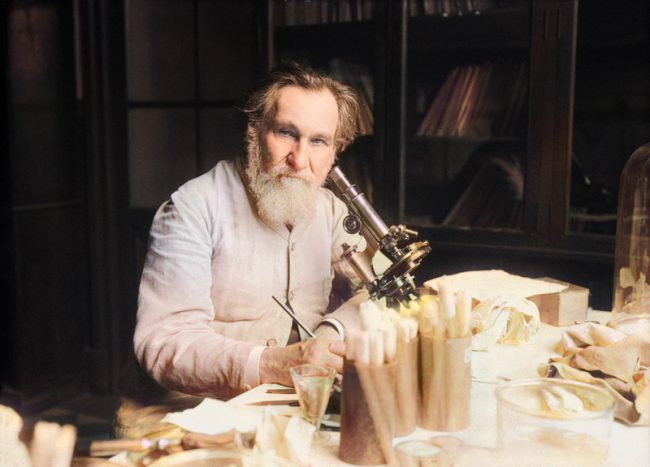 On May 16, 1845, Russian biologist, zoologist and Nobel Laureate Ilya Ilyich Mechnikov was born. He is best known for his pioneering research into the immune system. In particular, Mechnikov is credited with the discovery of macrophages in 1882. Mechnikov received the Nobel Prize in Medicine in 1908, shared with Paul Ehrlich, for his work on phagocytosis.[4]

“The duration of the life of men may be considerably increased. It would be true progress to go back to the simple dishes of our ancestors. … Progress would consist in simplifying many sides of the lives of civilised people.”
– Ilya Mechnikov, as quoted in [8]

Ilya Mechnikov was born in the village Panasovka near Kharkov (now Kharkiv in Ukraine), Russian Empire, as the youngest of five children of Ilya Ivanovich Mechnikov, an officer of the Imperial Guard and Ukraine land owner, and Emilia Lvovna, the daughter of the Jewish writer Leo Nevakhovich. Mechnikov went to school at Kharkoff and was already as little boy passionately interested in natural history, especially in botany and geology. Originally, convinced by his mother he decided to study biology instead of medicine at the University of Würzburg. But because of late start of the German academic session, he enrolled at Kharkiv University for natural sciences, completing his four-year degree in two years. In 1864 he went to Germany to study marine fauna on the small North Sea island of Heligoland and then to work with Rudolf Leuckart at the University of Giessen, where he made his first scientific discovery of intracellular digestion in flatworm, and this study influenced his later works.[1,5]

Moving to Naples the next year he worked on a doctoral thesis on the embryonic development of the cuttle-fish Sepiola and the crustacean Nelalia. A cholera epidemic in the autumn of 1865 made him move to the University of Göttingen, from where he left in 1867 to return to Russia to get his doctorate from the University of St. Petersburg. At St. Petersburg he met his first wife, Ludmilla Feodorovitch, who suffered from tuberculosis so severe that she had to be carried to church in a chair for the wedding. For five years Mechnikov did all he could to save her life, but she died in 1873. Meanwhile in 1870, Mechnikov was appointed Titular Professor of Zoology and Comparative Anatomy at the University of Odessa. Ludmilla’s death however, combined with other problems, caused Mechnikov to unsuccessfully attempt suicide, taking a large dose of opium. In 1875 he married his young student Olga Belokopytova.

The Phenomenon of Phagocytosis

In 1882 Mechnikov resigned from Odessa University due to political turmoils after the assassination of Alexander II. and went to Messina to set up his private laboratory. It was here that he discovered the phenomenon of phagocytosis. This discovery was made when Mechnikov observed, in the larvae of starfishes, mobile cells which might, he thought, serve as part of the defenses of these organisms and, to test this idea, he introduced into them small thorns from a tangerine tree which had been prepared as a Christmas tree for his children. Next morning he found the thorns surrounded by the mobile cells, and, knowing that, when inflammation occurs in animals which have a blood vascular system, leucocytes escape from their blood vessels, it occurred to him that these leucocytes might take up and digest bacteria that get into the body.[1] He discussed his hypothesis with Carl Friedrich Wilhelm Claus, Professor of Zoology at the University of Vienna, who suggested him the term “phagocyte” for cell which can surround and kill pathogens.

Pasteur and the Nobel Prize

In 1886, He returned to Odessa as director of an institute set up to carry out Louis Pasteur’s vaccine against rabies, but due to some difficulties left in 1888 and went to Paris to seek Pasteur’s advice.[6] Pasteur gave him an appointment at the Pasteur Institute, where he remained for the rest of his life. Apart from his work on phagocytosis, Mechnikov had, during his earlier period of scientific activity, published many papers on the embryology of invertebrates. At the Pasteur Institute in Paris Mechnikov was engaged in work associated with the establishment of his theory of cellular immunity. In 1908 Mechnikov was awarded, together with Paul Ehrlich, the Nobel Prize for Physiology or Medicine.

Mechnikov also developed a theory that aging is caused by toxic bacteria in the gut and that lactic acid could prolong life. Based on this theory, he drank sour milk every day. He wrote The Prolongation of Life: Optimistic Studies, in which he espoused the potential life-lengthening properties of lactic acid bacteria (Lactobacillus delbrueckii subsp. bulgaricus). He attributed the longevity of Bulgarian peasants to their yogurt consumption

Mechnikov died in 1916 in Paris from heart failure at age 71.