You are here: Home › communication › Adolph von Knigge and the Art of Human Relations

On May 6, 1796, Freiherr Adolph Franz Friedrich Ludwig Knigge passed away. In Germany, Knigge is best remembered for his book ‘Über den Umgang mit Menschen‘ (On Human Relations), a treatise on the fundamental principles of human relations that has the reputation of being the authoritative guide to behaviour, politeness, and etiquette.

“Without inspiration, which fills the soul with a healthy warmth, nothing great can ever be brought to pass.”
— Adolph von Knigge, Über den Umgang mit Menschen (1788)

A Nobel but Poor Family

Knigge’s father was Carl Philipp Freiherr Knigge (1723-1766) and his mother Louise Wilhelmine (1730-1763), the daughter of the chamber junkie Friedrich Wilhelm Freiherr Knigge from Weimar. Knigge grew up in Bredenbeck, where he was raised according to his rank. His mother died when he was eleven years old, his father when he was 14. He inherited debts amounting to 130,000 Reichstalern. The creditors took the estate under forced administration and granted him an annual pension of 500 Reichstalers. At the age of 14, the parentless child was sent by his guardian to Hanover for education through private instruction. He studied law and cameralistics in Göttingen from 1769 to 1772.

Stealing A Shoe for Getting Married

In 1771, Knigge was appointed Court Junker and Assessor of the War and Domain Chamber of Kassel by Landgrave Friedrich II of Hessen-Kassel. He held this office only briefly, because he “made himself impossible by official and convivial inconveniences“. In 1773 he married the court lady Henriette von Baumbach, allegedly because Countess Philippine von Brandenburg-Schwedt had compelled him to do so: Shortly before this he had exposed the court lady by stealing her shoe at court, which was meant as a joke.

“Respect yourself, if you want others to respect you.”
– Adolph von Knigge, Über den Umgang mit Menschen (1788)

Between 1777 and late autumn 1780 Knigge lived at the court of the hereditary prince and later Elector Wilhelm in Hanau, where he published a number of writings and – until he had to flee in disfavour due to various incidents – apparently led a quite pleasant court life financed by the hereditary prince. In his satirical novel Geschichte Peter Clausens (The Story of Peter Clausen), which was completed in 1785, he mocked what he considered to be the “most miserable court satchels” and the whole “court business”. From 1780 Knigge therefore lived in Frankfurt am Main to devote himself to his literary projects and work in various lodges and secret societies. In 1783 he moved to Heidelberg, later he went back to Hanover to take care of his goods. 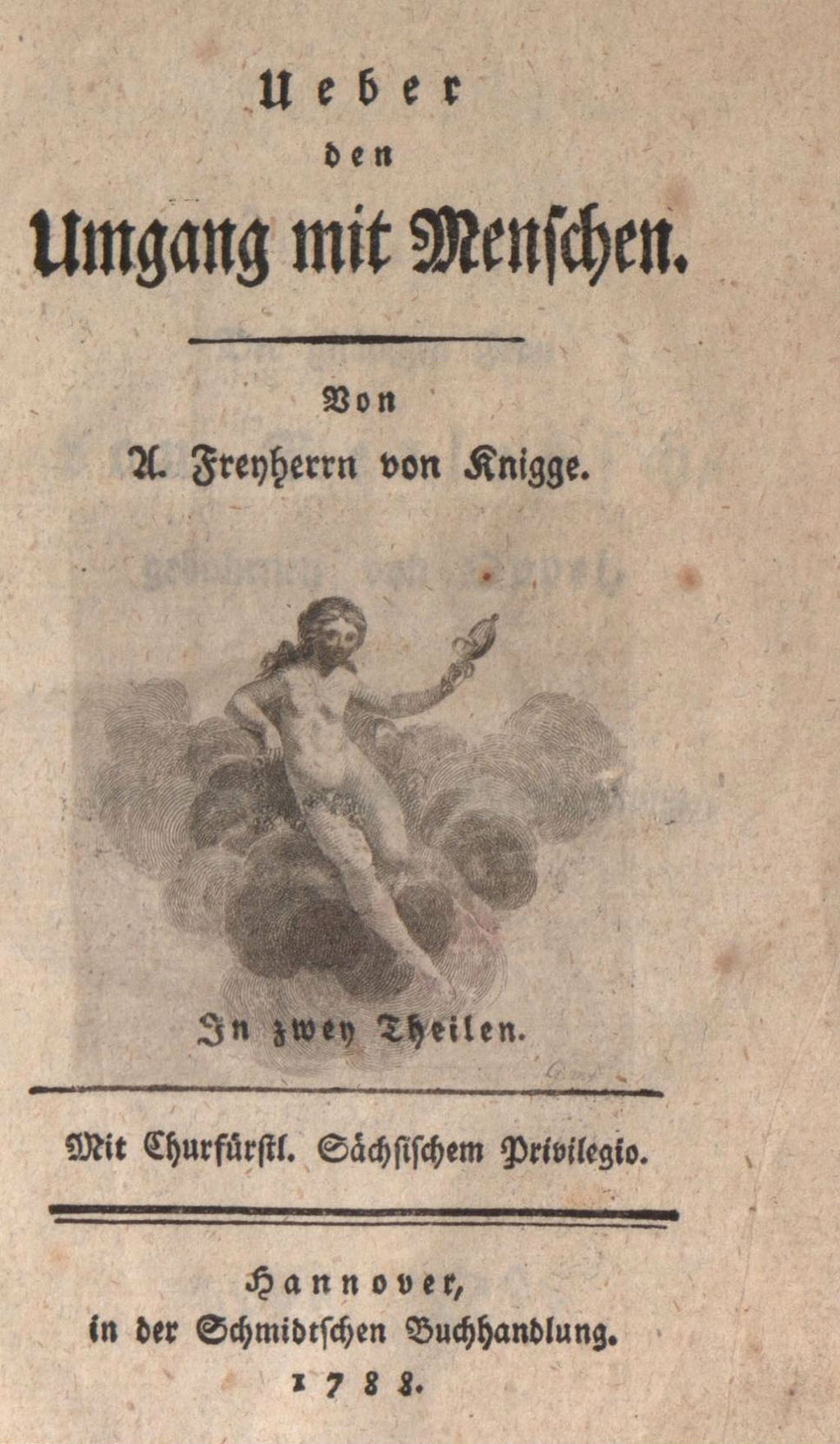 The Art of Conversing with Men

In 1788, the very first edition of his book ‘Über den Umgang mit Menschen‘ (On Human Relations), which is today simply known as ‘Knigge‘ was published. Further editions appeared in the following years and Knigge faced an instant success with his work and after his death, numerous editions followed with the introduction of behavior rules. The modern ‘Knigge‘ we know today was born. Now, we associate ‘Knigge‘ with good manners and behavior even though this is not, what the author intended. According to Knigge, the book gives an introduction to the social interactions influenced by the ideals of the enlightenment. Furthermore, the author discusses sociological and social-psychological topics. Knigge also gives insights into his historical, literary, and journalistic knowledge. One can very well appreciate his thoughtful and worldly explanations as applied sociology, which becomes clear in the sections On dealing with children, On dealing with doctors, On dealing with irascibles, On dealing with villains and last but not least On dealing with oneself.

The work consists of three major parts. In the first section, Knigge gives an introduction to human relations and he explains how a person interacts with others concerning their different natures and tempers. In the next part he describes these aspects concerning a person’s family followed by a description of a person’s interaction with animals. The book was translated into the English language and published in 1805 titled ‘Practical Philosophy of Social Life: Or the Art of Conversing with Men‘. Mistakenly this book was later misunderstood as a book of behaviour, often only after hearsay. This misunderstanding was already reinforced by the publisher who, after the death of Knigge, added rules of etiquette to the book. It is also known that a new edition was published about every ten years – mainly with dress codes. Today, one expects from a “Knigge” mostly hints on how to group red wine glasses into white wine glasses at the laid table; however, such Knigge itself completely passed over.

Knigge joined the order of Strict Observance in 1773, but due to his limited financial means he did not succeed in advancing to the narrower leadership circle of the elite order. In Kassel, Knigge was accepted into the Masonic Lodge Zum gekrönten Löwen. In Hanau he was a member of the Lodge Wilhelmine Caroline. As Eques a cygno (Latin: Swan Knight) he corresponded with their leaders and with those of the Order of the Gold and Rosicrucians. In the service of Freemasonry he travelled a lot. On the convents of the Strict Observance in Braunschweig, Wolfenbüttel and Wilhelmsbad he advocated reforms. Disillusioned and severely disappointed by his contacts in the Freemasonry environment, Knigge joined the radical enlightened Illuminati Order through Marquis Constanzo in 1780 under the pseudonym “Philo”.[6] Knigge was commissioned to establish the order in northern Germany, whereby the restless and skilful organizer succeeded in recruiting about 500 members, mainly nobles and intellectuals. Johann Christoph Bode, recruited by Knigge, even won over Johann Wolfgang von Goethe.[7] In 1781 he anonymously published the polemic about Jesuits, Freymaurer and German Rosicrucians, in which he spread the conspiracy theory that the strict Oberservanz and the Rosicrucians were secret instruments of the Jesuit order dissolved in 1773, with which it pursued its counter-enlightenment goals. After fierce power struggles with Bode and Adam Weishaupt, Knigge was again excluded in 1784. Looking back he said that the “renewal of the spiritual life of the nation” hoped for by him through the Order had not been feasible.

From 1790 until his death he lived in Bremen, where, out of financial difficulties, he took over the office of chief governor of the Great British Hanoverian Government. He was also involved in the cultural life of the city and supported a lover’s theatre until 1795 when he was tied to his bed by nervous fever and gallstones. Knigge died in Bremen in 1796, at age 43.

At yovisto academic video search, you may be interested in a video lecture on the Age of Enlightenment. Professor Dustin Champion discusses, why the ideas of the period still matter today.