You are here: Home › cinematography › Walt Disney’s ‘Steamboat Willie’ and the Rise of Mickey Mouse 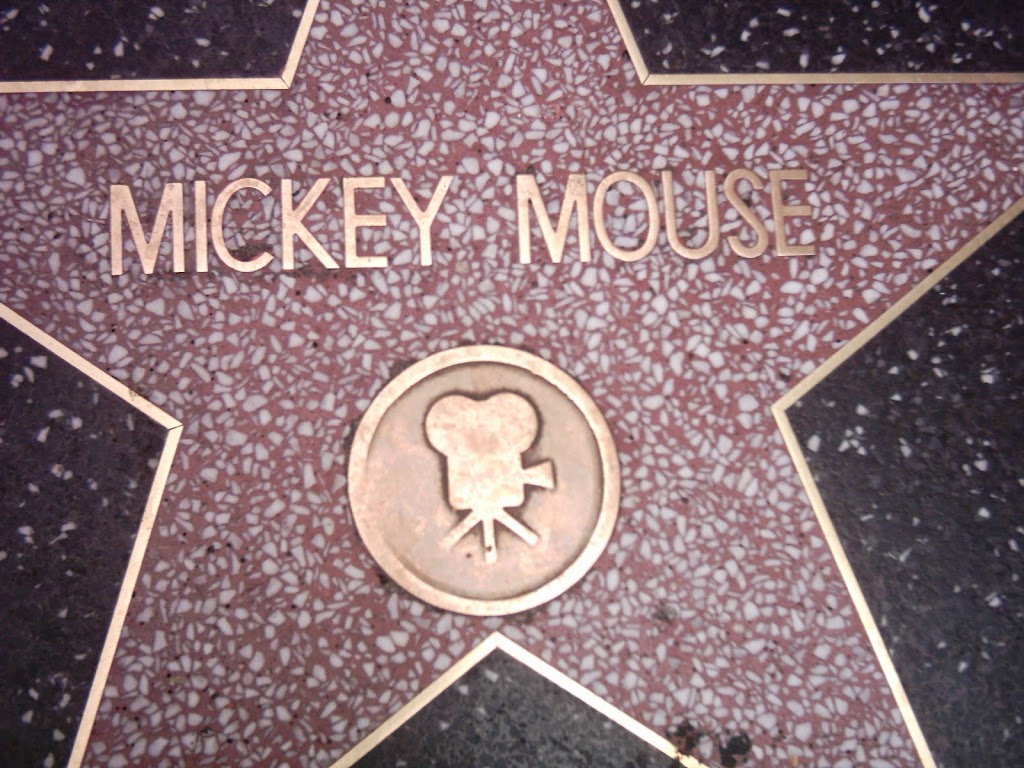 Along with Donald Duck, the Rugrats and the Simpsons, Mickey Mouse is one of the few cartoon or comic figures who made it to a star on the famous Walk of Fame in Hollywood (at the address 6925 Hollywood Blvd.)
Image by Flickr user freshwater2006

On November 18, 1928, Walt Disney’s animated movie ‘Steamboat Willie‘ was released that presented his most famous character ‘Mickey Mouse‘ for the very first time in New York City. The film is also notable for being the first cartoon with synchronized sound.

“I only hope that we never lose sight of one thing — that it all started with a mouse.”
– Walt Disney, What Is Disneyland television program (27 October 1954)

The movie was produced in black-and-white and debuts Mickey Mouse as well as his girlfriend Minnie. Even though it was the third of Mickey’s films to be produced, it was the first to be distributed. The movie starts out with Mickey steering a river steamboat until the boat’s real captain Pete appears, who orders Mickey off the bridge. Mickey and Pete then proceed to fight back and forth on the ship while they accidentally trip and fall. Eventually, Minnie appears on board and the two mice proceed to make music together using the animals aboard. Meanwhile, Pete gets angry again, ordering Mickey to peel the potatoes. A parrot appears, who makes fun of the mouse and Mickey throws a potato at him, which knocks the parrot into the river.

Oswald the Lucky Rabbit used to be the star of Disney’s and he was one of the first cartoon characters that had personality. However, Disney lost the rights to the character and Mickey Mouse was intended to become the new star. The first films starring Mickey Mouse were silent films and did not really impress the audiences. No distributor was found and Disney came to realize that adding sound to a cartoon would probably increase its appeal. However, Steamboat Willie was not the first cartoon synchronized sound. Dave and Max Fleischer’s Inkwell Studios produced 19 sound cartoons in the mid 1920s using the Phonofilm sound-on-film process. Unfortunately, the sound could not be synchronized completely. Steamboat Willie was produced using a click track to keep his musicians on the beat. Back then, click track meant that optical marks were made on the film to indicate precise timings for musical accompaniment.

Initially, the producers had doubts about the sound in a cartoon and Disney arranged a test screening with a small audience consisting of Disney employees and their wives. The live sound accompanied the partly finished film Steamboat Willie. Behind the movie screen, a bed sheet was installed along with a microphone and speakers. The sound, consisting of a mouth organ, percussion and several ‘special effects‘ like bells and whistles, was produced from behind the sheet. The audience loved it and a company was hired to professionally produce the sound system as well as the Green Brothers Novelty Band for the final soundtrack. Steamboat Willie premiered at Universal’s Colony Theater in New York City on November 18, 1928 and was an instant success which caused Walt Disney and Mickey Mouse international fame.

Although Mickey Mouse, whom his creator initially wanted to call Mortimer Mouse, already appeared in the silent movie Plane Crazy, he only achieved his great fame through the film Steamboat Willie. Already in Steamboat Willie, Mickey’s later opponent Black Pete also appeared. The popularity of this film was not least due to the fact that it was the first better known animated film with sound. The voice of the mouse protecting her friend Minnie there was that of Walt Disney himself, and his desire to let everyone hear it almost ruined him. During the sound recordings the tubes of the amplifier had given up their ghost, and the small studio of Disney, his brother Roy and her partner Ub Iwerks was on the verge of bankruptcy. Walt sold his car to be able to produce voice and orchestral accompaniment. At his first appearances Micky was not much more than an Oswald (the lucky rabbit) with shorter ears and longer tail. But soon the appearance of Micky changed. First he got rimmed eyes instead of pointy eyes and so he was able to have a bigger facial expression. From the movie The Opry House (1929) Micky wore gloves. But one characteristic was not changed: Like almost all cartoon characters, Micky only has four fingers. This should reduce the animation effort. For this reason, Micky wears only simple trousers with two buttons for a very long time, and is not given full clothing until very late (from 1945 Micky Mouse wore long pants).

After Micky’s great successes in the later 1920s and 1930s, original secondary characters, such as Donald Duck,[4] invented in 1934, finally achieved greater popularity. From the 1940s onwards, therefore, only a few films with Mickey Mouse in the leading role were made. Disney had already had its first experience of building a figure as a brand when marketing the lucky rabbit; at Micky, merchandising became a huge business. In 1930, the first licensed product appeared: for a fee of 300 dollars, a company was allowed to print school folders with the mouse. Three years later, the power of the brand had grown so much that it could save an entire company. The Ingersoll-Waterbury watch factory resisted the imminent bankruptcy thanks to the license to produce Mickey Mouse watches. Within a few years, Disney earned millions with such businesses. According to the original legal regulations of the USA, Mickey Mouse would no longer be a copyrighted work today. However, the extension of protection was made possible by an amendment to the law, the so-called Sonny Bono Copyright Term Extension Act.

Patrick Chappatte: The power of cartoons [8]