You are here: Home › psychology › Hermann Ebbinghaus and the Experimental Study of Memory 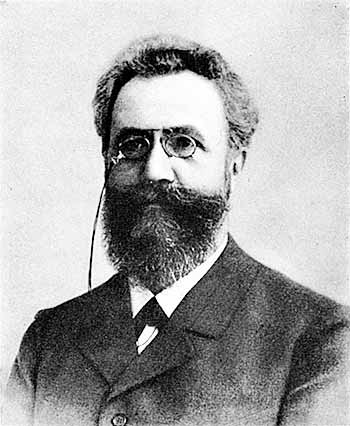 On January 24, 1850, German psychologist Hermann Ebbinghaus was born. Ebbinghaus pioneered the experimental study of memory, and is known for his discovery of the forgetting curve and the spacing effect.

“When we read how one mediæval saint stood erect in his cell for a week without sleep or food, merely chewing a plantain-leaf out of humility, so as not to be too perfect; how another remained all night up to his neck in a pond that was freezing over; and how others still performed for the glory of God feats no less tasking to their energies, we are inclined to think, that, with the gods of yore, the men, too, have departed, and that the earth is handed over to a race whose will has become as feeble as its faith.”
– Hermann Ebbinghaus (1885) [8]

Hermann Ebbinghaus was born in Barmen, in the Rhine Province of the Kingdom of Prussia and attended the University of Bonn where he intended to study history and philology. In 1870, his studies were interrupted when he served with the Prussian Army in the Franco-Prussian War. Ebbinghaus evolved a great interest in philosophy and finished his dissertation on Eduard von Hartmann‘s Philosophie des Unbewussten (Philosophy of the Unconscious). After earning his doctorate degree in 1873, Ebbinghaus spent much time in Halle and Berlin and also traveled through England and France. It is assumed that Ebbinghaus took teachers positions while on travel and apparently he discovered Gustav Fechner‘s book Elemente der Psychophysik (Elements of Psychophysics) while in London.[4] The book highly inspired the young scientist to start his own research on memory studies.

Ebbinghaus’ famous work, Memory: A Contribution to Experimental Psychology was already published in 1885 and was so successful that he was appointed professor at the University of Berlin. Ebbinghaus and Arthur König founded the Psychological journal Zeitschrift für Physiologie und Psychologie der Sinnesorgane in 1890. Ebbinghaus joined the University of Breslau, Poland and studied how children’s mental ability declined during the school day. He also founded a psychological testing laboratory there. Die Grundzüge der Psychologie where published in 1902, which was an instant success. Two years later, Ebbinghaus moved to Halle. His last and quite successful work Abriss der Psychologie (Outline of Psychology) was published in 1908.

Prior Knowledge, Understanding, and Learning

Contrary to most scientists studying higher mental processes, Ebbinghaus believed that research could be conducted through experiments. He developed a system recognizing the fact that learning is always affected by prior knowledge and understanding. Ebbinghaus figured that he would need something that would be memorized easily but without prior cognitive associations. The scientist created the so called “nonsense syllables“. This can be understood as a consonant-vowel-consonant combination, where the consonant does not repeat and the syllable does not have prior meaning, like DAX, BOK, and YAT. After creating the collection of syllables, Ebbinghaus pulled out a number of random syllables from a box and then write them down in a notebook. Then, to the regular sound of a metronome, and with the same voice inflection, he would read out the syllables, and attempt to recall them at the end of the procedure. One investigation alone required 15,000 recitations.

However, there were also some limitations in Ebbinghaus’ work on memory. For instance, he was the only subject in the study and therefore it was not generalizability to the population. Also, a large bias is to be expected when a subject is a participant in the experiment as well as the researcher. Still, Ebbinghaus managed to contribute significantly to the research on memory. His most famous finding is probably the forgetting curve, which describes the exponential loss of information that one has learned. His results roughly state that just 20 minutes after learning, we can only recall 60% of what we have learned. After one hour, only 45% of what has been learned is still in our memory, and after one day only 34%. Six days after learning, the memory has already shrunk to 23%; only 15% of what has been learned is permanently stored. 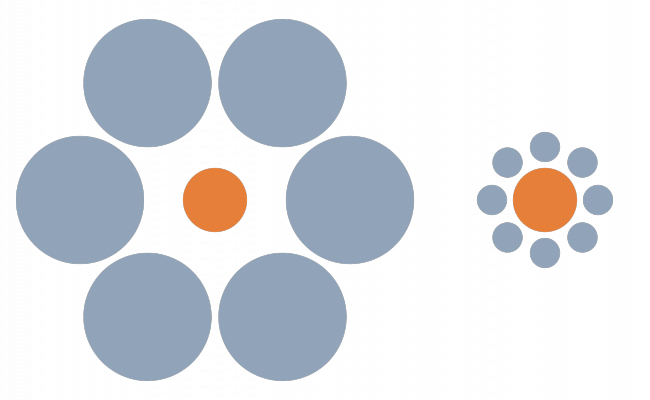 The Ebbinghaus Illusion – The two orange circles in the middle are the same size.

In the most famous version of this illusion, two circles of identical size are placed close to each other and one is surrounded by large circles while the other is surrounded by smaller circles; the first central circle appears smaller than the second central circle. This illusion has been used extensively in research in cognitive psychology to learn more about the different perceptual pathways in our brain. In the English-speaking world, the circles were published by Edward Bradford Titchener in a book on experimental psychology in 1901, hence their alternative name Titchener circles.

Shortly after the publication of Abriss der Psychologie, on February 26, 1909, Ebbinghaus died from pneumonia at the age of 59.