You are here: Home › biology › Theodosius Dobzhansky and the Unifying modern Evolutionary Synthesis 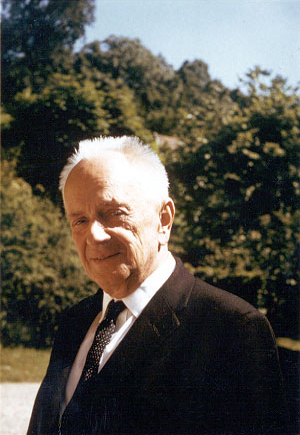 “[Evolution] is a general postulate to which all theories, all hypotheses, all systems must hence forward bow and which they must satisfy in order to be thinkable and true. Evolution is a light which illuminates all facts, a trajectory which all lines of thought must follow—this is what evolution is.”
Theodosius Dobzhansky, quoting Pierre Teilhard de Chardin, in Nothing in Biology makes Sense in the Light of Evolution (1973)

Theodosius Dobzhansky was born in Nemyriv, Russian Empire, currently Ukraine, as an only child to his father, Grigory Dobzhansky, a mathematics teacher, and his mother was Sophia Voinarsky. In 1910 the family moved to Kiev, where Dobzhansky collected butterflies and came to the decision to become a biologist. In 1915, he met Victor Luchnik who convinced him to specialize in beetles instead. Dobzhansky chose to work with ladybird beetles, which would be the subject of his first scientific publication in 1918.[2] Dobzhansky attended the Kiev State University between 1917 and 1921, where he then studied until 1924. Before his graduation, he was hired as an instructor in zoology at the Polytechnic Institute in Kiev.[2] He then moved to Saint Petersburg, Russia, to study under Yuri Filipchenko, where a Drosophila melanogaster (fruit flies) lab had been established, where Dobzhansky was encouraged to investigate the pleiotropic effects of genes.[2]

Immigration to the U.S.

Dobzhansky immigrated to the United States in 1927 on a scholarship from the International Education Board of the Rockefeller Foundation. Dobzhansky had already published 35 scientific works on entomology and genetics before he started to work with Thomas Hunt Morgan at Columbia University in New York, who had pioneered the use of fruit flies in genetics experiments. He followed Morgan to the California Institute of Technology from 1930 to 1940. On the basis of his experiments, he articulated the idea that reproductive isolation can be caused by differences in presence of microbial symbionts between populations.

In 1937, he published one of the major works of the modern evolutionary synthesis, the synthesis of evolutionary biology with genetics, entitled Genetics and the Origin of Species, which amongst other things, defined evolution as “a change in the frequency of an allele within a gene pool“. Dobzhansky’s work was instrumental in spreading the idea that it is through mutations in genes that natural selection takes place. Also in 1937, he became a naturalized citizen of the United States.

Genetics and the Origin of Species

By the early 1930s the work of R. A. Fisher, S. Wright, and J. B. S. Haldane had provided a theoretical framework accounting for the process of evolution, particularly natural selection, in genetic terms.[5] This framework can be considered the groundwork for a theory combining Darwinian evolution and Mendelian genetics [3,6]. However, it had a limited impact on the biology of the time for various reasons: it was formulated for the most part in mathematical language, it was almost exclusively theoretical with little empirical corroboration, and it was also limited in scope. Dobzhansky completed the integration of Darwinism and Mendelism in two ways: he gathered the empirical evidence that corroborated the mathematical framework, and he extended the integration of genetics with Darwinism much beyond the range of issues treated by the mathematicians. Moreover, Dobzhansky’s Genetics and the Origin of Species was written in prose understandable to all biologists.[2]

Until the 1930s, the commonly held view was that natural selection produced something close to the best of all possible worlds and that changes would be rare and slow and not apparent over one life span, in agreement with the observed constancy of species over historical time.[1] Dobzhansky was about to change this view. In observing wild populations of the vinegar fly Drosophila pseudoobscura, he found extensive genetic variability. Furthermore, about 1940 evidence accumulated that in a given local population some genes would regularly change in frequency with the seasons of the year. Compared to a generation time of about one month, these changes were rapid. A genetic system of the kind proposed by Dobzhansky can change rapidly, in response to natural selection, if environmental conditions should change. Other experiments showed that, in fact, flies of mixed genetic makeup (heterozygotes) were superior in survival and fertility to pure types.[1]

In 1941, Dobzhansky was awarded the Daniel Giraud Elliot Medal from the National Academy of Sciences. He returned to Columbia University from 1940 to 1962. He then moved to the Rockefeller Institute (shortly to become Rockefeller University) until his retirement in 1971. Dobzhansky was elected a Foreign Member of the Royal Society (ForMemRS) in 1965. In 1970, he published Genetics of the evolutionary process.

Theodosius Dobzhansky died from heart failure on December 18, 1975, aged 75, after having been diagnosed woth lymphocytic leukemia.