You are here: Home › geology › Hans Cloos and the Granite Tectonics 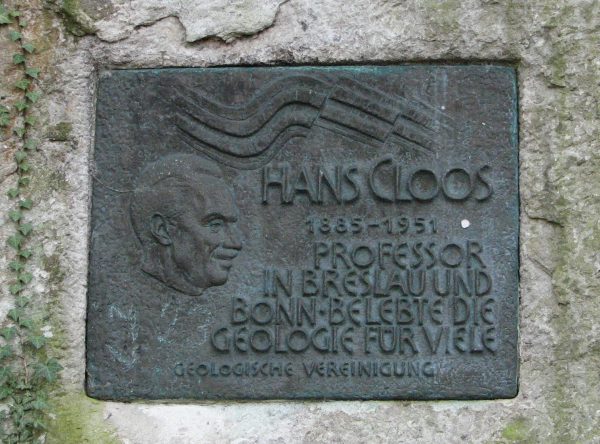 On November 8, 1885, German structural geologist Hans Cloos was born. Cloos became known throughout Europe as the author of a textbook (1936) and the extensive monograph Gespräch mit der Erde (1947), whose clear language and self-drawn illustrations made geology comprehensible to the general public. He was a pioneer in the study of granite tectonics (the deformation of crystalline rocks) and in model studies of rock deformation.

Hans Cloos was born in Magdeburg, Germany, as the son of the government building councilor Ulrich Cloos and his wife Elisabeth, née Heckel. At the age of two, Cloos and his parents moved to Kleinblittersdorf near Saarbrücken, where his mother came from. In Saarbrücken, Cloos was enrolled in school. As a 13-year-old, he visited the boys’ home of the Protestant Herrnhut Brotherhoods in Königsfeld in the Black Forest for one year. In 1901, at the age of 16, he had to move to Cologne because his father was transferred there. Here he attended the Gymnasium Kreuzgasse grammar school until his final examination in 1905, when Cloos showed a great talent for languages and cello playing during his school days in Cologne. His mother was an artistically and musically gifted woman who transferred this gift to her son. In addition, he had a high talent for drawing. These versatile talents made it difficult for him to make a career choice that matched his suitability. In 1905 he began studying architecture at the RWTH Aachen University.

Due to his keen interest in natural sciences, he decided to transfer his studies completely to geology, especially after an interview with the geologist and paleontologist Eduard Holzapfel. In the same year he moved to Bonn University. In May 1906 he moved to the University of Jena to listen to famous geologist Johannes Walther‘s lectures. At that time his father died in Cologne, his mother moved to the Black Forest, which led him to move to live with his mother, so that he could support her better as the eldest son. He enrolled at the University of Freiburg in order to continue his studies with Gustav Steinmann and Wilhelm Deecke. In 1910, Cloos earned his PhD under the supervision of Wilhelm Deecke with the topic “Tafel- und Kettenland im Basler Jura“.

After finishing his studies, his uncle gave him the opportunity to do research work in what was by then German South West Africa. There, Cloos was able to deepen his practical knowledge and to explore the granite stick of the Erongo Mountains, among other things. In 1911, he accepted a two-year contract from a US subsidiary of the Standard Oil Company to carry out geological explorations on Java and Borneo. At that time, oil was not yet searched for with reflection seismics, but by means of geological surface mapping. During these two years, Cloos gained unusually rich practical experience in deposit science, prospection and exploration.

Professor of Geology in Breslau

In 1914 Cloos earned his habilitation in Marburg under Emanuel Kayser with the thesis “Jura-Ammoniten aus dem Molukkengebiet“. During this time he worked at the Harz edge at Goslar and was able to prove that the occurrence of chalk wedges, which are stuck in over-tipped Jurassic limes, was a consequence of the bending deformations during the resin folding. During the First World War, he worked in Silesia at Krupp Mining for the supply of nickel, which was important for steel production. In 1917, he was appointed professor of geology in Breslau (Wroclaw). In 1919, at the age of 34, Cloos was appointed the chair for geology at the University of Wroclaw, which had become vacant following the death of Fritz Frech.

In the following years, Cloos found a mountain range in Silesia made of similar granite as the one in Erongo, Africa. He researched this granite for several years to clarify the question of traces of movement. After many years of observations and measurements, he succeeded in reconstructing the motion processes of solidified intrusive bodies. These methods, which he developed and applied, were referred to in the following literature as “granite tectonics“. In 1926, at the age of 41, Cloos was appointed professor at the University of Bonn to succeed Gustav Steinmann. From there he made research trips to North America starting in 1927, where he found out that the huge granite pluton of the Sierra Nevada has the same construction elements and the same structure as the smaller granite stick of the Krkonoše Mountains. He also visited the Grand Canyon in Colorado and the meteor crater of Arizona on his travels to America.

From Bonn he made study trips to the Scandinavian countries, which resulted in his work “Construction and movement of the mountains in North America, Scandinavia and Central Europe“. Cloos began to investigate the distortions of the Oslograben, in particular the boundaries of mutually moving slabs of the earth’s crust. This research work was the beginning of his many years of investigation into the problems of fault and ditching, which he contributed greatly to understanding in the following decade through field observations and tectonic experiments. Cloos conducted experiments with wet clay in order to simulate mountain movements. He found out that the deformation of the clay takes place at the shear planes and crevices during slow deformation, analogous to the ditch zones of the earth’s crust.

The Siebengebirge mountains near Bonn, Germany, were often used by Cloos and his younger brother Ernst Cloos, also an internationally active geologist and professor at Johns Hopkins University as a geological exploration destination. Hans Cloos researched specifically the structure of the earth’s crust in the structure of granites in the Siebengebirge region. Careful measurements and observations showed that the position of the vent and the shape of the melt ascent were mapped in the arrangement of the crystals brought from the depths. Hw was able to reconstruct the former form of the dragon’s rock by means of the feldspars, known as sanidine, which had cooled down in the rock. He subsequently proved that the sanidines cooled off in the flow direction of the magma. Thereby, it became possible to calculate the former height of the dragon’s rock, which was about 80 meters higher than today’s height.

“For a billion years the patient earth amassed documents and inscribed them with signs and pictures which lay unnoticed and unused. Today, at last, they are waking up, because man has come to rouse them. Stones have begun to speak, because an ear is there to hear them. Layers become history and, released from the enchanted sleep of eternity, life’s motley, never-ending dance rises out of the black depths of the past into the light of the present. ”
— Hans Cloos, Conversation with the Earth (1954), 4

From 1938 to 1951 he was editor-in-chief of the Geological Association. His great literary ability helped the Geological Review to attain an above-average level and international reputation. In 1948, the Geological Society of America awarded him its highest award, the Penrose Medal. Among his many publications are pioneering work on granite tectonics, deep volcanic activity and especially on the development of volcanic activity. His own hypothesis of the formation of the continents made him an opponent of Alfred Wegener. In 1936 he completed his textbook “Introduction to Geology“, which contains many illustrations drawn by Cloos himself. In 1947 Cloos published his book “Talking with the Earth“. With this book, at the latest, he became known worldwide as an imaginative geologist who has reconsidered the origins of granites and volcanoes and drawn them in a distinctive way.

Shortly before his 66th birthday, Cloos died of a severe heart disease in 1951.