You are here: Home › mathematics › Henry Briggs and the Popularization on Logarithms 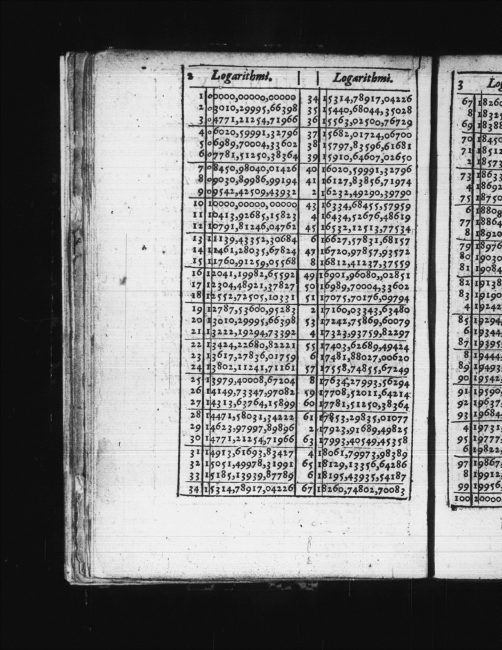 A page from Henry Briggs’ 1617 Logarithmorum Chilias Prima showing the base-10 (common) logarithm of the integers 0 to 67 to fourteen decimal places.

On January 26, 1630, English mathematician and committed puritan Henry Briggs passed away. He is notable for changing the original logarithms invented by John Napier into common (base 10) logarithms, which are sometimes known as Briggsian logarithms in his honour.

Henry Briggs was born in Halifax, however, his exact date of birth remains unknown. His early family life is also not too well known, but it is believed that he became very proficient at Greek and Latin during his education at a grammar school near Warley Wood. Briggs studied at Cambridge from 1577, becoming a Bachelor of Arts in 1581, a Master of Arts in 1585 and a Fellow of St John’s College, Cambridge, in 1588. In 1592 he became an examiner in mathematics, soon afterwards a lecturer in medical lectures (“Reader of the Physic Lecture founded by Dr Linacre“) at the Royal College of Physicians of London and in 1596 professor of geometry at the then only a few years old Gresham College in London.

At the time of Briggs, the great universities of Oxford and Cambridge had largely lost their scientific significance and had remained stuck in medieval ideas of science. However, as a rising naval power, England urgently needed the dissemination and development of modern mathematical techniques for navigation, so Thomas Gresham donated a college in which various professors were to give public lectures on modern topics “in their mother tongue”.[6] At Gresham College Briggs formed the nucleus of a circle of modern Copernicans, among them the famous navigator and applied mathematician Edward Wright, the natural philosopher William Gilbert, the popularizer of scientific ideas Thomas Blundeville and others. Gilbert’s epochal work “De Magnete” was written, in which Wright and Briggs had a share. During this time Briggs worked intensively on questions of navigation. Some of his work can be found in Wright’s “On Certain Errors in Navigation” and in Blundeville’s books.

In his active period at Gresham, it has been found that Briggs was quite enthusiastic about astronomy, notably supporting the new ideas of Johannes Kepler [4], and was corresponding with James Ussher at Trinity College, Dublin. Briggs’ interest revolved around eclipses in particular. It is believed that he read Napier’s work on logarithms in order to help his astronomical calculations.[3] Back then, Briggs was already involved in producing tables to help complex calculations and he already published two tables before even finding out about Napier’s logarithms. When Briggs read Napier’s work on logarithms, he wrote to James Ussher:

Napper, lord of Markinston, hath set my head and hands a work with his new and admirable logarithms. I hope to see him this summer, if it please God, for I never saw a book which pleased me better or made me more wonder. [1]

Already during a visit to Napier in Scotland in 1615 he suggested using base 10 for the logarithms. Therefore the logarithms for base 10 are also called Briggs’ logarithms or decadic logarithms. From then on Briggs worked intensively on the calculation of logarithms, and in less than seven years he determined 30,000 logarithms to 14 decimal places. However, Briggs noticed a few problems with Napier’s calculations. He discussed that it causes major difficulties that Napier log 1 does not equal 0. Interesting is however, that even though Briggs is widely made responsible for the change to logarithms with log 1 = 0, the scientist himself gives the credit for the idea to Napier. It is believed that the idea evolved in discussions between Napier and Briggs. Briggs’ first work on logarithms, titled as ‘Logarithmorum Chilias Prima‘ was published in 1617 and John Napier died in the same year. [1,2] His real achievements in this field lie in a groundbreaking new method of calculating logarithms by means of continued root extraction. In doing so, he not only established the difference calculation, but also discovered Newton’s binomial theorem for the special case exponent 0.5. 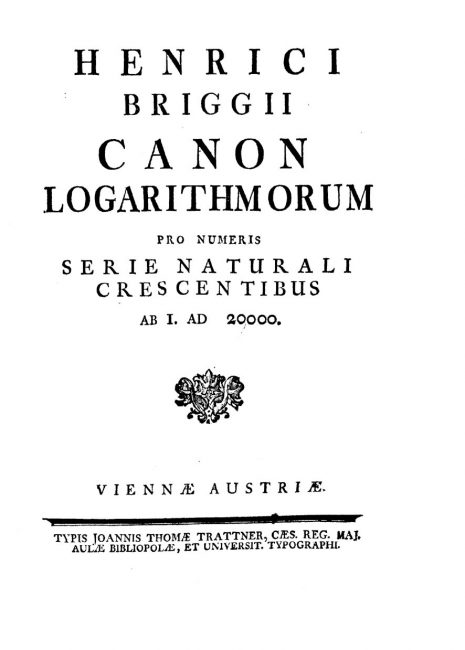 Henry Briggs’ mathematical treatise Arithmetica Logarithmica was published in 1624 and the author gave logarithms of the natural numbers from 1 to 20,000 and 90,000 to 100,000 computed to 14 decimal places. Further, the work introduced tables of natural sine functions, tan, and sec functions. [1] In 1619 Briggs became the first Savilian Professor of Geometry at Merton College, Oxford. In addition to his work on logarithms, he worked on the cartography of North America, shipbuilding plans and the construction of a canal.  He was certainly one of the greatest mathematicians of his time and as a bearer and disseminator of modern scientific ideas in England should not be underestimated. 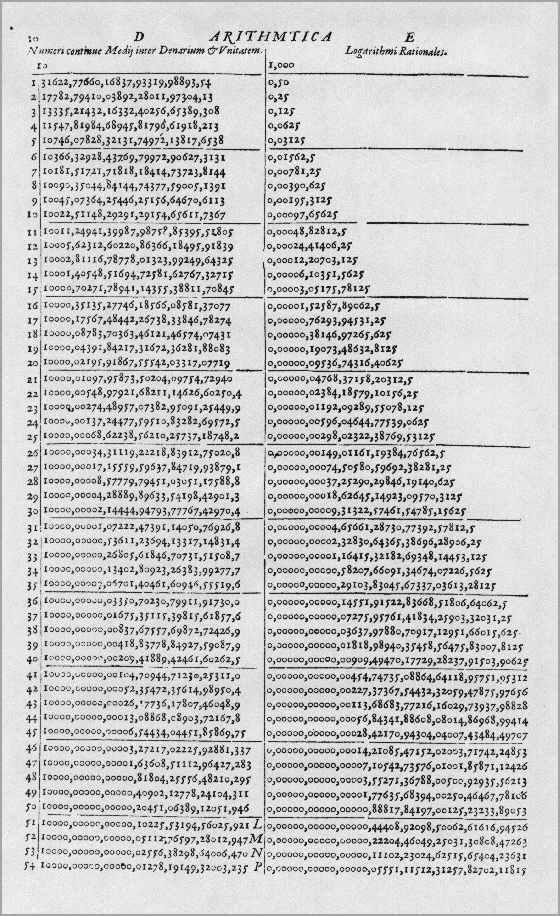 Roots of 10 from Arithmetica Logarithmica by Henry Briggs, 1624

Henry Briggs died on 26 January 1630, and was buried in the chapel of Merton College, Oxford. Typical for a Puritan is the completely unadorned gravestone, which only bears the inscription “Henricus Briggius”. He was certainly one of the greatest mathematicians of his time and should not be underestimated as a carrier and disseminator of modern scientific ideas in England.In the Lives of the Gresham Professors, Briggs is characterized as a man of great probity, a condemner of riches, and contented with his own station, preferring a studious retirement to all the splendid circumstances of life.[8]

Roy Wilson, The Early Professors of Geometry at Gresham College, [10]