You are here: Home › economics › Thomas Gresham and the London Royal Exchange 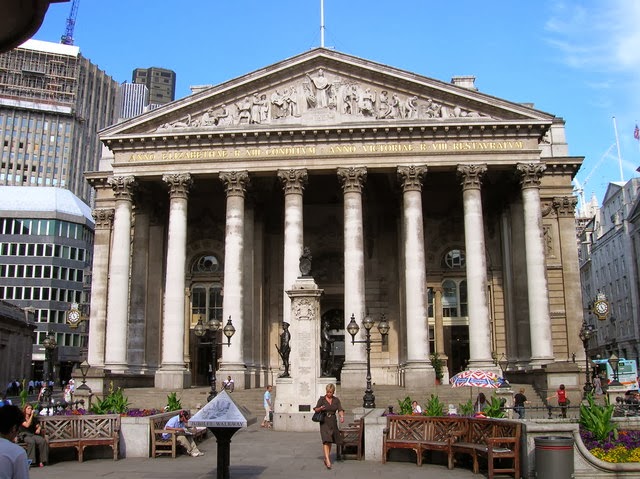 On January 23, 1571, the Royal Exchange in London was founded by the merchant Thomas Gresham to act as a centre of commerce for the City of London.

On the afternoon of January 23rd, 1571, Queen Elizabeth [8] went from her Palace of Somerset House to dine with Sir Thomas Gresham at his fine mansion in Austin Friars. She went in state with her Trumpeters and Halberdiers, with Sir Thomas Gresham upon her right hand, and upon her left the French Ambassador, Monsieur La Motte Fenelon. Sir Thomas was a person of much importance in the Realm. He was a member of the Mercers’ Company which was established as long ago as 1172.  He was the Royal Agent in the Low Countries, and by other important services had Her Majesty in his debt. We have no record, worse luck, of what passed between her and Sir Thomas Gresham. But no doubt she whispered to him her intention to dignify his Exchange with the epithet of “Royal“.[1] After dinner her majesty was pleased to proceed to the Royal Exchange and visited every part of it. 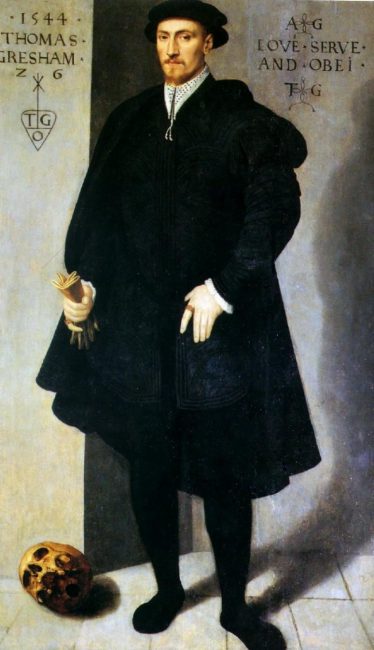 A Convenient Building for Merchants to Meet in

Thus, the Royal Exchange was also officially opened by Queen Elizabeth I who awarded the building its royal title as well as the license to sell alcohol.[8] The incentive for Sir Thomas Gresham to build the Royal Exchange was initiated by his foreign correspondent and agent, Richard Clough, who had originally been his servant, and was afterwards knighted, having reproached the English merchants with transacting their business more like pedlars than men of their commercial consequence, and that no foreign trading city was without a commodious place for the public transaction of business. Stimulated by this sarcasm, Thomas Gresham proposed to the corporation of London to erect, at his own expence, a convenient building for merchants to meet in, provided they would procure him a convenient spot for that purpose. Sir Thomas accordingly laid the first stone on the 7th of June, 1566; and in the month of November in the following year, it was completed, under the name of The Bourse.[2] 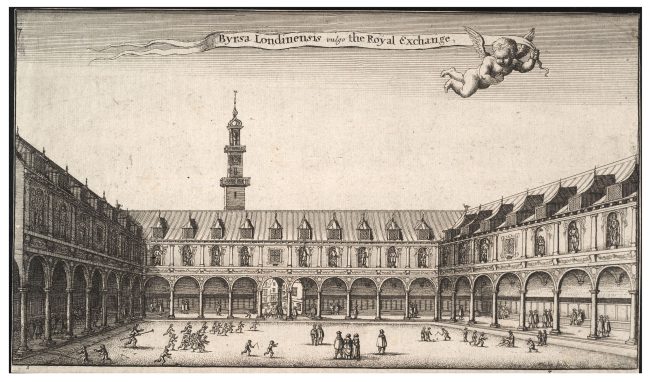 The original Royal Exchange in an engraving by Wenceslaus Hollar

About the Rude Manners of Stockbrokers

During the 17th century, stockbrokers were not allowed in the Royal Exchange because of their rude manners, hence they had to operate from other establishments in the vicinity, such as Jonathan’s Coffee-House. Gresham’s original building was destroyed in the Great Fire of London in 1666 [4]. Samuel Pepys wrote in his famous diary on Sep. 5, 1666 [5]:

“The Exchange a sad sight, nothing standing there, of all the statues or pillars, but Sir Thomas Gresham’s picture (statue) in the corner . . . I also did see a poor cat taken out of a hole in the chimney, joining to the wall of the Exchange, with hair all off the body, and yet still alive.”

A second complex was built on the site, designed by Edward Jarman, and opened in 1669, but was also destroyed by fire on 10 January 1838. It had been used by the Lloyd’s of London insurance market, which was forced to move temporarily to South Sea House following the 1838 fire. The third Royal Exchange building, which still stands today, was designed by William Tite and adheres to the original layout – consisting of a four-sided structure surrounding a central courtyard where merchants and tradesmen could do business. It was opened by Queen Victoria  on 28 October 1844, though trading did not commence until 1 January 1845. In June 1844, just before the reopening of the Royal Exchange, a statue of Arthur Wellesley, the first duke of Wellington, was inaugurated outside the building. It was sculpted from enemy cannon captured during Wellington’s victorious battles. Paul Julius Reuter established the Reuters news agency at No. 1, Royal Exchange Buildings (opposite and to the east of the Royal Exchange) in 1851.  With the outbreak of the Second World War, trading at the Royal Exchange virtually ended. At the War’s end, the building had survived the Blitz, albeit with some near misses.