You are here: Home › mathematics › Henri Poincaré – the Last Universalist of Mathematics 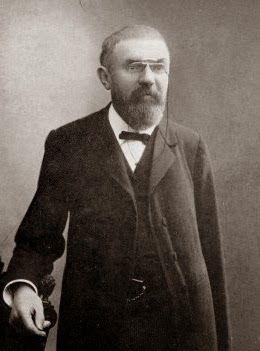 On April 29, 1854, French mathematician, theoretical physicist, engineer, and a philosopher of science Henri Poincaré was born. He is often described as a polymath, and in mathematics as The Last Universalist since he excelled in all fields of the discipline as it existed during his lifetime.

“A scientist worthy of the name, above all a mathematician, experiences in his work the same impression as an artist; his pleasure is as great and of the same nature. …we work not only to obtain the positive results which, according to the profane, constitute our one and only affection, as to experience this esthetic emotion and to convey it to others who are capable of experiencing it.”
— Henri Poincaré, “Notice sur Halphen,” Journal de l’École Polytechnique (Paris, 1890)

Jules Henri Poincaré was born in Nancy, Meurthe-et-Moselle, France, to Léon Poincaré, professor of medicine at the University of Nancy, and his mother Eugénie Launois. He excelled in every class from the very beginning. It is assumed that his mother had a conversation with his teacher, when he was about 13 years old. The teacher told her that “Henri will become a mathematician … I would say a great mathematician“. However, when Poincare graduated in 1871 and only received the grade ‘fair’ in science. In mathematics, Poincare received zero points, it is assumed that he answered the wrong questions. In 1873, Poincare enrolled at the École Polytechnique and again, he excelled in every subject, but graduated only as the second in class due to his inability to draw in 1875. After completing his studies at the École des Mines Poincaré spent a short while as a mining engineer at Vesoul while completing his doctoral work. As a student of Charles Hermite, Poincaré received his doctorate in mathematics from the University of Paris in 1879 with a dissertation on partial differential equations. Subsequently, he was then put in charge of the course on differential and integral calculus at the University of Caen.

In 1880, the mathematician made use of non-Euclidean geometry for the first time and resolved a problem in the theory of differential equations to the competition for the grand prize in mathematics of the Academy of Sciences in Paris. He was put on the faculty of sciences at the University of Paris and later on, he succeeded Gabriel Lippmann in the chair of mathematical physics and probability. Poincare switched institutes and universities a lot in the next years, and in 1904, he became professor of general astronomy at the École Polytechnique.

“To doubt everything or to believe everything are two equally convenient solutions; both dispense with the necessity of reflection.”
– Henry Poincaré, Science and Hypothesis (1901)

Poincare managed to make significant contributions to classical mechanics and even more important, he was able to publish a founding document in chaos theory. Poincare showed that general, the stability of n-body systems (like the solar system) cannot be demonstrated. In this context, he also proved his recurrence theorem. Poincaré’s Analysis situs Ⓣ, published in 1895, is an early systematic treatment of topology. He can be said to have been the originator of algebraic topology and, in 1901, he claimed that his researches in many different areas such as differential equations and multiple integrals had all led him to topology.[4]

Poincaré sphere, on or beneath which the three Stokes parameters [S1, S2, S3] (or [Q, U, V]) are plotted in Cartesian coordinates

In this way he was able to conclude that these two spaces were, indeed, different. Pointcare also wondered whether a 3-manifold with the homology of a 3-sphere and also trivial fundamental group had to be a 3-sphere. In November 2002, Russian mathematician Grigori Perelman published his outline of a solution of the Poincaré conjecture and four years later Perelman was awarded, but declined, the Fields Medal for his proof. In 2010, the Clay Mathematics Institute awarded Perelman the $1 million Millennium Prize in recognition of his proof, which he rejected as well.

In applied mathematics Poincaré studied optics, electricity, telegraphy, capillarity, elasticity, thermodynamics, potential theory, quantum theory, theory of relativity and cosmology. In the field of celestial mechanics he studied the three-body-problem, and the theories of light and of electromagnetic waves. He is acknowledged as a co-discoverer, with Albert Einstein and Hendrik Lorentz, of the special theory of relativity.[1] Poincaré became the president of the French Academy in 1906 and was elected to the Académie Française in 1908. During his lifetime, Henri Poincaré published over five hundred scientific papers and over thirty books. He passed away on July 17, 1912 in Paris at age 58.