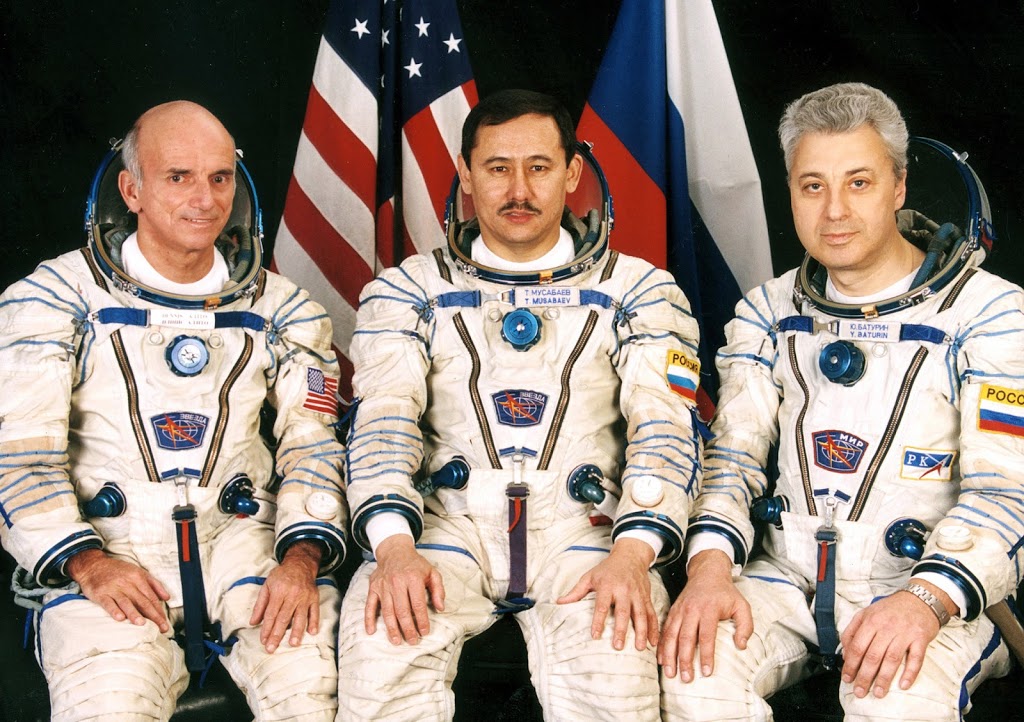 On April 28, 2001, American engineer and multimillionaire Dennis Tito joined the Soyuz TM-32 mission to the International Space Station ISS, spending 7 days, 22 hours, 4 minutes in space and orbiting Earth 128 times. He paid $20 Mio for his trip, which made him the very first space tourist in history.

Who ever thought that space tourism would become possible? To travel in space simply for recreational, leisure or business purposes. Of course, up to now, traveling to space is only reserved for the very rich people, who are able to afford this luxury – flights brokered by Space Adventures to the International Space Station aboard a Russian Soyuz spacecraft have been US $20–40 million. But, with Space Ship One traveling to the border of outer space and experiencing zero gravity has become affordable for a few more but only the very richest.[2] Will traveling to space ever become a mass phenomenon? Who knows. But, today, we will tell you the story of the very first space tourist Dennis Tito.

The end of the Space Race, culminating in the Moon landings, decreased the emphasis placed on space exploration by national governments and therefore led to decreased demands for public funding of manned space flights. The Soviet space program was aggressive in broadening the pool of its cosmonauts by including cosmonauts selected from Warsaw Pact members. Also the U.S. space shuttle program included payload specialist positions which were usually filled by representatives of companies or institutions managing a specific payload on that mission, who did not receive the same training as professional NASA astronauts. In 1984, Charles D. Walker became the first non-government astronaut to fly, with his employer McDonnell Douglas paying $40,000 for his flight. After Perestroika in Russia, its space industry was especially starved for cash. The Tokyo Broadcasting System (TBS) offered to pay for one of its reporters to fly on a mission. For $28 million, Toyohiro Akiyama was flown in 1990 to space station Mir.[3, 4]

At the end of the 1990s, MirCorp, a private venture that was by then in charge of the space station, began seeking potential space tourists to visit Mir in order to offset some of its maintenance costs. Dennis Tito, an American businessman and former NASA Jet Propulsion Laboratory scientist, became their first candidate. When the decision to de-orbit Mir was made, Tito managed to switch his trip to the International Space Station (ISS). In 1972, Dennis Tito had founded Wilshire Associates, a leading provider of investment management, consulting and technology services in Santa Monica, California, serving an international clientele representing assets of $71 billion. Wilshire relies on the field of quantitative analytics, which uses mathematical tools to analyze market risks. Despite a career change from aerospace engineering to investment management, Tito remained interested in space. Tito was accepted by the Russian Federal Space Agency as a candidate for a commercial spaceflight. Although, he met criticism from NASA before the launch, because NASA considered it inappropriate for a tourist to take a ride into space. When Tito arrived at the Johnson Space Center for additional training on the American portion of the ISS, NASA refused to provide training for Dennis Tito. Thus, later through an arrangement with space tourism company Space Adventures, Ltd., Tito joined the Soyuz TM-32 mission on April 28, 2001, spending 7 days in space, while he performed several scientific experiments in orbit useful for his company. Tito paid a reported $20 million for his trip.

Dennis Tito should not be the last space tourist. Only about a year later South African entrepreneur Mark Shuttleworth followed him on board a Soyuz mission to the ISS. And the list of space tourists continues, although the costs have risen to almost $40 million for the trip.