You are here: Home › mathematics › Henri Léon Lebesgue and the Theory of Integration 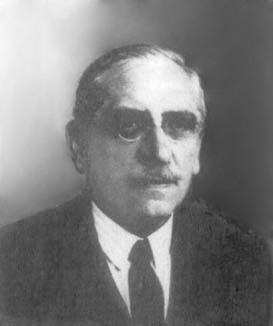 On June 28, 1875, French mathematician Henri Léon Lebesgue was born. He is best known for his theory of integration, which was a generalization of the 17th century concept of integration, i.e. summing the area between an axis and the curve of a function defined for that axis. By extending the work of Camille Jordan and Émile Borel on the Riemann integral, Lebesgue provided a generalization that solved many of the difficulties in using Riemann‘s theory of integration.

I heard of Lebesgue the first time in my basic analysis lectures during my first year at university. The funny thing I remember was that the analysis lab curses were taught by an older assistant with a rather heavy Saxonian accent. When we did the important proofs in integral calculus, he was always referring to Cauchy,[4] Lebesgue and Riemann,[5] and he had a very peculiar way to pronounce their names. Thus, when I read one of the names today, I immediately have his voice and his (funny) accent in my ears. But, let’s have a look at Lebesgue and his achievements.

“In my opinion a mathematician, in so far as he is a mathematician, need not preoccupy himself with philosophy—an opinion, moreover, which has been expressed by many philosophers.
— Henri-Léon Lebesgue, as quoted in [13]

Henri Lebesgue was born in Beauvais, Oise, as son of a typesetter and a school teacher. His parents assembled at home a library that the young Henri was able to use. Unfortunately, Lebesgue‘s father died of tuberculosis when Henri was still very young and his mother had to support the family by herself. As he showed a remarkable talent for mathematics in primary school, one of his instructors arranged for community support to continue his education at the Collège de Beauvais and then at Lycée Saint-Louis and Lycée Louis-le-Grand in Paris.

Lebesgue entered the École Normale Supérieure in Paris in 1894 and was awarded his teaching diploma in mathematics in 1897. He was appointed professor at the Lycée Centrale at Nancy where he taught from 1899 to 1902. Building on the work of others, including that of Émile Borel [6] and Camille Jordan,[7] Lebesgue formulated the theory of measure in 1901 and in his famous paper Sur une généralisation de l’intégrale définie (1901), he gave the definition of the Lebesgue integral that generalises the notion of the Riemann integral by extending the concept of the area below a curve to include many discontinuous functions – a work that revolutionised the integral calculus. Up to the end of the 19th century, mathematical analysis was limited to continuous functions, based largely on the Riemann method of integration.[1] Moreover, artificial restrictions were necessary to cope with discontinuities that cropped up with greater frequency as more exotic functions were encountered. The Riemann method of integration was applicable only to continuous and a few discontinuous functions. [2]

The Theory of Integration

The first theory of integration was developed by Archimedes in the 3rd century BC with his method of exhaustion, but this could be applied only in limited circumstances with a high degree of geometric symmetry. In the 17th century, Isaac Newton and Gottfried Wilhelm Leibniz [8] discovered the idea that integration was intrinsically linked to differentiation – a relationship which today is known the Fundamental Theorem of Calculus. However, mathematicians felt that Newton‘s and Leibniz‘s integral calculus did not have a rigorous foundation.[8] In the 19th century, Augustin Cauchy developed epsilon-delta limits, and Bernhard Riemann followed up on this by formalizing what is now called the Riemann integral. To define this integral, one fills the area under the graph with smaller and smaller rectangles and takes the limit of the sums of the areas of the rectangles at each stage. For some functions, however, the total area of these rectangles does not approach a single number. As such, they have no Riemann integral.

The Lebesgue integral is a generalisation of the integral introduced by Riemann in 1854. In the folowing decades a measure-theoretic viewpoint was gradually introduced, most prominently by Camille Jordan’s treatment of the Riemann integral in his Cours d’analyse (1893). Placing integration theory within a measure-theoretic context made it possible for Lebesgue to see that a generalisation of the notions of measure and measurability carries with it corresponding generalisations of the notions of the integral and integrability. Building on the work of Émile Borel, Lebesgue completed Borel’s definitions of measure and measurability so that they represented generalisations of Jordan’s definitions and then used them to obtain his generalization of the Riemann integral.[3]

Lebesgue‘s idea was to first define measure, for both sets and functions on those sets. He then proceeded to build the integral for what he called simple functions; measurable functions that take only finitely many values. Then he defined it for more complicated functions as the least upper bound of all the integrals of simple functions smaller than the function in question.

In 1902 Lebesgue earned his Ph.D. from the Sorbonne with the seminal thesis on Integral, Length, Area, submitted with Borel as advisor. Subsequently, Lebesgue was offered a position at the University of Rennes, lecturing there until 1906, when he moved to the Faculty of Sciences of the University of Poitiers. This was in keeping with the standard French tradition of a young academic first having appointments in the provinces, then later gaining recognition in being appointed to a more junior post in the capital. In 1910 Lebesgue moved to the Sorbonne as a maître de conférences, being promoted to professor starting with 1919. In 1921 he left the Sorbonne to become professor of mathematics at the Collège de France, where he lectured and did research for the rest of his life.

In 1922 Lebesgue was elected a member of the Académie française. Henri Lebesgue died on 26 July 1941 in Paris.