You are here: Home › chemistry › Auguste Laurent and Organic Chemistry 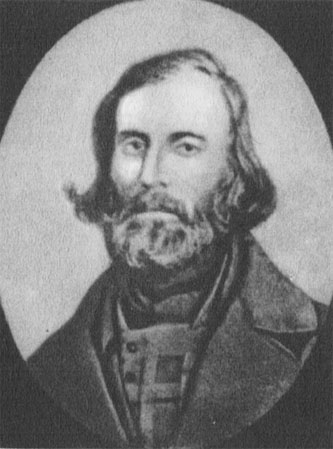 On November 14, 1807, French chemist Auguste Laurent was born. Laurent developed organic chemistry as a distinct science. For a while, he assisted Jean Dumas, and extended his work, understanding organic compounds as derivatives of hydrocarbon molecules. He devised a systematic nomenclature for organic chemistry based on structural grouping of atoms within molecules to determine how the molecules combine in organic reactions.

Auguste Laurent was born in the district of La Folie in the municipality of Saint-Maurice near Langres, France, as the second of four children to the farmer Jean-Baptiste Laurent and Marie-Jeanne Maistre. In Gray (Haute-Saône) he received a classical education at one of the local Collèges. From 1826 to 1829 he attended the École des Mines, and after graduation in June 1830 he became engineer civil des mines, and in 1831 répétiteur at the École Centrale des Arts et Métiers. In 1830, he published his first scientific paper together with Guy-Adolphe Arrault: Fabrication du smalt ou bleu de cobalt, à Querbach, en Basse-Silésie (Manufacture of smalt or cobalt blue in Querbach, Lower Silesia), in which he presented experiences of the cobalt mining he gained during a trip through Lower Silesia.

“Exile” in the Provinces

Laurent was a student of the chemist Jean-Baptiste Dumas, the leading French chemist best known for his works on organic analysis and synthesis, as well as the determination of atomic weights (relative atomic masses) and molecular weights by measuring vapor densities. After a dispute with Dumas, he was employed in 1833 at the Manufacture de Sévres and in 1836 at a porcelain factory in Eich (Luxembourg). In 1838 he was appointed professor at the University of Bordeaux. Laurent was not happy “in exile” in the provinces, but his seven years in Bordeaux were the most productive of his career.[1] In 1844, he was made knight of the Legion of Honour.

Laurent and Dumas studied naphthalene. Its sum formula (C10H8 or C20H16) could be determined from the elemental analysis. Later on, chrysalis and pyrene were identified. Naphthalene could be converted with chlorine to chloronaphthalene. Since structural formulas were still unknown in chemistry, Laurent could only prove that a hydrogen atom was replaced by a chlorine atom. Naphthalene tetrachloride could also be produced by treatment with chlorine. By oxidation of this substance with nitric acid he produced phthalic acid as well as phthalimide and phthalic anhydride (1836). Laurent obtained the anthraquinone (1835) from anthracene by oxidation with nitric acid. In 1841 he obtained the isatin from the oxidation of the dye indigo. Ethanol and diethyl ether illustrated Laurent as organic derivatives of water. Formally replacing a hydrogen atom of the water with an ethyl group produces ethanol, replacing two hydrogen atoms with ethyl groups produces diethyl ether.

The Chemistry of Organic Molecules

Laurent realized that the number of hydrogen atoms in an organic molecule is always straight, as long as there was no nitrogen. When he started his investigations, there was no clear distinction between atom, molecule and equivalent. Charles Gerhardt had recognized the defectiveness regarding the atomic masses in the light of Avogadro‘s theory for organic molecules.[4] However, the concept of Gerhardt’s equivalent remained very unclear and controversial. Laurent improved Gerhardt’s findings and, for the first time, gave a precise definition of molecules, atoms and equivalents. Laurent understood the molecular weight of an element or compound to mean the amount of weight that took up the same gas space under the same conditions. For gases of the elements hydrogen, chlorine, oxygen and nitrogen, two parts by weight (double atoms) had to be added in the gas space. For organic molecules in the gas space, the correct molecular weights were obtained. For Laurent, the molecule was the smallest amount needed to form a chemical compound. For him, the atom was the smallest amount of an element that occurs in compound materials. It was not until 1850, when Alexander William Williamson made an ether representation of ethanol and ethyl bromide, that it could be demonstrated that ether is a derivative of ethanol and ethanol is a derivative of water.

Since the carbon backbone of hydrocarbons such as naphthalene or anthracene did not change during the conversion of hydrocarbons and only the hydrogen atoms were exchanged by chlorine or oxygen, Laurent formulated the core theory to explain the spatial structure of organic compounds. Dumas has already been able to prove that hydrogen atoms can be replaced by chlorine atoms in candle wax. Together with Justus von Liebig, he coined the term radical substitution. Laurent used the term “radical” for atomic nuclei. Later he also uses it for larger atomic groups. Unlike in inorganic chemistry, organic molecules have carbon atomic nuclei. The carbon stemming nuclei are arranged in a spatial order and can accommodate secondary nuclei of hydrogen, chlorine or oxygen atoms according to geometric and stoichiometric laws. Only a few specific nuclei in the molecule can split off and form a radical. Laurent suspected that trunk nuclei could be located in the centre of a pyramid, while secondary nuclei such as hydrogen, oxygen and halogen atoms are located at the edges of the pyramid, which can be exchanged under certain reaction conditions.

Laurent was granted paid leave of absence from Bordeaux in 1845 after student riots, and his leave of absence was renewed annually until he was appointed assayer to the Paris Mint in 1848. In addition to his official duties in inorganic analysis, he continued his work as one of the more accurate organic analysts of his generation. However, he produced few new theoretical ideas, and his influence on French chemists was limited, partly owing to the hostility of Dumas, who was an influential member of the French Academy of Sciences. Thus, the fact that in 1844 Laurent was one of the first chemists to embrace Avogadro’s law had no immediate influence. In 1850 he was the best-qualified candidate for the chair of chemistry at the Collège de France, but his appointment was vetoed by the Academy of Sciences, some of whose members were worried by his radical republican views in the tense atmosphere of conservative reaction that had set in after the Revolutions of 1848.[1]

Auguste Laurent died of tuberculosis in 1853 at the age of 45.