You are here: Home › physics › The Leyden Jar Introducing the Age of Electricity 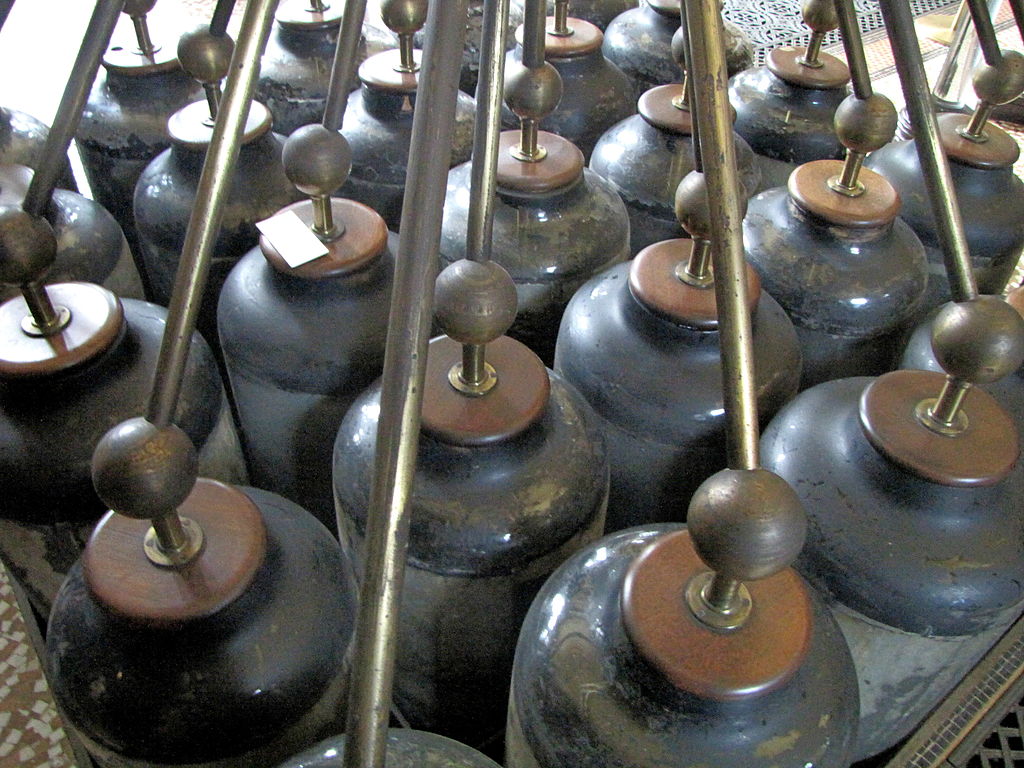 On October 11, 1745, German cleric Ewald Georg von Kleist (and independently of him Dutch scientist Pieter van Musschenbroek from the city of Leiden, Netherlands) invented a predecessor of today’s battery, the Leyden Jar. The jar worked in principle like a capacitor for the storage of electrical energy and was used to conduct many early experiments in electricity. Its discovery was of fundamental importance in the study of electricity. In the times before its invention, researchers had to resort to insulated conductors of large dimensions to store a charge. The Leyden jar provided a much more compact alternative and initiated what is often referred to as the early age of electricity.

From the Ancient Greeks to Early Friction Machines

Even the Ancient Greeks already knew that pieces of amber could attract lightweight particles after being rubbed. The amber becomes electrified by triboelectric effect, mechanical separation of charge in a dielectric. The Greek word for amber is ἤλεκτρον (“elektron“) and is the origin of the word “electricity“. But, this electrostatic effect could only be established temporarely. What was missing for a long time, was some means to store electric energy over the time. In the 17th century Otto von Guericke built a first mechanical electrostatic generator that consisted out of a sulphur ball rotating on a shaft. When Guericke held his hand against the ball and turned the shaft quickly, a static electric charge built up.[3] This experiment inspired the development of several forms of “friction machines”, that greatly helped in the study of electricity.

Design of a Leyden Jar

The idea for the Leyden jar was discovered independently by German scientist and jurist Ewald Georg von Kleist and the Dutchman Pieter van Musschenbroek. Their opinion about the nature of electricity was that they saw it as a kind of liquid and hoped to develop the jar to capture this fluid [1]. In 1744 von Kleist lined a glass jar with silver foil, and charged the foil with the help of a friction machine. He was convinced that a substantial electric charge could be collected when he received a significant shock from the device. Von Kleist wrote about in in a letter:

“When a nail, or a piece of thick brass wire, is put into a small apothecary’s phial and electrified, remarkable effects follow; but the phial must be very dry, or warm. I commonly rub it over beforehand with a finger on which I put some pounded chalk. If a little mercury or a few drops of spirit of wine be put into it, the experiment succeeds better. As soon as this phial and nail are removed from the electrifying-glass, or the prime conductor, to which it has been exposed, is taken away, it throws out a pencil of flame so long that, with this burning machine in my hand, I have taken above sixty steps in walking about my room. When it is electrified strongly, I can take it into another room and there fire spirits of wine with it. If while it is electrifying I put my finger, or a piece of gold which I hold in my hand, to the nail, I receive a shock which stuns my arms and shoulders.”[2]

Independently from Kleist’s findings the Dutch scientists Pieter van Musschenbroek and Cunaeus at the University of Leiden also came up with the same idea.[4] But, because Musschenbroek communicated on it with the French scientific community, the developed device was called the ‘Leyden jar’ in favor of the Dutchmen. Various documents also mention Andreas Cunaeus (1712-1788) as co-inventor and friend of Musschenbroek, while others erroneously equate Musschenbroek with Cunaeus by the name in brackets. In Germany however, the device was referred to as “Kleistian jar” (Kleistsche Flasche).

“I’ve found out so much about electricity that I’ve reached the point where I understand nothing and can explain nothing.”
— Pieter van Musschenbroek, in a Letter to Réamur (20 Jan 1746), in [5]

The Design of the Leyden Jar

A typical design of a Leyden jar consists of a glass jar with conducting metal foil coating the inner and outer surfaces. The foil coatings stop short of the mouth of the jar, to prevent the charge from arcing between the foils. A rod electrode projects through the mouth of the jar, electrically connected by some means (usually a chain) to the inner foil, to allow it to be charged. The jar is charged by an electrostatic generator, or other source of electric charge, connected to the inner electrode while the outer foil is grounded. The inner and outer surfaces of the jar store equal but opposite charges.

The final shape of the Leiden jar was created in 1748 by the two London doctors William Watson and John Bevis. They both dispensed with the liquid and covered the inside and outside walls of the bottle with tin foil, known as tin foil. The Gdansk physicist Daniel Gralath the Elder connected several Leiden bottles to form a battery for the first time and was thus able to increase the effect by connecting them in parallel.

During the public demonstrations of electricity, which were popular in the 18th and until the beginning of the 19th century, the “Kleistian shock”  was also demonstrated, in which a human chain was struck from a Leyden jar, causing the test subjects to twitch. These experiments remained popular even after the Nuremberg mathematics teacher Johann Gabriel Doppelmayr died in 1750 from the blow of a Leiden jar.