You are here: Home › chemistry › Harry Coover and the Invention of Super Glue 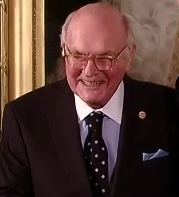 On March 6, 1917, American chemist and inventor Harry Wesley Coover Jr was born. He is best known for having invented Eastman 910, better known as super glue. Super Glue is based on cyanoacrylates, a family of strong fast-acting adhesives with industrial, medical, and household uses.

Harry Coover was born in Newark, Delaware, and attended Hobart College, where he earned his Bachelor of Science degree. For his later studied, Coover moved to Cornell University where he received his Master of Science and Ph. D. Coover worked for Eastman Kodak as a chemist and in 1973, he became its Vice President for research and development until 1984. In 1951, Coover had moved to Eastman Kodak’s chemical plant in Kingsport Tennessee.

In the 1940s, it is believed that Coover and his colleagues at Eastman Kodak worked on transparent plastic gun sights, accidentally coming across cyanoacrylates. The material was used during the World Wars on large cuts and wounds instead of stitches. However, the team dismissed the idea of using the material for gun sights since it stuck to everything with which it came in contact.

Several years later in 1951, chemists at the company attempted to research on heat-resistant polymers for jet canopies when cyanoacrylates were once again tested and proved too sticky. Probably around this time, Harry Coover and his colleague, Fred Joyner first realized to have found a so far unique adhesive. In 1958, the adhesive, marketed by Kodak as Super Glue “Eastman #910”, was introduced for sale. The name “Eastman #910” was chosen because, as Coover explained, “You could count 1, 2, 3, 4, 5, 6, 7, 8, 9, 10 and it was bonded.“[7] During the 1960s, Eastman Kodak sold cyanoacrylate to Loctite, which in turn repackaged and distributed it under a different brand name “Loctite Quick Set 404“.

Cyanoacrylates are mainly used as adhesives. They require some care and knowledge for effective use: they do not bond some materials; their shelf life at room temperature is about 12 months unopened and one month once opened; they do not fill spaces, unlike epoxies, and a very thin layer bonds more effectively than a thicker one that does not cure properly; they bond many substances, including human skin and tissues. They have an exothermic reaction to natural fibres: cotton, wool, leather, see reaction with cotton below. 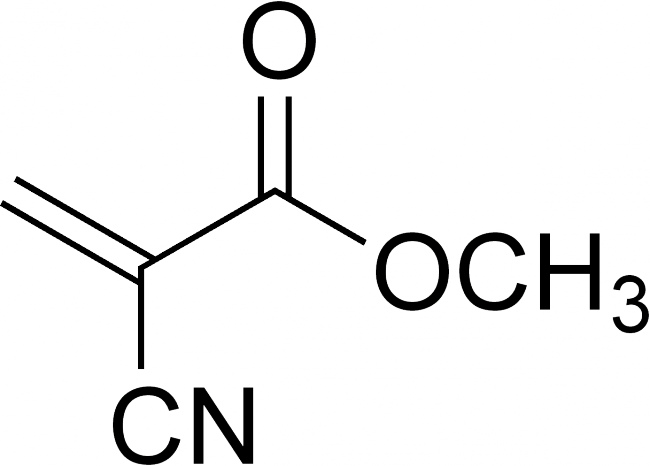 Chemical structure of methyl cyanoacrylate, the basis of Superglue

In its liquid form, cyanoacrylate consists of monomers of cyanoacrylate molecules. Cyanoacrylate itself is an acrylic resin which rapidly polymerizes in the presence of water. It forms long and strong chains and joins the bonded surfaces together. Cyanoacrylate is further used as a forensic tool to capture latent fingerprints on non-porous surfaces like glass as well as plastic. Cyanoacrylate glue was in veterinary use for mending bone, hide, and tortoise shell by the early 1970s or before.

Some rock climbers use cyanoacrylate to repair damage to the skin on their fingertips. Similarly, stringed-instrument players can form protective finger caps (in addition to calluses) with cyanoacrylates. While the glue is not very toxic and wears off quickly with shed skin, applying large quantities of glue and its fumes directly to the skin can cause chemical burns.

While much attention was given to the glue’s capacity to bond solid materials, Coover was also the first to recognize and patent cyanoacrylates as a tissue adhesive after his eldest son cut open his finger while making a model and glued the cut closed with the glue he had samples of from the lab, an early formulation of super glue. First used in the Vietnam War to temporarily patch the internal organs of injured soldiers until conventional surgery could be performed, tissue adhesives are now used worldwide for a variety of suture-free surgical applications.

Coover held 460 patents and Super Glue was just one of his many discoveries. He himself regarded “programmed innovation”, a management method for research and development, as his most important work. Its introduction at Kodak resulted in the discovery of 320 new products and an increase in sales revenue from $1.8 billion to $2.5 billion.  In 2010, Coover received the National Medal of Technology and Innovation.