You are here: Home › geography › Charles Wyville Thomson and the Challenger Expedition 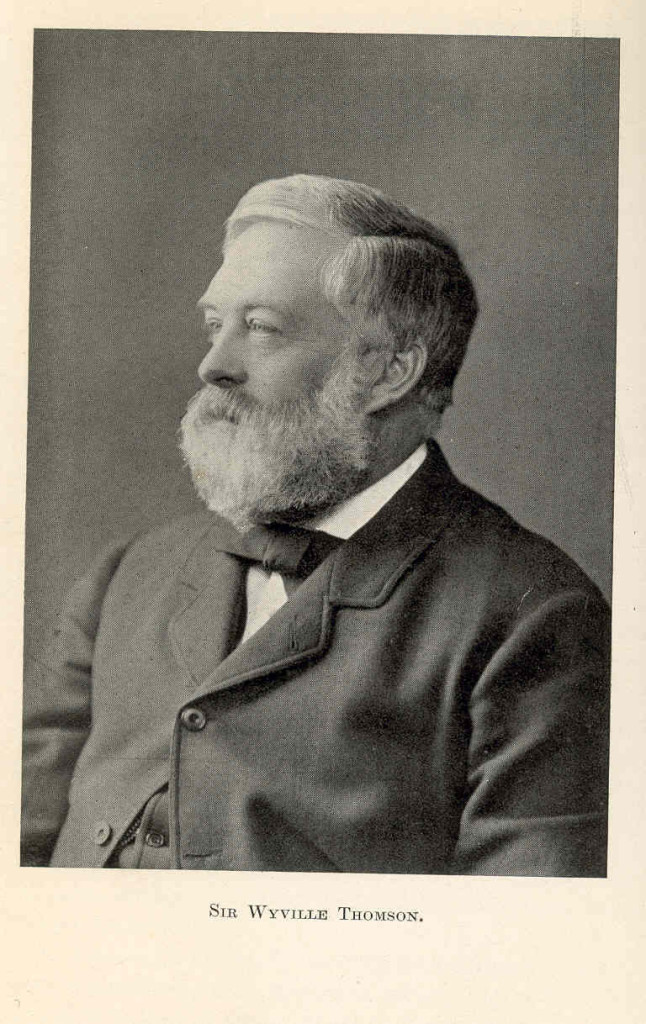 On March 5, 1830, Scottish natural historian and marine zoologist Charles Wyville Thomson was born. Thomson served as the chief scientist on the famous Challenger expedition surveying and exploring the oceans for more than 130.000 km between 1872 and 1876. Thomson‘s work there revolutionized oceanography.

Thomson was born at Bonsyde, in Linlithgow, West Lothian, the son of Andrew Thomson, a surgeon in the service of the East India Company. He was educated under Charles Chalmers at Merchiston Castle School, then from 1845 studied medicine at the University of Edinburgh, where he graduated as MD. However, he was forced to give up medical science after three years because of ill health and his focus turned towards natural science, zoology, and botany. He joined the Botanical Society of Edinburgh in 1847, and soon after became secretary to the Royal Physical Society of Edinburgh. In 1850 he was attending the botany class of famous Scottish botanist John Hutton Balfour at the university and soon after was appointed lecturer of botany, and in 1851 professor of botany, at the University of Aberdeen.

Animals of the Depth

In 1853 he became a professor of natural history in Queen’s College, Cork, Ireland. A year later he was nominated to the chair of mineralogy and geology at the Queen’s University of Belfast, and in 1860 was transferred to the chair of natural history at the same institution. While at Belfast, Thomson began to establish himself as a marine biologist with his published studies of coelenterates, polyzoans and fossilized cirripeds, trilobites, and crinoids. He also became interested in determining whether life exists at great depths in the sea. In 1847 Manx naturalist Edward Forbes had suggested that below 300 fathoms (a fathom equals ‘6 feet or 1.8288 metres) there exists an azoic zone entirely devoid of life. In 1866, while visiting Norwegian biologist Michael Sars at Christiania (Oslo), Thomson had the opportunity to examine animals collected at depths below 300 fathoms. 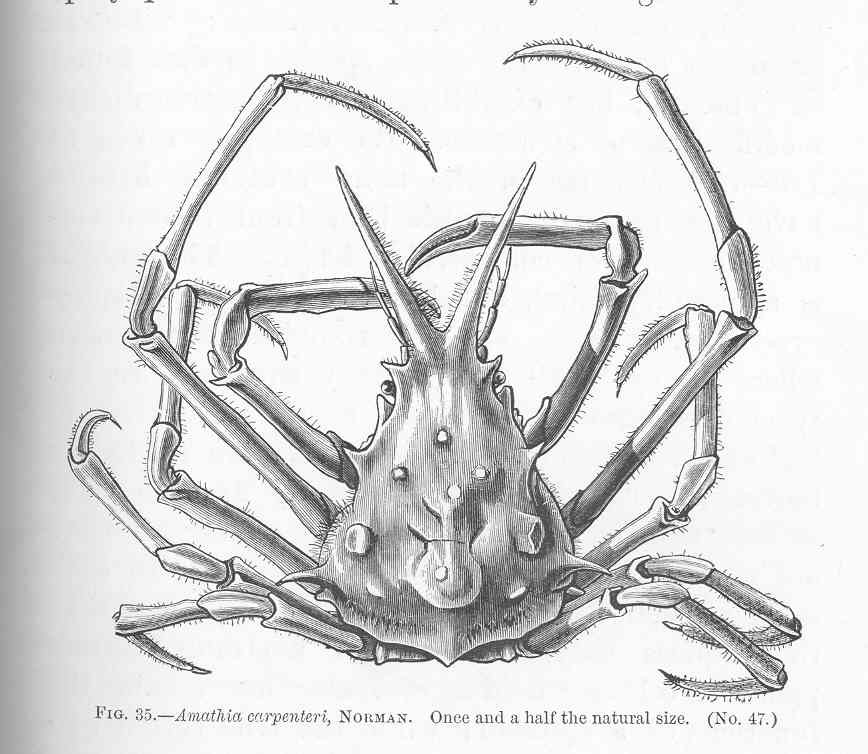 Amathia carpenteri, Norman Subject: Bryozoa, Amathia Tag: Shellfish, from Thomson, C. Wyville (1873) Depths of the Sea : an account of the General Results of the Dredging Cruises of H.M.SS. ‘Porcupine’ and ‘Lightning’ During the Summers of 1868, 1869, and 1870 under the Scientific Direction of Dr. Carpenter, F.R.S., J.Gwyn Jeffreys, F.R.S., and Dr. Wyville Thomson, F. R. S

The Depths of the Sea

Prompted by the results of the dredgings of Michael Sars in the deep sea off the Norwegian coasts, Thomson persuaded the Royal Navy to grant him use of HMS Lightning and HMS Porcupine for deep sea dredging expeditions in the summers of 1868 and 1869. They showed that animal life existed down to depths of 650 fathoms (1200 m), that all marine invertebrate groups are present at this depth, and that deep-sea temperatures are not as constant as had been supposed, but vary considerably, and indicate oceanic circulation. In 1869 Thomson was made a fellow of the Royal Society for his work. He described the details and accomplishments of the two expeditions in his popular study The Depths of the Sea (1873).[3]

The Plan of a Global Expedition

In 1868 Thomson assumed the duties of professor of botany at the Royal College of Science, Dublin, and finally in 1870 he received the natural history chair at the University of Edinburgh. The remarkable hydrographic and zoological results which Wyville Thomson had demonstrated, in addition to the growing demands of ocean telegraphy, soon led to the Royal Navy to grant use of HMS Challenger, a steam-powered corvette of 2,300 tons, for a global expedition. Wyville Thomson was selected as chief scientist, and the ship left port on 23 December 1872.

The Challenger began the arduous tasks of sounding, dredging, and taking serial temperatures and water samples. Their dredging confirmed that marine life exists at depths approaching 3,000 fathoms. They also discovered nodules of almost pure manganese peroxide on the seafloor. As they dredged and sounded in deeper water, they discovered that a clay bottom is characteristic of great depths. The material of the ocean floor is the residue of a chemical process that removes the carbonate of lime from the calcareous skeletons of foraminifers, mollusks, and other species. In bottom deposits beyond four thousand fathoms in the Pacific Ocean, they discovered a seafloor with new characteristics–radiolarian ooze.[3] On 24 May 1876 the ship returned to her berth at Sheerness after a voyage of 68,890 nautical miles and after having made soundings at 362 stations. 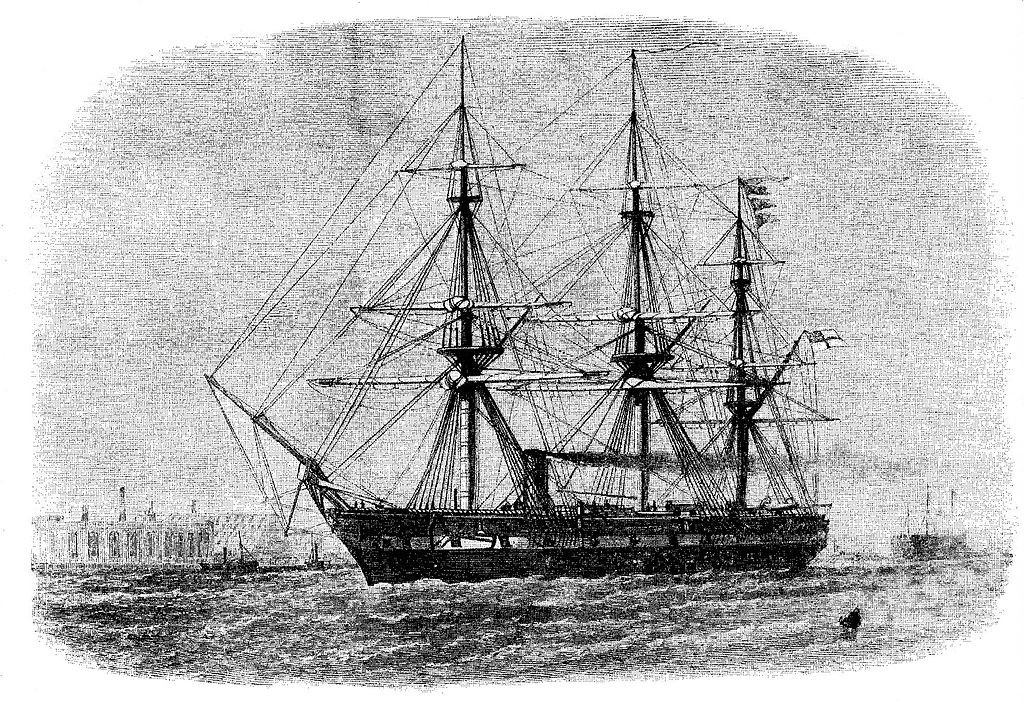 The HMS Challenger, from The Report of the Scientific Results of the Exploring Voyage of HMS Challenger during the years 1873–1876

The Challenger Expedition was deemed a great success, and on his return Wyville Thomson received a number of academic honors, as well as a knighthood. In 1880 he published two volumes The Voyage of the Challenger in the Atlantic, a preliminary account of the results of the voyage. He spent the next years working on the publication of the full monograph of the voyage. Wyville Thomson had a highly strung mentality, and his health was generally poor throughout his life. He found dealing with publishers over the requirements of publishing 50 volumes of detailed illustration and scientific description enormously stressful and resigned this work in 1881 due to bad health shortly before his death in 1882. The publishing was finally completed by his friend and colleague Sir John Murray.[1]

John James Wild, The Pioneering Voyage of the HMS Challenger, [9]