You are here: Home › astronomy › John Dee and his World of Science and Magic 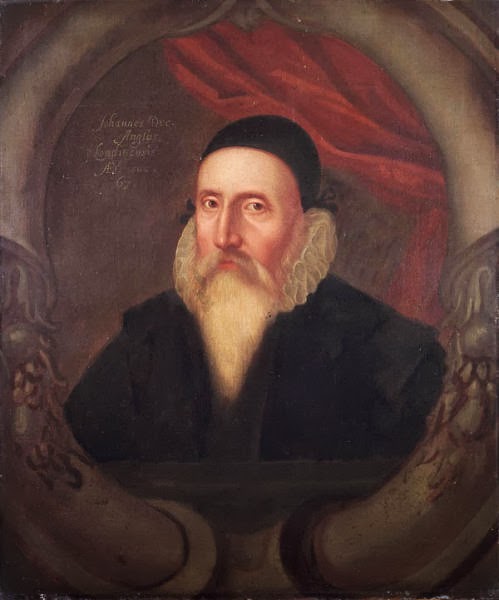 On July 13, 1527, Welsh mathematician, astronomer, astrologer, occultist, navigator, imperialist and consultant to Queen Elizabeth I, John Dee was born. He is considered one of the most learned men of his age. Besides being an ardent promoter of mathematics and a respected astronomer, in his later years he immersed himself in the worlds of magic, astrology and Hermetic philosophy. One of his aims was attempting to commune with angels in order to learn the universal language of creation.

“It is by the straight line and the circle that the first and most simple example and representation of all things may be demonstrated, whether such things be either non-existent or merely hidden under Nature’s veils.”
– John Dee, Monas Hieroglyphica (1564)

John Dee was born in 1527 in Tower Ward (City of London) as the son of the wealthy Rowland Dee of old nobility. Dee attended the Chelmsford Chantry School and from 1542 the St John’s College in Cambridge. In 1545 he received the Bachelor of Arts. In May 1547 he travelled to the Netherlands to study with the mathematician and astronomer Gemma Frisius [5] and his pupil, the cartographer Gerhard Mercator.[4] Equipped with Mercator’s astronomical instruments, which he acquired for Trinity College, Dee returned to Cambridge a few months later. The acquisition of such equipment and maps was of great importance for England’s role as an emerging colonial power in competition with Portugal and Spain. In 1548 Dee was appointed Master of Arts. He left Cambridge again and stayed in France and Leuven. During this time he also studied alchemy and the then branch of science magia naturalis and acquired an excellent scientific reputation, which gave him access to the highest circles.1550 Dee travelled to Paris, 1552 he met Gerolamo Cardano in London.[6] During their acquaintance they worked on a perpetual motion machine and examined a gemstone that was said to have magical properties. Dee gave lectures in Paris on Euclid.

In 1554 Dee was offered a chair at Oxford in mathematics, which he rejected because he felt that English universities were too rhetorically and grammatically oriented – these two subjects, together with logic, formed the academic trivium – while philosophy and science, the more advanced quadrivium, which included arithmetic, geometry, music and astronomy, were neglected. Dee presented Queen Mary I with a visionary plan for the preservation of old books, manuscripts and records and proposed the establishment of a national library in 1556, but his plan was not supported. Instead he built up a private library in his house in Mortlake, constantly buying books from England and the European continent. Thus his library with about 4000 volumes became the largest collection in England of his time and attracted many scholars. In around 1555, he was charged with having made the horoscopes of Queen Mary and Queen Elisabeth I. As an expansion of the case, Queen Mary was charged with treason. Dee was sent to a religious examination at Bishop Bonner’s, becoming one of his closest associates.

Elizabeth I and Dee’s Monas Hieroglyphica

Elisabeth I took the throne shortly after and announced John Dee as one of her advisors in astronomy, astrology and other scientific matters. However, he never received an employment that secured him financial independence. From then on, Dee was occupied with numerous official tasks like navigation assistances and still managed to complete own works like Monas Hieroglyphica, his very successful Cabalistic interpretation of a glyph, which was highly admired by contemporary academics. His most read and best known work was published around 1570. It described the importance of mathematics in several other sciences as well as art. Its success is also caused by the writing style, designed for readers outside universities. 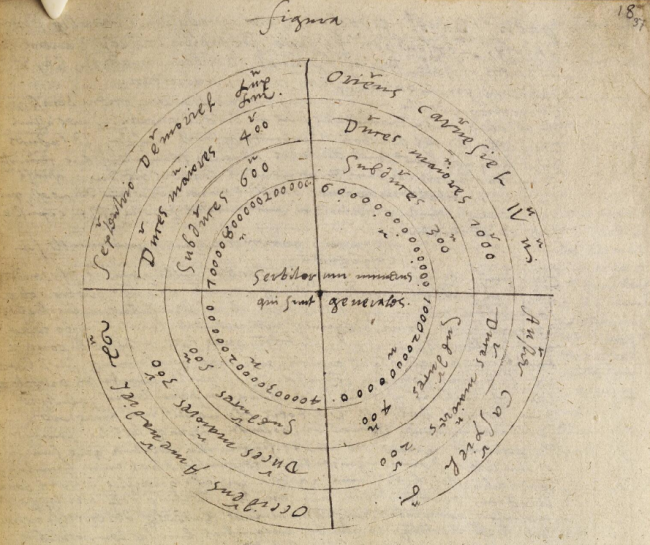 Changing his View of Science

In 1570 he published a mathematical preface to Henry Billingsley’s English translation of Euclid’s Elements,[8] in which he emphasised the central importance of mathematics and its influence on the other arts and sciences. Although intended for the uneducated reader, it proved to be Dee’s most influential work and was reprinted frequently. Through the years, John Dee changed his views on science and his personal progress. In the early 1580s, Dee became increasingly dissatisfied as he made little progress in learning the secrets of nature, his plans for expeditions into North America failed, and his influence at court waned. He started to contact the supernatural using a crystal-gazer as a communication device. Soon, he began organizing spiritual conferences, influencing and impressing those he met. As his book collection (whose catalogue is known) proves, Dee had more than a casual interest in angels. He was very interested in Angelology and especially in the communication with angels; so he collected all written conversations between humans and angels. He studied the similarities of the angelic conversations with various texts, among others by Ficino, Agrippa von Nettesheim and Johannes Trithemius, as well as the widespread biblical apocrypha and pseudepigraphy.

Dee was able to write several books considering his new occupation and received many invitations by high ranked politicians. After six years of absence, which he lived as a nomad in Europe, Dee came back to see that his instruments and his impressive library were destroyed. When Elizabeth passed away, James I became her successor and found no reason to support Dee anymore, since he did not believe in anything supernatural. However, when Dee turned to him in 1604 for help with the charges brought against him, he promptly rejected him. So he spent his last years in poverty and died in late 1608 or early 1609 in Mortlake. Both the death register and Dee’s tombstone have been lost.

John Dee was an extraordinary thinker, believing in numbers delivering the real truth. After his death, many manuscripts and unpublished books were found and made public later on. He highly promoted mathematics to those not attending universities, which was often appreciated by the craftsmen and technical artists. In general, John Dee’s fans came from all parts of society, most politicians enjoyed his theories and advices, academics like his friend Tycho Brahe favored his scientific efforts, and the working class liked the way he transferred high knowledge to their uses and understandings.[7]