You are here: Home › physics › Gustav Hertz and the Franck-Hertz Experiment 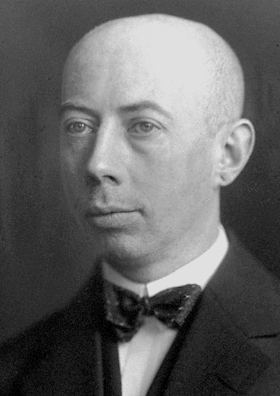 On October 30, 1975, German experimental physicist and Nobel Prize winner Gustav Ludwig Hertz passed away. A nephew of Heinrich Rudolf Hertz, he received the Nobel Prize for Physics in 1925 together with James Franck for the Franck-Hertz experiment, which confirmed the quantum theory that energy can be absorbed by an atom only in definite amounts and provided an important confirmation of the Bohr atomic model.

Gustav Hertz was born in Hamburg, the son of Gustav Theodor Hertz, a lawyer and brother of famous physicist Heinrich Rudolf Hertz. He attended the Gelehrtenschule des Johanneums before studying at the Georg-August University of Göttingen (1906–1907), the Ludwig Maximilians University of Munich (1907–1908), and the Humboldt University of Berlin (1908–1911). As was the custom with German students at this time, Hertz did not complete his studies at a single university, but moved around to sample the best of a number of institutions.[3] He received his doctorate in 1911 under Heinrich Leopold Rubens for his thesis Über das ultrarote Absorptionsspektrum der Kohlensäure in seiner Abhängigkeit von Druck und Partialdruck with Max Planck as his second advisor [3,4]. Hertz’s early researches, for his thesis, involved studies on the infrared absorption of carbon dioxide in relation to pressure and partial pressure. He was appointed Research Assistant to Rubens at the Physics Institute of Berlin University in 1913 but, with the onset of World War I, he was mobilized in 1914 and severely wounded in action in 1915.

Together with James Franck he began his studies on electron impact in 1913 and before his mobilization, he spent much patient work on the study and measurement of ionization potentials in various gases, later known as the Franck–Hertz experiments. Their experiments showed that when an electron strikes an atom of mercury vapour, the electron must possess a certain energy (4.9 electronvolts [eV], in this case) in order for that energy to be absorbed by the atom. Hertz and Franck eventually realized that the 4.9 eV exactly corresponded to the energy level needed for an electron within the mercury atom to make an abrupt transition to a higher energy level. This demonstrated that atoms absorb energy in precise and definite amounts, or quanta. The demonstration that the inner structure of the atom is quantized had been foreseen by Niels Bohr, who utilized the quantum theory to explain the nature of the atom.[1,2]

In 1917, Hertz returned to the University of Berlin as a Privatdozent. In 1920, he took a job as a research physicist at the Philips Incandescent Lamp Factory in Eindhoven, which he held until 1925, when he obtained the position as ordinarius professor and director of the Physics Institute of the Martin Luther University of Halle-Wittenberg. After receiving the Nobel Prize in Physics in 1925, Hertz was appointed to the Charlottenburg University of Technology in 1927, where he became professor of physics and director of the newly established Physical Institute.While there, he developed an isotope separation technique via gaseous diffusion. In 1931 he was elected a corresponding member of the Göttingen Academy of Sciences.

Since Hertz was an officer during World War I, he was temporarily protected from National Socialist policies and the Law for the Restoration of the Professional Civil Service, but eventually the policies and laws became more stringent, and at the end of 1934, he was forced to resign his position at THB, as he was classified as a “second degree part-Jew” since his paternal grandfather Gustav Ferdinand Hertz was a converter from Jewish faith to Lutheranism. He then took a position at Siemens, as director of Research Laboratory II. While there, he continued his work on atomic physics and ultrasound, but he eventually discontinued his work on isotope separation. He held this position until he departed for the Soviet Union in 1945

Taken to the Soviet Union

Hertz was concerned for his safety and, like his fellow Nobel laureate Franck, was looking to move to the USA or any other place outside Germany. So he made a pact with three colleagues: Manfred von Ardenne, director of his private laboratory Forschungslaboratorium für Elektronenphysik, Peter Adolf Thiessen, ordinarius professor at the Humboldt University of Berlin and director of the Kaiser-Wilhelm Institut für physikalische Chemie und Elektrochemie (KWIPC) in Berlin-Dahlem, and Max Volmer, ordinarius professor and director of the Physical Chemistry Institute at the THB. The pact was a pledge that whoever first made contact with the Russians would speak for the rest to prevent plunder of their institutes, to continue their work with minimal interruption, and to protect themselves from prosecution for any political acts of the past. Before the end of World War II, Thiessen, a member of the Nazi Party, had Communist contacts. All four of the pact members were taken to the Soviet Union. Hertz was made head of Institute G, in Agudseri (Agudzery), about 10 km southeast of Sukhumi and a suburb of Gul’rips.

In 1949, six German scientists, including Hertz, Thiessen, and Barwich were called in for consultation at Sverdlovsk-44, which was responsible for uranium enrichment. The plant, smaller than the American Oak Ridge gaseous diffusion plant, was getting only a little over half of the expected 90% or higher enrichment. After 1950, Hertz moved to Moscow. In 1951, Hertz was awarded a Stalin Prize, second class. Hertz remained in the Soviet Union until 1955. He was allowed to move back to the German Democratic Republic to become ordinarius professor at the University of Leipzig. He held this position until he retired in 1961. After he retired he continued to live for a while in Leipzig, but then moved to Berlin where he spent the last years of his life. In 1975 he died in Berlin as the only Nobel Prize winner ever to have been scientifically active in the GDR after the award ceremony.