You are here: Home › literature › The Fantastic and Visionary Worlds of Leo Perutz 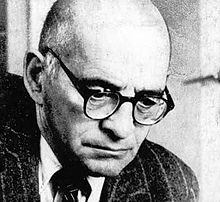 On November 2, 1882, Austrian novelist and mathematician Leo Perutz was born. Perutz was a mathematician who formulated an algebraic equation which is named after him and worked as a statistician for an insurance company. He is best known as author of fantasy novels, which gained the admiration of Jorge Luis Borges, Italo Calvino, Ian Fleming, Karl Edward Wagner and Graham Greene.

Leo Perutz was born in Prague, the oldest among four siblings, to a largely non-religious family of Jewish-Spanish ancestry to Benedikt Perutz, a successful textile businessman, and his wife Emilie. Perutz attended various schools in Prague and Krumau, but he was not a very good student and failed to pass his high school exam (Matura). The family then moved to Vienna, where Perutz attended the k.k. Erzherzog-Rainer-Gymnasium, which he left in 1902 without a degree and subsequently worked in his father’s business. From 1903 to 1904 he attended military service and left the army with the rank of a corporal. In 1905, Perutz attended lectures in mathematics and economics at the philosophical faculty of the University of Vienna without a valid highschool diploma. He change to Technical University of Vienna studying probability theory, statistics, actuarial science, and economics. Though formally not possible, Perutz seemed to have made a degree in actuarial theory.

Also in 1906, Perutz published his first short story, a novella in the Sunday newspaper “Der Weg“. In 1907, he accepted a job as actuary at the Assicurazioni Generali in Triest, the company for which also famous author Franz Kafka was working. Besides his work as actuary, he published reviews and short stories. In October 1908 he returned to Vienna working for the insurance company Anker. As an actuary he had to work on mortality tables and related insurance rates, a topic for which he also published in scientific journals. His eponymous formula “Perutzsche Ausgleichsformel” was in use over decades within insurance companies. Perutz’ interest in mathematics should also be reflected in his literary writings.

In 1915 he published his first novel, Die dritte Kugel, in which the old legend that the last of three bullets would kill turns out to be true. Later that year, Perutz enlisted in the army. A chest wound cut short his active duty in 1916, and he served out his assignment writing war reports from the military press headquarters in Vienna. Perutz wrote prolifically during the next two decades, producing more than a dozen novels.[1]

Perutz’ novels are short and are usually historical novels combining fast-paced adventure with a metaphysical twist. They are influenced by the work of E. T. A. Hoffmann, Arthur Schnitzler and Victor Hugo (whose work Perutz translated into German).[5] Austrian fellow novelist Friedrich Torberg once characterized Perutz’ literary style as the possible result of a little infidelity of Franz Kafka and Agatha Christie. The Marquis of Bolibar features the Wandering Jew appearing during Napoleon’s campaign in Spain. By Night Under the Stone Bridge is an episodic work whose separate stories are bound together by the illicit love shared, in their dreams, by a Jewish woman and the Emperor Rudolf II.

Ahead of his Time

In the posthumously-published Leonardo’s Judas, da Vinci’s quest for an appropriate face to give the betrayer in his Last Supper is interwoven with the squabble between an usurer and the merchant to whom he owes money. The title of his 1933 novel Saint Peter’s Snow (also known in English as The Virgin’s Brand), which is set in what was then the present day, refers to a drug which induces religious fervour. The Nazis, understandably, did not care for it. Critic Alan Piper considered it “a psychological detective story”, although it has varyingly been categorised as science fiction or fantasy. Piper believed that the novel was decades ahead of its time due to the description of a hallucinogenic drug derived from an ergot fungus 10 years before the discovery of LSD. He also thought it astonishing that it discussed the experimental use of this hallucinogen on an isolated village 20 years before the 1951 Pont-Saint-Esprit mass poisoning, and proposed that ergot was the psychoactive ingredient used in the ancient mystery cults 40 years before this was put forward as a serious proposal.

The Master of the Day of Judgement is a decidedly different mystery story about the circumstances surrounding an actor’s death in the early twentieth century, and Little Apple concerns a First World War soldier’s obsessive quest for revenge. In his discussion of German language fantastic literature, critic Franz Rottensteiner describes Perutz as “undoubtedly the finest fantasy author of his time“. Others, including Argentinian writer Jorge Luis Borges, laud Perutz’s compositional style. The Austrian novelist Robert Musil, in recognition of Perutz’s detailed and historically accurate narratives, credited him with developing a new genre that Musil termed “journalistic fiction.”

In 1938, upon Hitler’s annexation of Austria to Germany, Perutz fled with other Jews to Tel Aviv, Palestine. The difficulties of writing in exile and his isolation from German-language readers severely affected Perutz’s literary output and reduced his reading audience. Perutz was much less sympathetic to Zionism, and hated the heat of Tel Aviv; he took to going with his family to Jerusalem in the summer months. He thought of returning to Europe after 1945.[4]