You are here: Home › history › Gunfight at the O.K. Corral – The Most Famous Gunfight of the Old Wild West 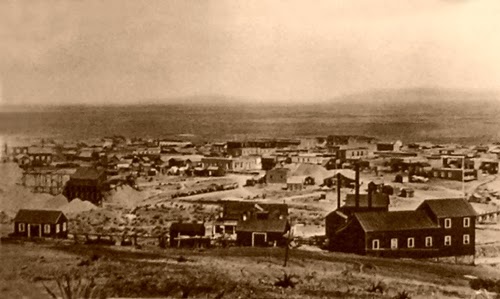 The city of Tombstone in 1881, where the O.K. Corral gunfight took place

At about 3:00 p.m. on Wednesday, October 26, 1881, in Tombstone, Arizona Territory, the most famous gunfight in the history of the American Old West took place. The gunfight, believed to have lasted only about thirty seconds, was fought between the outlaw Cowboys Billy Claiborne, Ike and Billy Clanton, and Tom and Frank McLaury, and the opposing town Marshal Virgil Earp and his brothers Assistant Town Marshal Morgan and temporary lawman Wyatt, aided by Doc Holliday designated as a temporary marshal by Virgil.

The brothers James, Virgil and Wyatt Earp arrived in Tombstone with their wives on December 1, 1879. Virgil Earp had been appointed Deputy U.S. Marshal for East Pima County shortly before his arrival in Tombstone. In June 1881, he also assumed the office of Marshal. Although the Earps were not very popular, they were respected because they protected the interests of city shopkeepers and residents. The fact that Wyatt Earp had prevented Curly Bill Brocius from being lynched when he accidentally killed Marshal Fred White was less to the city dwellers’ liking. The Earps had clashed with Frank McLaury, Tom McLaury, Billy Clanton, Ike Clanton, Johnny Ringo, “Curly Bill” Brocius and others because they belonged to an extensive community of cattle smugglers and horse thieves involved in various criminal activities. Ike Clanton was also known as a drunkard and had often threatened the Earps. Virgil Earp was convinced that the cowboys had vowed to kill him and his brothers. The day the shooting was supposed to take place, Virgil was Deputy Marshal. He had appointed his brothers Wyatt and Morgan as deputy law enforcement officers and had also given police rights to his friend Doc Holliday. Silver had been found in the Tombstone area, which brought an enormous boom to the city. From its foundation in March 1879 to 1881, the population had risen from about 100 to over 7000, not counting Chinese, Mexicans, children and women. The economy flourished; besides two banks and three newspapers there were about 110 saloons, 14 gambling houses and various brothels as well as some mines. The carrying of weapons was forbidden in Tombstone since April 1881. Knives, dirks, pistols and rifles had to be deposited in the stable or saloon when entering the city. The cowboys didn’t obey this law, so Virgil asked them to do something about it, which led to the shooting. The Earps were also aware that the Clantons were involved in a raid on 15 Mexicans in Skeleton Canyon.

The night before the shooting, Wyatt had sent Doc Holiday to bed because he had had a heated discussion with Ike Clanton and had drunk plenty of alcohol. Virgil, on the other hand, played cards all night long with Ike Clanton, Tom McLaury, Johnny Behan and an unknown fifth man.[4] Clanton in particular also got drunk. Towards morning, the round broke up and Behan and Virgil went to bed. McLaury and Clanton had not rented a room and therefore no accommodation. Ike refused to go to sleep despite a request from bartender E. F. Boyle, but threatened instead, according to Boyle’s later statement, with the words “as soon as the Earps show up on the street today, bullets will hail“. Later, Ike picked up the weapons he had left in the stable, entered the city again against the law, and continued to drink as he stalked the Earps. At about 1 p.m. he surprisingly ran into Virgil and Morgan Earp’s hands, who disarmed him and brought him to the judge. While waiting for the judge, Wyatt and Clanton again insulted each other. Ike was sentenced to a fine of $25 plus court costs and released without weapons. Virtually at the same time, McLaury was caught with a gun and knocked down by Wyatt. But he was not allowed to search him legally, because Wyatt was not on duty. During the afternoon the cowboys Billy Clanton and Frank McLaury arrived in the city, because they had heard that there had been trouble with the law enforcement officers. They also did not surrender their weapons as prescribed when entering the city, but bought additional ammunition. Ike also wanted to buy a gun, but because he wore a bandage around his head and was still drunk, the seller refused to give him one. Johnny Behan, Sheriff of Cochise County, attempted to disarm the cowboys to prevent the imminent confrontation. Clanton and Tom claimed to be unarmed, but Frank refused to surrender his weapons unless the Earps were disarmed beforehand. Meanwhile, Virgil decided to disarm the cowboys after talks with various citizens, together with Holliday, Wyatt and Morgan. On the way, they met Behan, whose testimony Virgil interpreted as having already disarmed the cowboys. So Virgil didn’t expect a fight any more. They met the cowboys in the open space near the stable known as O. K. Corral. 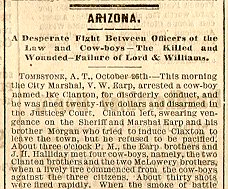 Newspaper article from 1881, pertaining to the Gunfight at the O.K. Corral

When the group of law enforcement officers met the cowboys on the afternoon of 26 October 1881, Virgil is said to have immediately urged them to raise their hands and lay down their arms. He himself had left his gun stuck. Frank McLaury and Billy Clanton instead pulled out their revolvers and cocked them. Virgil screamed that he didn’t want to fight. The witnesses disagree about who started the shooting, the statements in the later processing were contradictory. In addition, the opponents were only a few meters apart, and the black powder used in the cartridges further increased the confusion. What is certain is that about 30 shots were fired in about 30 seconds. The first two shots were probably fired by Wyatt Earp and Billy Clanton. Clanton aimed at Wyatt, but he decided to shoot Frank first, because he was considered a better shooter. Wyatt hit Frank in the stomach, but Billy missed his target. According to witnesses, Holliday then shot down Tom McLaury, who was hiding behind a horse, with a shotgun. Later investigations suggest that Tom was actually unarmed during the fight. At the same time, Frank and Billy in particular were covered with bullets. Ike Clanton, on the other hand, fled and remained unharmed. Billy Clanton and Frank McLaury continued the shooting even though they had been wounded. Morgan and Virgil were also wounded. In the end, however, Frank lay dead on the roadside, Billy and Tom succumbed to their injuries a short time later.

The men’s funerals were well attended, even though the overall public reaction was mostly favorable to the Earps. Later on, rumors started circulating that some of the cowboys were unarmed, wherefore some people switched to the cowboy side.

The event became one of the most important in American history. It displays the back then common image of the cowboys and was kept in mind as a symbolic act between cowboys and lawmen. Modern media had re-enacted the gunfight numerous times in movies, historical shows and scientific sows attempting to clear off the puzzle.