You are here: Home › art › Pablo Picasso – A Giant in Art 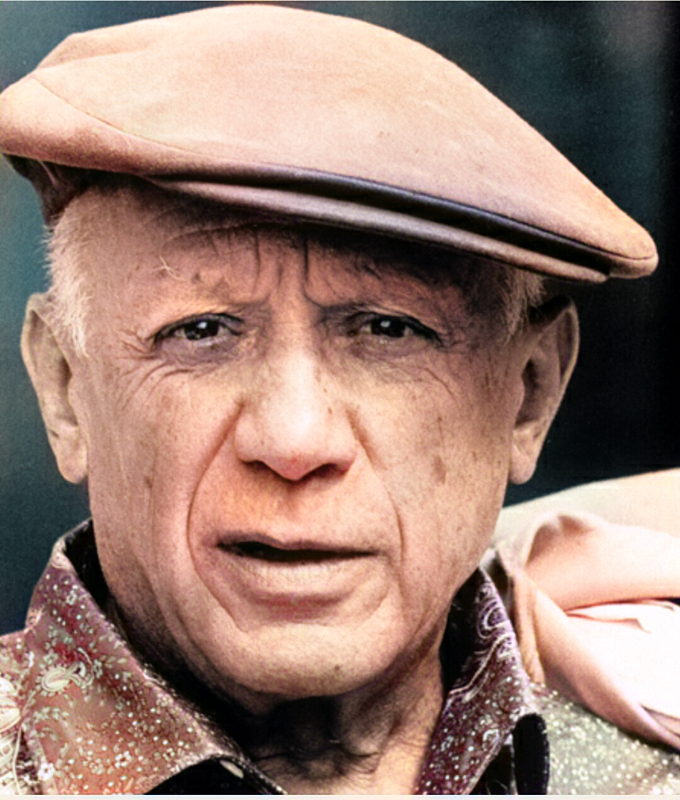 On October 25, 1881, famous Spanish artist Pablo Picasso, painter, sculptor, printmaker, ceramicist, and stage designer was born. He is considered as one of the greatest and most influential artists of the 20th century and is widely known for co-founding the Cubist movement, the invention of constructed sculpture, the co-invention of collage, and for the wide variety of styles that he helped develop and explore.

“Cubism is no different from any other school of painting. The same principles and the same elements are common to all. The fact that for a long time cubism has not been understood and that even today there are people who cannot see anything in it, means nothing. I do not read English, and an English book is a blank to me. This does not mean that the English language does not exist, and why should I blame anyone but myself if I cannot understand what I know nothing about?”
– “Picasso Speaks” (1923)

The Youth of an Artist

Pablo Ruiz Picasso was the first child of José Ruiz Blasco (1838-1913) and María Picasso y López (1855-1938). His father was a freelance painter and teacher at the “Escuela de San Telmo”, an arts and crafts school in the tradition of 19th century academic painting, and curator of a small museum. Pablo Picasso’s talent was early detected. At the age of seven he painted his first work on oil ‘Picador‘ showing a matador in the arena.  In 1891 the family moved to A Coruña in Galicia, where Picasso’s father had accepted a position as art teacher at the Instituto da Guarda. Picasso was admitted to the School of Fine Arts there at the age of ten. After the death of his sister Conchita, who died of diphtheria in January 1895, the family moved to Barcelona, where Picasso effortlessly passed the entrance examination to the art academy “La Llotja” at the age of 14 in just one day – his father was offered a position as a teacher there – so that he was allowed to skip the first two classes.

In 1897 Picasso studied for a short time at the prestigious Royal Academy of San Fernando in the capital Madrid, which he left, however, because he did not like the teaching methods there. In his self-portrait of 1897/98, he changed the signature “Ruiz” to “P. Picasso” for the first time – a symbol for the inner detachment from the parental home. In Madrid Picasso visited the museums, above all the Prado – as already on a visit in 1895 – and the artists’ pubs.  In this period he was mainly influenced by Spanish painters of the 17. century. In February 1900, Picasso’s first solo exhibition was shown in the “Els Quatre Gats”, but, critically reviewed, it only led to moderate sales success, which caused him to go on a motivational trip to the capital of art – Paris, where he got in touch with the works of impressionists Edgar Degas [3] and Pierre Bonnard. It was his period of orientation, Picasso deeply admired the Catalan painters as well as painters form the so called Symbolism, he enjoyed English and Austrian paintings.

In January 1901 Picasso returned to Madrid. He received a message that shocked him deeply: his friend Carlos Casagemas had shot himself in Paris on 17 February out of disappointed love for the dancer Germaine Gargallo. Now, the well known blue period began and was characterized by its melancholy and was mainly interpreted as pure sadness even though critics very much enjoyed the new paintings. Very typical for these years is the painting ‘Evocation (The Burial of Casagemas)‘, which is considered the first image of the Blue Period. In the following rose period, the financial success finally set in, the paintings were not as sad and the color blue slowly lost its significance in Picasso’s works.

In 1903 Picasso worked very productively in Barcelona, but returned to Paris, where he lived in Bateau-Lavoir from April 1904 to October 1909. This was a dilapidated house with numerous artists’ studios on Montmartre. The Spanish sculptor Paco Durrio, a friend of Picasso’s, and the painter Kees van Dongen had already found accommodation there. Later Max Jacob and Juan Gris, among others, joined them. He became friends with the poet Guillaume Apollinaire and met Fernande Olivier in 1904, who became his companion and muse from 1905 to 1912. From 1905, pink tones began to dominate Picasso’s works. Thus the painting Boy with a Pipe from 1905 forms the transition from the blue to the pink period. Compared to the Blue Period, there is little melancholy left in the works of this period. The blue moves into the background.

Since the winter of 1906, Picasso had prepared the large painting Les Demoiselles d’Avignon in numerous studies and variations, which he completed in July 1907. With the Demoiselles he laid the foundation for Cubist thought and introduced the period known as “période nègre”. The first reactions to the encounter with the Demoiselles in Picasso’s studio were mostly negative. The picture was largely regarded as immoral and heavily criticized by many, even close friends of Picasso’s. In 1908 the period Picasso is now mainly known for began and lasted for 16 years.  The fist cubism period, the ‘analysic cubism’ was developed by Picasso along with Georges Braque [4] and was characterized through brown and rather neutral colors taking apart certain objects. The synthetic cubism marked the first use of collages and depicted mostly paper cut fragments pasted into different compositions. Overseas, after Picasso’s first exhibition in 1911 in Alfred Stieglitz’s Galerie 291, the new art movement was also represented in the Armory Show, New York, 1913, where works by Braque, Picasso, and Matisse were exhibited.

Picasso spent the time with Eva Gouel in Avignon from late June to mid-November 1914. With the outbreak of the First World War, the situation changed abruptly for many artists. On August 2, 1914, Picasso accompanied Braque and Derain, who had received their order to present the work, to Avignon station. Braque suffered a severe head injury in 1915 and took more than a year to recover from the operation. Her art dealer Kahnweiler, who was German, had to leave France; Picasso, who as a Spaniard did not have to do military service, remained in Paris without his friends.

In 1923 Picasso met the surrealist André Breton. Already in the first issue of the surrealist magazine La Révolution surréaliste of December 1924, a plastic construction of Picasso was reproduced. The long-standing contact with the surrealists, however, was not free of conflict. When Eric Satie’s ballet Les Aventures de Mercure was performed in 1924 with the set and costumes of Picasso, several Surrealists protested against Picasso’s participation and called the event a charity event for the international aristocracy.[41] André Breton, Louis Aragon and other Surrealists who were impressed by Picasso’s ingenuity subsequently published in the Paris Journal an apology declared an Homage à Picasso

The events of the Spanish Civil War deeply shook Picasso, and images were created that recall Goya’s horrors of war in their intensity, especially Guernica, which deals with the horror of the bombing of the Basque city of Guernica by the German Legion Condor on 26 April 1937.  From 1936 the artist worked in a studio in the 7 Rue des Grands-Augustins in Paris, where Guernica was created and which he also used as an apartment from spring 1939. From the beginning of the German occupation in 1940 during the Second World War until the liberation of Paris on 25 August 1944, he lived here without travelling.

“It isn’t up to the painter to define the symbols. Otherwise it would be better if he wrote them out in so many words! The public who look at the picture must interpret the symbols as they understand them.”
– Picasso on “Guernica”

The Ever Changing Artist

Pablo Picasso was a generous artist who always had the need to re-invent himself. He was deeply admired by the famous Salvador Dalí, the author André Breton or Max Ernst who highly appreciated Picasso’s surrealistic works. On April 8, 1973, Picasso died in his home in Mougins as a result of a heart attack caused by pulmonary edema.

At yovisto academic video search, you can enjoy Francoise Gilot’s talk ‘An Encounter with Picasso‘ at the Metropolitan Museum of Art.