You are here: Home › literature › Adventure Time with Emilio Salgari 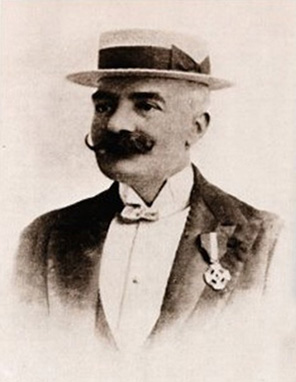 On August 21, 1862, Italian writer of action adventure swashbucklers and a pioneer of science fiction Emilio Salgari was born. For over a century, his novels were mandatory reading for generations of youth eager for exotic adventures. Many of his most popular novels have been adapted as comics, animated series and feature films. He is considered the father of Italian adventure fiction and Italian pop culture, and the “grandfather” of the Spaghetti Western.

“In the summer of 1904, at age five, my mother gave me The Black Corsair and The Pirates of Malaysia, books I still own to this day. So at age five I entered those exotic worlds that Salgari created in his numerous novels. I think I even preferred those stories to the more popular and more sophisticated works of Jules Verne.”
— Jose Luis Borges

Emilio Salgari was born in Verona to Luigi and Luigia Salgari, a family of modest merchants. From a young age, he had a desire to explore the seas and after school, we went to the technical school, and immatriculated in 1878/79 in the nautical school “Paolo Sarpi” in Venice. But his academic performance was too poor, and he never graduated. He began his writing career as a reporter at “La Valigia” in Milano in 1883 followed by the daily “La Nuova Arena” in Verona.

The Birth of a Literary Legend

Salgari made only one sea voyage in his life, a three month journey from Verona to Brindisi aboard a merchant ship. When he came back, he showed his friends various artifacts from his travels in the Far East, artifacts he had purchased from some vendor along the Italian coast. The legend had begun; a legend he would promote and defend for the rest of his life. [2] At “La Nuova Arena” Salgari published his first serialized story La Tigre della Malesia, a tale of love and adventure that saw the birth of his most legendary characters: Sandokan a pirate, known as The Tiger of Malaysia, Marianna, his beloved, and Yanez de Gomera, Sandokan’s loyal friend, a chain‐smoking, unflappable Portuguese adventurer based on himself. It would later be edited and reissued as Le Tigri di Mompracem, translated into numerous languages and become popular worldwide. The deeds of the fictitious Sandokan seem to be loosely based on the exploits of Libau, a Dayak chieftain resisting James Brooke from his hideout at Mount Sandok in Sarawak.[4]

As his powers of narration grew, so did his reputation for having lived a life of adventure. This is something, he shares also with famous German writer of adventure stories, Karl May.[5] Salgari claimed to have explored the Sudan desert, met Buffalo Bill in Nebraska (he had actually met him during his “Wild West Show” tour of Italy in Verona), and sailed the Seven Seas. Likewise did Karl May claim to have lived a life like the heroes in his stories. Salgari’s early biographies were filled with adventurous tales set in the Far East, events which he claimed were the basis for much of his work. Salgari had actually never ventured farther than the Adriatic Sea. 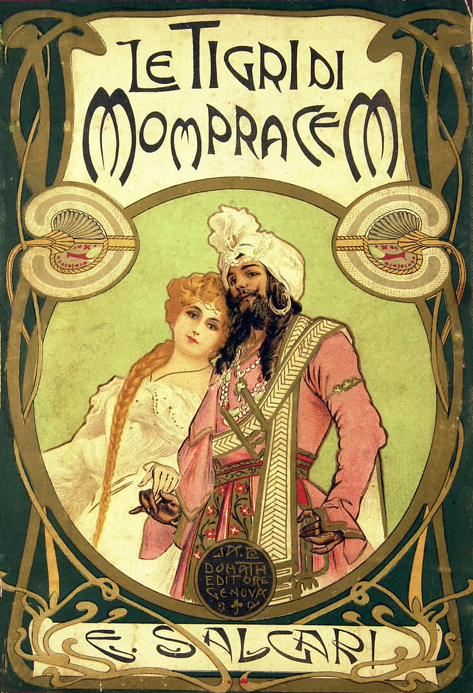 But, millions of readers of all countries have been fascinated by the “stormy nights“, by terrible hurricanes “that shake with violence to the small boats as straws” and by collisions, duels, smoking cannons, deployed ships sails, as well as the chalupas that glide path to the shore, seagulls who plan on water, sailboats that ply stormy seas battling giant waves, bright scimitars and kriss sharp and deadly.[3] He turned his passion for exploration and discovery to writing. His first stories were serialized in newspapers. Early in his career, he began signing his tales as “Captain Salgari”, a title he once defended in a duel when his claim to it was questioned. Though knighted by the Queen of Italy with the title “Cavaliere” and wildly popular, Salgari did not earn much money from his books and lived hand to mouth for most of his life.

Salgari private life was clouded by several tragedies. In 1889 his father committed suicide. His wife Ida became ill after 1903 and Salgari’s struggling increased with her medical bills. These events led Salgari to depression, and he attempted suicide in 1910. Salgari had millions of readers, but he never attained the financial success and stability he deserved. His publishers, taking advantage of his poor business skills, left him almost destitute. After Ida was committed to a mental ward in 1911, Salgari was overwhelmed and took his own life soon afterwards, imitating the Japanese ritual of seppuku, and died on 25 April 1911. In a letter left to his publisher, he wrote

“To you that have grown rich from the sweat of my brow while keeping myself and my family in misery, I ask only that from those profits you find the funds to pay for my funeral. I salute you while I break my pen.  Emilio Salgari”

Salgari wrote more than 200 adventure stories and novels, setting his tales in exotic locations, with heroes from a wide variety of cultures. Though almost unknown to the English-speaking world, his works have been translated into seven languages. Salgari gained inspiration from reading foreign literature and newspapers, travel magazines and encyclopedias, which he used to portray his heroes’ worlds. His tales had been so popular that soon his publisher hired other writers to develop adventure stories under his name. They added 50 novels to his “canon”. Salgari’s style was imitated by many, but no other Italian adventure writer managed to duplicate his popular success. Federico Fellini loved Salgari’s books. Pietro Mascagni had over 50 Salgari titles in his library. Umberto Eco [6] read Salgari’s works as a child.