You are here: Home › mathematics › G. H. Hardy and the aesthetics of Mathematics 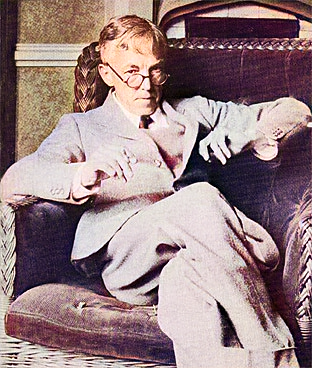 On December 1, 1947, English mathematician G. H. Hardy passed away. Hardy is known for his achievements in number theory and mathematical analysis, but also for his 1940 essay on the aesthetics of mathematics, A Mathematician’s Apology, and for mentoring the brilliant Indian mathematician Srinivasa Ramanujan.

Godfrey Harold Hardy was born on 7 February 1877, in Cranleigh, Surrey, England, the son of Isaac Hardy, a bursar and an art master at Cranleigh school, and his mother Sophia, who had been a senior mistress at Lincoln Training College for teachers. Both parents were mathematically inclined, but, coming from poor families, had not been able to have a university education.[1] Hardy’s own natural affinity for mathematics was perceptible already at an early age. When just two years old, he wrote numbers up to millions, and when taken to church he amused himself by factorising the numbers of the hymns. After schooling at Cranleigh, Hardy was awarded a scholarship to Winchester College for his mathematical work. In 1896 he entered Trinity College, Cambridge. After only two years of preparation, Hardy was fourth in the Mathematics Tripos examination, a result which continued to annoy him for, despite feeling that the system was very silly, he still felt that he should have come out on top.[1] Years later, he sought to abolish the Tripos system, as he felt that it was becoming more an end in itself than a means to an end.

As the most important influence Hardy cites the self-study of Cours d’analyse de l’École Polytechnique by the French mathematician Camille Jordan, through which he became acquainted with the more precise mathematics tradition in continental Europe. In 1900 he passed part II of the tripos and was awarded a fellowship at Cambridge. In 1903 he earned his M.A., which was the highest academic degree at English universities at that time. From 1906 onward he held the position of a lecturer where teaching six hours per week left him time for research.

On the outbreak of World War I, Hardy volunteered for war service but was rejected on medical grounds. In 1919 he left Cambridge to take the Savilian Chair of Geometry at Oxford in the aftermath of the Bertrand Russell affair during World War I.[4] Hardy spent the academic year 1928–1929 at Princeton in an academic exchange with Oswald Veblen,[5] who spent the year at Oxford. Hardy left Oxford and returned to Cambridge in 1931, where he was Sadleirian Professor of Pure Mathematics until 1942. One reason for this was the higher reputation Cambridge enjoyed in mathematics, but also (according to C. P. Snow) that, unlike Oxford, he could continue to live at the college in retirement.

Hardy is credited with reforming British mathematics, introducing the rigorous conceptual clarification and proofs common in continental Europe. British mathematics had previously long drawn only on the reputation of Isaac Newton and was mainly concerned with applied problems. Hardy contrasted this with the tradition of the French cours d’analyse and aggressively advocated a “pure mathematics,” thus setting himself apart from the mathematical physics and applied mathematics (for example, hydrodynamics) practiced at Cambridge. From 1911 Hardy collaborated with John Edensor Littlewood, in extensive work in mathematical analysis and analytic number theory. This (along with much else) led to quantitative progress on the Waring’s problem, as part of the Hardy–Littlewood circle method, as it became known. In prime number theory, they proved results and some notable conditional results. This was a major factor in the development of number theory as a system of conjectures; examples are the first and second Hardy–Littlewood conjectures.

On 16 January 1913, Ramanujan wrote to G. H. Hardy. Coming from an unknown mathematician, the nine pages of mathematics made Hardy initially view Ramanujan’s manuscripts as a possible fraud. Hardy recognized some of Ramanujan’s formulae but others “seemed scarcely possible to believe“. After seeing Ramanujan’s theorems on continued fractions on the last page of the manuscripts, Hardy commented that “they [theorems] defeated me completely; I had never seen anything in the least like them before”. He figured that Ramanujan’s theorems “must be true, because, if they were not true, no one would have the imagination to invent them“. On 8 February 1913, Hardy wrote Ramanujan a letter expressing his interest in his work, adding that it was “essential that I should see proofs of some of your assertions“. In 1914, Ramanujan came to England and spent nearly five years in Cambridge collaborating with Hardy and Littlewood, and published part of his findings there. Hardy and Ramanujan had highly contrasting personalities. Their collaboration was a clash of different cultures, beliefs, and working styles. Hardy was an atheist and an apostle of proof and mathematical rigor, whereas Ramanujan was a deeply religious man who relied very strongly on his intuition.

Curiously, however, a relatively simple consideration in a letter to the editor of Science was enough to make him permanently famous among evolutionary biologists. He formulated this Hardy-Weinberg principle,[7] according to which the relative frequency of alleles in a gene pool remains constant over the generations, independently of Wilhelm Weinberg. Thus, of all people, the despiser of all applied mathematics became the founder of a branch of applied mathematics, population genetics. Apart from the Hardy-Weinberg principle, some of his results from number theory are now said to be used in cryptography.

Hardy preferred his work to be considered pure mathematics, perhaps because of his detestation of war and the military uses to which mathematics had been applied. Hardy deliberately pointed out in his apology that mathematicians generally do not “glory in the uselessness of their work,” but rather – because science can be used for evil as well as good ends – “mathematicians may be justified in rejoicing that there is one science at any rate, and that their own, whose very remoteness from ordinary human activities should keep it gentle and clean.”

Hardy’s book A mathematicians apology was written in 1940. It is one of the most vivid descriptions of how a mathematician thinks and the pleasure of mathematics.

“The mathematician’s pattern’s, like those of the painter’s or the poet’s, must be beautiful, the ideas, like the colours or the words, must fit together in a harmonious way. There is no permanent place in the world for ugly mathematics.”
— G. H. Hardy, in A Mathematician’s Apology (1940, 2012).

One of Hardys quotes from C. P. Snow in the foreword to A Mathematician´s Apology is: “Young men ought to be conceited, but they oughtn’t to be imbecile“.  Hardy referred here to a young man who praises Finnegans Wake by James Joyce as the greatest literary work of all time. Hardy reports similar experiences in an anecdote: One day he was sitting opposite a schoolboy on a train who was reading an elementary algebra schoolbook. Out of courtesy, he asked him after his reading, whereupon he received the condescending answer: “It’s advanced algebra, you won’t understand“. Already in his youth Hardy was an avowed atheist, later he went so far that he refused to enter the university chapel on formal occasions.