You are here: Home › history › The Peace of Westphalia and the End of the Thirty Year’s War 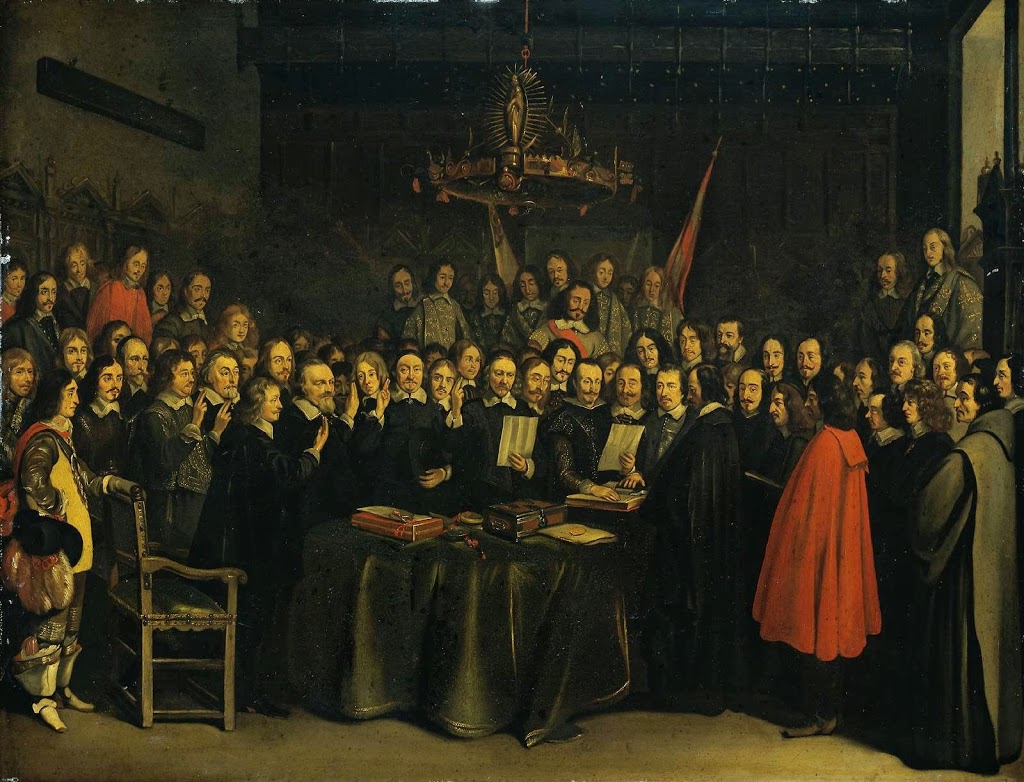 The Ratification of the Treaty of Munster, Painting by Gerard Ter Borch (1648)

“In the name of the most holy and individual Trinity: Be it known to all, and every one whom it may concern, or to whom in any manner it may belong, That for many Years past, Discords and Civil Divisions being stir’d up in the Roman Empire, which increas’d to such a degree, that not only all Germany, but also the neighbouring Kingdoms, and France particularly, have been involv’d in the Disorders of a long and cruel War.” (Preface of the Treaty of Westphalia, 1648)

A Peace of Exhaustion

The Thirty Years War was ended by the Peace of Westphalia which was referred to as the “Peace of Exhaustion” by contemporaries. The Peace of Westphalia was not one specific treaty but rather a collection of treaties commonly linked by the fact that they brought the Thirty Years War to an end. The peace was negotiated, from 1644, in the Westphalian towns of Münster and Osnabrück. The Spanish-Dutch treaty was signed on Jan. 30, 1648. The treaty of Oct. 24, 1648, comprehended the Holy Roman emperor Ferdinand III, the other German princes, France, and Sweden. England, Poland, Muscovy, and Turkey were the only European powers that were not represented at the two assemblies.

The Thirty Years’ War (1618–1648) was a series of wars principally fought in Central Europe, involving most of the countries of Europe, when the Austrian Habsburgs tried to impose Roman Catholicism on their Protestant subjects in Bohemia. There were numerous opponent fractions, such as Protestant against Catholic, the Holy Roman Empire against France, the German princes and princelings against the emperor and each other, and France against the Habsburgs of Spain. The Swedes, the Danes, the Poles, the Russians, the Dutch and the Swiss were all dragged in one after another. But, it wasn’t only a war of religion, also commercial interests and rivalries played a major part as well as power politics.

The names of the commanders involved have become legend. There were the Bohemian nobleman Albrecht von Wallenstein [7] for the Empire and the Count of Tilly for the Catholic League, Marshal Turenne and the Prince de Condé for France, and there was an able Bavarian general curiously named Franz von Mercy. Others to play a part ranged from the Winter King of Bohemia to the emperors Ferdinand II and Ferdinand III, Christian IV of Denmark, Gustavus II Adolphus [8] and Queen Christina of Sweden, the Great Elector of Brandenburg, Philip IV of Spain and his brother the Cardinal-Infante, Louis XIII of France, Cardinals Richelieu and Mazarin and several popes. The Swedish King Gustavus Adolphus was shot in the head and killed at the battle of Lützen in 1632. The increasingly crazed Wallenstein, who grew so sensitive to noise that he had all the dogs, cats and cockerels killed in every town he came to, was murdered by an English captain in 1634. And there seemed to be no end to fighting.

The horror became a way of life…

The war was largely fought on German soil and reduced the country to desolation as hordes of mercenaries, left unpaid by their masters, lived off the land. Rapine, pillage and famine stalked the countryside as armies marched about, plundering towns, villages and farms as they went. So great was the devastation brought about by the war that estimates put the reduction of population in the German states at about 25% to 40%. According to chroniclers the starvation reached such a point in the German Rhineland that there were cases of cannibalism. The horror became a way of life and when the war finally ended, the mercenaries and their womenfolk complained that their livelihood was gone.

Entire, more than entire we have been devastated!
The maddened clarion, the bold invaders’ horde
The mortar thunder-voiced, the blood-annointed sword
Have all men’s sweat and work and store annihilated.
The towers stand in flames, the church is violated
The strong are massacred, a ruin our council board
Our maidens are raped, and where my eyes have scarce explored
Fire, pestilence and death my heart have dominated.
(Poem by Andreas Gryphius, “Tears of the Fatherland, Anno Domini 1636”)[6]

Over a four-year period, the parties (Holy Roman Emperor, France and Sweden) were actively negotiating at Osnabrück and Münster in Westphalia. Finally, the treaties of Westphalia 1648  resulted from this first modern diplomatic congress, thereby initiating a new political order in central Europe, based upon the concept of a sovereign state governed by a sovereign. In the event, the treaties’ regulations became integral to the constitutional law of the Holy Roman Empire. The Peace of Westphalia was a compromise between all parties involved, which became possible because through the total exhaustion of resources and the general war fatigue no side could gain anything by continuing the war. In addition to a revised religious peace, the comprehensive body of rules and regulations also includes far-reaching provisions on the constitutional conditions of the empire, which are intended to strike a balance between the emperor and the estates of the empire. Thus the peace treaty became the most important document of the imperial constitution next to the Golden Bull.[9] Many of the political compromises laid down in it continue to have an effect to this day. Questions left unanswered in the treaty, especially on the subject of troop withdrawal, were clarified in the following months at the Peace Enforcement Congress in Nuremberg.

According to today’s understanding, the Peace of Westphalia is seen as a historical contribution to a European peace order of equal states and as a contribution to the peaceful coexistence of the confessions. The negotiations in Münster, Osnabrück and Nuremberg are at the beginning of a development that has led to the development of modern international law, which is why political science sees here the foundations of the sovereign nation state.