You are here: Home › astronomy › The Galileo Affair 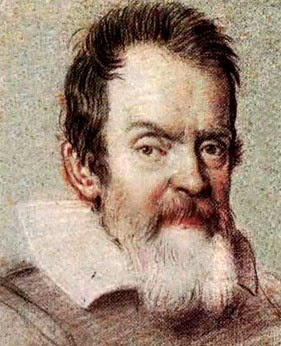 On February 13, 1633, Galileo Galilei arrived in Rome and was brought before the inquisitor Vincenzo Maculani to be charged for his defence of the Copernican theory in his writings. In the course of the trial, Galilei was found guilty and sentenced to house arrest for the rest of his life. All in all, Galileo is a frequent guest in our blog. Besides his life, we have already reported about his astronomical findings. Today, we focus on his controversy with the Roman Catholic church.

“The passage of time has revealed to everyone the truths that I previously set forth; and, together with the truth of the facts, there has come to light the great difference in attitude between those who simply and dispassionately refused to admit the discoveries to be true, and those who combined with their incredulity some reckless passion of their own.”
— Galileo Galilei, Letter to the Grand Duchess Christina of Tuscany (1615)

In fact, the so-called Galileo affair was a sequence of events, beginning already around 1610, and focussed on Galileo’s support of Copernican astronomy. In 1610, Galileo published his Sidereus Nuncius (Starry Messenger), describing the surprising observations that he had made with his new telescope. This included the phases of Venus as well as the Galilean moons of Jupiter. In particular, the phases of Venus, which showed it to circle the sun, and the observation of moons orbiting Jupiter contradicted the geocentric model of Ptolemy, in which the motion of all celestial bodies was centered on the Earth. The problem was that the teachings of Aristotle and Ptolemy were closely associated with the Catholic Church then. He went on to propose a theory of tides in 1616, and of comets in 1619. He argued that the tides were evidence for the motion of the Earth, and promoted the heliocentric theory of Nicolaus Copernicus.[2]

In Defense for Heliocentrism

In the Catholic world prior to Galileo’s conflict with the Church, the majority of educated people subscribed to the Aristotelian geocentric view that the earth was the center of the universe and that all heavenly bodies revolved around the Earth,[8] despite the use of Copernican theories to reform the calendar in 1582. Galileo defended heliocentrism, and claimed it was not contrary to Bible passages that supported the Aristotelian view of the world. He took Augustine‘s position on Scripture: not to take every passage literally, particularly when the scripture in question is a book of poetry and songs, not a book of instructions or history. By 1616 the attacks on the ideas of Copernicus had reached a head, and Galileo went to Rome to try to persuade Catholic Church authorities not to ban Copernicus’ ideas. In the end, a decree of the Congregation of the Index was issued, declaring that the ideas that the Sun stood still and that the Earth moved were “false” and “altogether contrary to Holy Scripture”, and suspending Copernicus‘s De Revolutionibus until it could be corrected.

Pope Urban VIII personally asked Galileo to give arguments for and against heliocentrism in his 1632 published book Dialogue Concerning the Two Chief World Systems, and to be careful not to advocate heliocentrism. Unfortunately, Galileo did not fulfill all requests made by the pope. Whether unknowingly or deliberately, Simplicio, the defender of the Aristotelian Geocentric view in Dialogue Concerning the Two Chief World Systems, was often caught in his own errors and sometimes came across as a fool. Unfortunately for his relationship with the Pope, Galileo put the words of Urban VIII also into the mouth of Simplicio. However, the Pope did not take the suspected public ridicule lightly, nor the Copernican advocacy.

Ordered to Rome for Inquisition

In September 1632, Galileo was ordered to come to Rome to stand trial. In February 1633 he was brought before inquisitor Vincenzo Maculani to be charged. Throughout his trial Galileo steadfastly maintained that he had faithfully kept his promise not to hold any of the condemned opinions, and initially he denied even defending them. However, he was eventually persuaded to admit that, contrary to his true intention, a reader of his Dialogue could well have obtained the impression that it was intended to be a defence of Copernicanism. In view of Galileo’s rather implausible denial that he had ever held Copernican ideas after 1616 or ever intended to defend them in the Dialogue, his final interrogation, in July 1633, concluded with his being threatened with torture if he did not tell the truth, but he maintained his denial despite the threat. 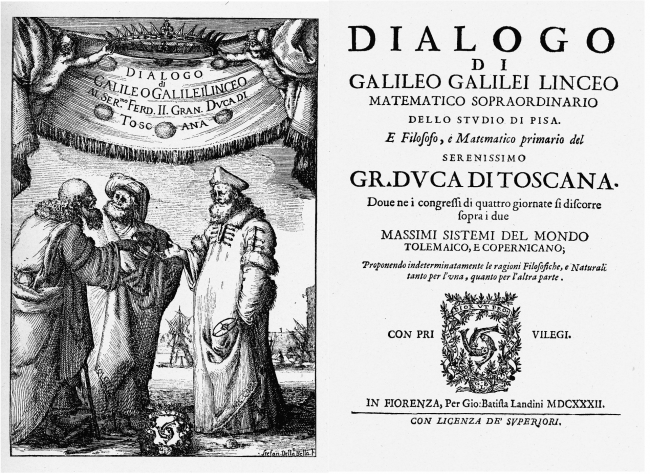 The sentence of the Inquisition was delivered on June 22. Galileo was found “vehemently suspect of heresy”, namely of having held the opinions that the Sun lies motionless at the centre of the universe, that the Earth is not at its centre and moves, and that one may hold and defend an opinion as probable after it has been declared contrary to Holy Scripture. He was required to “abjure, curse and detest” those opinions. He was sentenced to formal imprisonment, which was commuted on the following day to house arrest, which he remained under for the rest of his life. 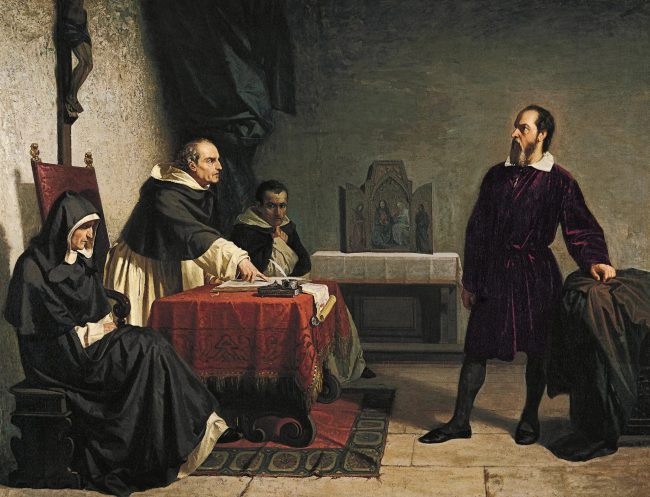 And Yet It Moves…

According to popular legend, after recanting his theory that the Earth moved around the Sun, Galileo allegedly muttered the rebellious phrase And yet it moves, but the only evidence that he ever said this comes from a mid 17th century painting in which the words were hidden until restoration work in 1911. It took until 1992, when Pope John Paul II expressed regret for how the Galileo affair was handled,[8] and issued a declaration acknowledging the errors committed by the Catholic Church tribunal. In December 2008, during events to mark the 400th anniversary of Galileo’s earliest telescopic observations, Pope Benedict XVI finally praised his contributions to astronomy.[9]