You are here: Home › printing › The Gutenberg Bible and the Printing Revolution 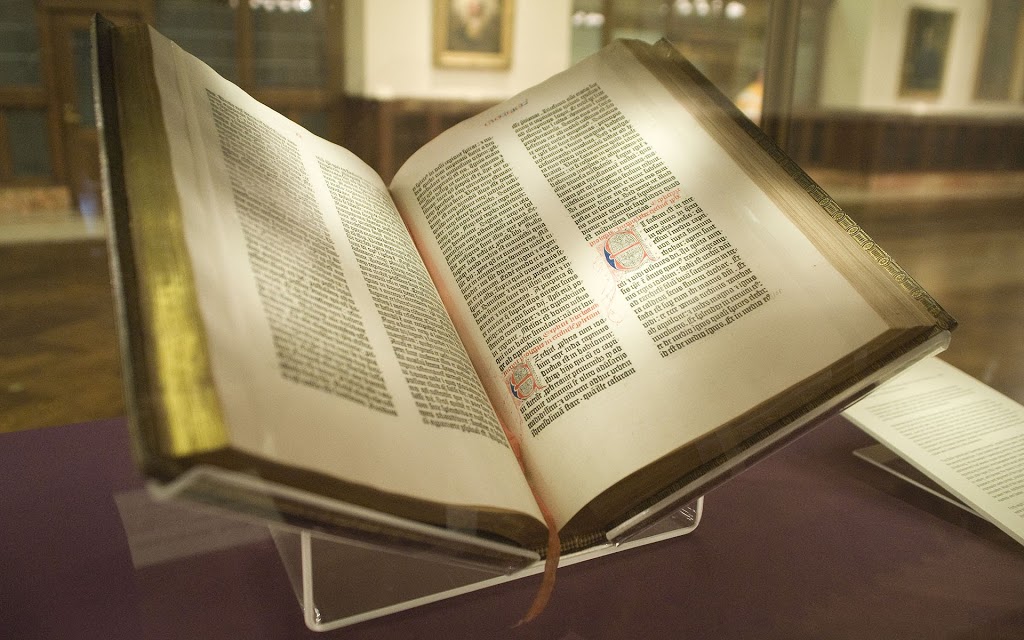 On August 24 (August 15, O.S.), 1456, the printing of the famous Gutenberg Bible was completed.[10] The Gutenberg Bible was the first major book printed with movable type in the West, applying the newly developed technology by Johannes Gutenberg. Widely praised for its high aesthetic and artistic qualities, the book has an iconic status.

The Man of the Millenium

We know that German blacksmith, goldsmith, inventor, printer, and publisher Johannes Gutenberg did not really invent printing. However, he developed a reliable process to reproduce printed documents and books in a great number based on moving letters. Moreover, he also developed the printing press based on the already existing wine press and he invented his own recipe for ink. Gutenberg developed an oil-based ink that would better adhere to his metal type. His ink was primarily carbon, but also had a high metallic content, with copper, lead, and titanium predominating. Readers of this blog are well aware of that fact, because we already dedicated an article on Gutenberg – The Man of the Millenium.[1]

“All that has been written to me about that marvelous man seen at Frankfurt [sic] is true. I have not seen complete Bibles but only a number of quires of various books of the Bible. The script was very neat and legible, not at all difficult to follow—your grace would be able to read it without effort, and indeed without glasses.”
— future pope Pius II in a letter to Cardinal Carvajal, March 1455

While starting only with moderate success, the project which should bring Gutenberg’s technology the breakthrough, was his vision of a large format Latin Bible that should not only be comparable in quality with the existing handwritten and illuminated bibles, but that should even surpass them. Actually, he planned to produce almost 200 copies of his representative bible – an incredible number for the time – 150 copies in cheaper paper print and 35 printed on exquisite parchment. The project simply was gigantic: the bible comprised 1,282 pages of 42 text lines, overall about 3.5 million single letters. The print consists of two volumes in folio format. The first volume contains 648 pages, the second 634 pages.The first volume contains the first part of the Old Testament, the second volume mainly the prophets of the Old Testament and the New Testament. And despite his advanced new technology, he almost needed three years to finish his work. Four to six typesetters were constantly working in parallel to set the printed sheets, twelve printers together with a few assistants worked on the actual printing with six printing presses in parallel. The typesetters were working with 290 different types and per day each type setter finished the layout of a single 2 column page of the bible. Gutenberg’s bible is also referred to as B42, denoting the 42 text lines on each page.

The manuscript of the Vulgate, the translation of the Bible text into Latin, which goes back to Hieronymus and was the standard text of the Latin Bible at the time of Gutenberg, served as a model for the sentence. Gutenberg chose Textura, a variation of the Gothic minuscule, as his font.The name texture refers to the texture of the printed page: straight vertical strokes combined with horizontal lines, giving the impression of a woven structure. It was often used in liturgical books and was characterized by a large font size. This made the Bible text readable even in low light and from a distance and suitable for use in the church. The production of this masterpiece required almost 100,000 printing types, 48,000 sheets of paper with 16 pages each, and for the parchment edition the skins of 3,200 animals. Overall 230,760 work cycles at the printing press had to be operated. At the best, this would require 330 days in total. But, because of the large number of church holidays in these days, the year had only 200 working days. Subsequently to the printing, the mechanically produced volumes had to be manually complemented with artworks from illuminators and rubricators, who carefully decorated the start of the sentences and paragraphs.

A manually compiled bible required approximately three years of work for a skillful writer. But, Gutenberg was able to produce 300 bibles in the very same time. Compared to traditional workers, Gutenberg’s highly skilled and specially trained technicians were rather expensive and also the required raw material did cost a fortune. Gutenberg alone was not able to undergo such a high investment. The paper for the bible had to be imported from Italy, because there was not a sufficient number of paper mills in Germany at that time to produce the required amount. Gutenberg had to cover for the ordered paper more than 600 Gulden. For the parchment another 400 Gulden had to be invested. Thus, Gutenberg had to ask a well-funded investor to support his venture. Johannes Fust, a rich and respectable burgher of Mainz, invested in Gutenberg’s project, but of course Gutenberg had to provide security for the investment – his printing presses and type cases.

Although the bible project was successfully finished in 1454 and despite he was able to sell his masterpiece bibles very well – actually the bibles could be offered with a 75% discount compared to manually crafted bibles – Gutenberg was incapable to pay back his debts, which came about 2,000 Gulden, the equivalent of four stately townhouses. In the following lawsuit, Johannes Fust took over Gutenberg’s print shop. Gutenberg never was able to recover from this blow financially. In 1468, he passed away in his hometown Mainz. He was burried in the St. Francis Church in Mainz that was broken down in the 18th century. Today, his tomb is lost. But, from his originally almost 200 masterpiece bibles, there are still 49 left, distributed all over the world, some of them only in fragments. The last sale of a complete Gutenberg Bible took place in 1978. It fetched $2.2 million. The price of a complete copy today is estimated at $25-35 million. Individual leaves now sell for $20,000–$100,000, depending upon condition and the desirability of the page.

Due to its historical significance and aesthetic quality, the 42-line Bible is considered the most important and valuable book in the history of printing. The Gutenberg Bible had a profound effect on the history of the printed book. Textually, it also had an influence on future editions of the Bible. It provided the model for several later editions, including the 36 Line Bible, Mentelin’s Latin Bible, and the first and third Eggestein Bibles.

‘
Collection in Focus: The Gutenberg Bible, [8]