You are here: Home › chemistry › Theodore William Richards and the Weight of Chemical Elements 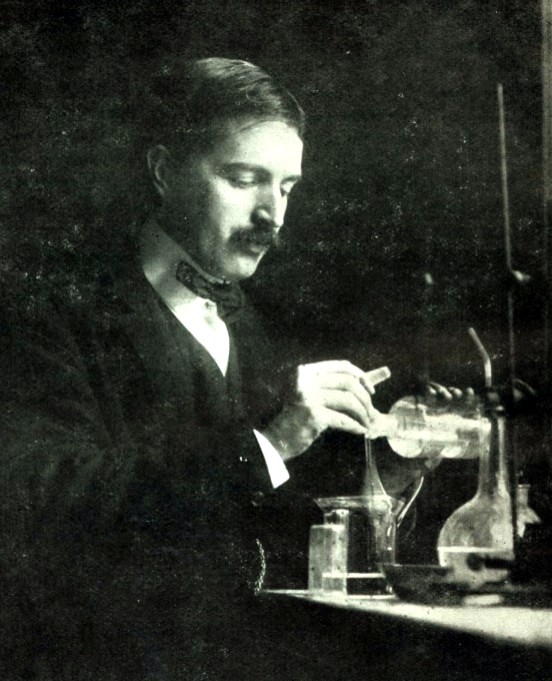 On January 31, 1868, American chemist Theodore William Richards was born. Richards was the first American scientist to receive the Nobel Prize in Chemistry “in recognition of his accurate determinations of the atomic weight of a large number of chemical elements.” His work meticulously refined the classical gravimetric methods of analysis to better reduce the sources of error. Together with his co-workers, he was able to measure accurate values for atomic weight for over 60 elements.

“Every student of science, even if he cannot start his journey where his predecessors left off, can at least travel their beaten track more quickly than they could while they were clearing the way: and so before his race is run, he comes to virgin forest and becomes himself a pioneer.”
– Theodore William Richards, [9]

Theodore Richards was born in Germantown, Philadelphia, Pennsylvania to William Trost Richards, a well-known painter of landscapes and seascapes, and his wife Anna née Matlack, a poet. During his childhood, Richards travelled to England and France and, and received most of his pre-college education from his mother. During one summer’s stay at Newport, Rhode Island, Richards met Professor Josiah Parsons Cooke of Harvard, who showed the young boy Saturn’s rings through a small telescope. Years later Cooke and Richards would work together in Cooke’s laboratory.

At the age of 14, Richards entered Haverford College, Pennsylvania in 1883, earning a Bachelor of Science degree in 1885. He entered Harvard University and received the degrees, B.A. in 1886; M.A. and Ph.D. in 1888 with a thesis on the topic of the determination of the atomic weight of oxygen relative to hydrogen. His doctoral advisor was Josiah Parsons Cooke, whom he had known since childhood.

The following twelve months were spent in Germany where he studied under chemist Victor Meyer, P. Jannasch, G. Kruss and W. Hempel. On his return to Harvard he was appointed Assistant in Chemistry, then instructor, assistant professor, and finally full professor in 1901. In 1903 he became chairman of the Department of Chemistry at Harvard, and in 1912 he was appointed Erving Professor of Chemistry and Director of the new Wolcott Gibbs Memorial Laboratory.

The Atomic Weights of 55 Elements

About half of Richards’ original work has concerned atomic weights, starting in 1886 with work on oxygen and copper. On returning to Harvard in 1889, this was his first line of research, continuing up to his death. He quickly developed a new technique for the determination of halide ratios and did much towards improving methods of weighing. He invented the nephelometer and demonstrated the insidious effect of occluded moisture in gases and solids. According to Forbes, by 1932 the atomic weights of 55 elements had been studied by Richards and his students. Among the potential sources of error Richards uncovered in such determinations was the tendency of certain salts to occlude gases or foreign solutes on precipitation. As an example of the care Richards used in his work, Emsley reports that he carried out 15,000 recrystallizations of thulium bromate in order to obtain the pure element thulium for an atomic weight measurement.

An Element can have Different Atomic Weights

Richards was the first to show, by chemical analysis, that an element could have different atomic weights. He was asked to analyze samples of naturally occurring lead and lead produced by radioactive decay. His measurements showed that the two samples had different atomic weights, supporting the concepts of isotopes. Although Richards’s chemical determinations of atomic weights were highly significant for their time, they have largely been superseded. Modern scientists use electronic instrumentation, such as mass spectrometers, to determine both the masses and the abundances of an element’s isotopes. From this information, an average atomic mass can be calculated, and compared to the values measured by Richards. The modern methods are faster and more sensitive than those on which Richards had to rely, but not necessarily less expensive. 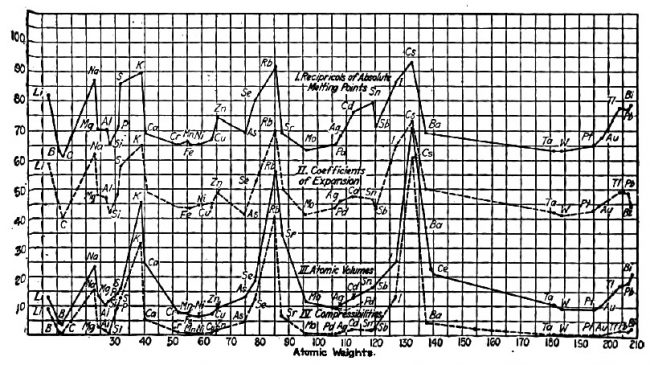 Graph of periodic properties by Richards [7]

Richards also studied atomic and molecular volume and he formulated a hypothesis of compressible atoms. He carried out a series of measurements of compressibilities of many elements and compounds in support of his theory, developing, applying and testing new methods and techniques. He introduced the use of transition temperatures of pure hydrated salts as fixed points in the standardization of thermometers, and the fundamentals of adiabatic calorimetry were developed under his guidance.[1] In 1914, Theodore Richards was the first American scientist to receive the Nobel Prize in Chemistry, earning the award “in recognition of his exact determinations of the atomic weights of a large number of the chemical elements”.[6] He was president of the American Chemical Society (1914), the American Association for the Advancement of Science (1917) and the American Academy of Arts and Sciences (1919). He was a member of the National Academy of Sciences and of most of the European academies. He received hon. degrees from Yale, Harvard, Haverford, Pittsburgh, Clark, Pennsylvania, Oxford, Manchester, Christiania, Prague and Berlin. He was awarded the Davy (1910), Faraday (1911), Willard Gibbs (1912), and Franklin (1916) medals. He was made a member of the National Research Council in 1916.

Theodore Richards died at Cambridge, Massachusetts, on April 2, 1928, at the age of 60.