You are here: Home › history › “Because it’s there” – George Mallory and Mount Everest 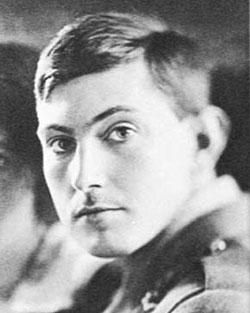 “Why would you want to climb Mount Everest?” George Mallory was asked this question in 1924 and gave the most obvious answer: “Because it’s there“. The famous mountaineer was born on June 18, 1886, and is best known for his expeditions to the highest mountain on earth.

“One comes to bless the absolute bareness, feeling that here is a pure beauty of form, a kind of ultimate harmony.”
– George Mallory, Letter to his wife Ruth Mallory (1921)

George Mallory – The Youth of a Mountaineer

George Mallory came from relatively simple backgrounds. His father Leigh Mallory was vicar of Mobberley, a large and prosperous community not far from Manchester. Mallory’s climbing talent showed up very early. When he was seven years old and sent to his room because of bad behaviour, he appeared a little later on the roof of the church: Mallory had climbed down the rain gutter of the parsonage and then the facade of the old bell tower. Growing up in England, George Mallory attended several schools and finally graduated from Winchester College. One of Mallory’s tutors at Winchester College was Graham Irving, an avid alpinist and member of the British Alpine Club. In 1904 Mallory Irving accompanied another Winchester student on a climbing tour in the French Alps. Irving was a somewhat unorthodox climber and the dangerous climbs he made with the two students in the Mont Blanc area brought him a formal warning from the board of the Alpine Club. After finishing school in the summer of 1905, Irving and Mallory travelled back to the Alps this time accompanied by Bullock and climbed the Dent Blanche, one of the four-thousand-metre peaks of the Swiss Alps, together on 21 August.

He went on to studying history at the Magdalene College and later teaching at Charterhouse School. Mallory found many among his friends who shared his passion for mountaineering. Already after the first year of his studies Mallory was sure that he should not become a clergyman like his father. He made friends with Rupert Brooke, Geoffrey and Maynard Keynes, Gerald Shove, James and Lytton Strachey as well as E. M. Forster, among others, and counted Virginia Woolf among his acquaintances,[7] all of whom belonged to the Bloomsbury Group. E. M. Forster leaned the figure of George Emerson in his 1908 novel A Room with a View even on the handsome George Mallory. His Cambridge Tutor had climbing experience, he knew the daughters of the President of the Alpine Club and friends of his introduced him to Geoffrey Young, then the most famous British mountaineer, whom he accompanied on climbing tours in Wales and the Alps shortly afterwards. After completing his studies, he was offered a position at the elite private school Charterhouse, where he was to teach history, mathematics, French and Latin.

Honeymoon and World War I

At the beginning of 1914, Mallory met Ruth Turner, who was 22 at the time, and immediately fell in love with her. The Turner family invited Mallory at Easter to spend the holidays with them in Venice. On May 1, 1914 the two got engaged and the marriage was set for July 29. Ruth Turner was the middle of three daughters of the widowed architect Thackeray Turner. He gave his daughter a generous dowry: The young couple received a pension of 750 British pounds suspended and was to receive their own house. Although both married on that date, the planned honeymoon, which was to lead to the Alps, did not take place. On 28 June, Archduke Franz Ferdinand and his wife were murdered by an assassin in Sarajevo, and shortly afterwards World War I broke out. Mallory never lost his interest in climbing, after participating in World War I and coming back to teaching at Charterhouse School for 3 years, he quit and decided to join the first expedition to Mount Everest.[1] 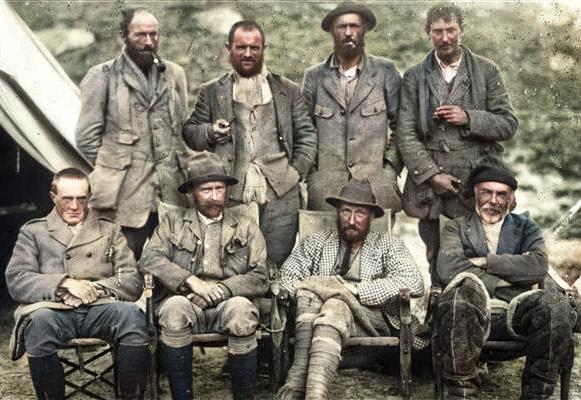 In 1921 Mallory was invited to participate in a British Everest expedition because of his achievements in the Alps. The aim of this expedition, organised by the Royal Geographical Society and the Alpine Club, was to explore the Everest massif and explore a possible route to the summit. A promising ascent was found on the Tibetan north side of Mount Everest.  The team led by Mallory was not equipped adequate for a serious climb to the top, nevertheless they were able to spot a route and decided to give it another try in the following year. Mallory also took part in the second expedition in 1922. This time the ascent to the summit should be tried. Here a height of over 8300 m was reached. A severe avalanche accident, in which seven porters died under Mallory’s leadership, led to the end of this expedition. Mallory made himself heavy reproaches in the rest of his life that the carriers had come to death. In 1924 Mallory and the other participants of this expedition were awarded the first Olympic Mountaineering Prize Prix olympique d’alpinisme during the Winter Olympics in Chamonix.

In 1924, George Mallory decided to give it one last try reaching the top of Mount Everest within the third exhibition. On his last attempt to reach the summit, Mallory and his companion Andrew Irvine were supposedly recognised by the British geologist Noel Odell on 8 June at an altitude of about 8500 metres. Afterwards they disappeared in the fog and were not seen alive again. Until today the speculations about whether one of them reached the summit remain. Today, many researchers and climbers discuss, whether the team reached the summit. For this purpose, many expeditions were organized, trying to find their bodies. The American mountaineer Conrad Anker found Mallory’s conserved body on May 1, 1999, 75 years after his last expedition, at an altitude of 8150 m on an inclined snow slope. Mallory’s body was in excellent condition. He had his snow goggles in his pocket, but it cannot be deduced from this that he descended at night, since the photo of his departure on June 8, 1924 at the North Col shows his spare goggles on his belt. The allegedly always on the body carried photo of his wife Ruth was no longer with him. He had wanted to take it off at the summit. Mallory wasn’t wearing oxygen equipment anymore. He will probably have dropped it high on the mountain after it had become empty and thus useless. They didn’t find a camera on him either. His body had two fall injuries: a lower leg fracture and a severe head wound. He will have fallen only a short distance; his body is not shattered as it would have been in a crash from the ridge. It is obvious that Mallory chose a different path to descend than to ascend. The fact that he climbed over the ridge route during the ascent now seems certain, when and why he left the ridge and went into the flank of the mountain, could not yet be clarified.

Until proven wrong Edmund Hillary and Tenzing Norgay count as the first people reaching the summit of the Mount Everest 29 years after Mallory’s last attempt.[2,3]