You are here: Home › astronomy › Georg von Peuerbach and the Ptolemaic Astronomy

On April 8, 1461, Austrian astronomer, mathematician and instrument maker Georg von Peuerbach passed away. He is best known for his streamlined presentation of Ptolemaic Astronomy in the Theoricae Novae Planetarum, a task being finally completed by famous astronomer Johannes Müller von Königsberg, better known as Regiomontanus.[5]

Georg Peurbach’s father was Ulrich Aunpekh. The name Peurbach is just derived from the town in which they lived, about 40 km west of Linz, Austria. His birthdate must be sometime after 1421, his standard birthdate, May 30, 1423, is derived from a sixteenth-century horoscope. Nothing is known of his early life, the first record being his matriculation at the University of Vienna in 1446, where he matriculated under the name Georgius Aunpekh de Pewrbach. Georg graduated with a bachelor’s degree in 1448 and subsequently studied the standard arts course of this time period consisting mainly of the humanities. It is likely that he would have studied some mathematics but the expertise which he gained in astronomy must have been self taught as there were no professors of astronomy at the University of Vienna during Peuerbach’s enrollment.

From 1448 to 1451 Peuerbach traveled through central and southern Europe, most notably in Italy, where he lectured on astronomy in Padua. His lectures led to offers of professorships at several universities, including those at Bologna and Padua. During this time he also met Italian astronomer Giovanni Bianchini of Ferrara and cardinal Nicolas of Cusa, who became interested in the young man. He returned to the University of Vienna in 1453, earned his Masters of Arts, and began lecturing on classical Latin poetry including Virgil and Juvenal. His scientific teaching was done chiefly in private, his most famous pupil being Johann Müller of Königsberg, later known as Regiomontanus. Müller was currently a student at the university and, after he graduated in 1452 at the age of 15, began collaborating extensively with Peuerbach in his astronomical work.[5]

Peuerbach’s own literary aspirations appear in Latin love poems addressed to a young Carthusian novice and in two letters preserved in a collection of model epistles. He established a solid reputation in mathematics, astronomy, and astrology, interspersing his academic duties with service as a court astrologer.[2] Among his first patrons was the nephew of Emperor Frederick III of Habsburg, young King Ladislaus V Posthumus, who ruled lower Austria, Bohemia and Hungary until his early death in 1457. Ladislaus resided primarily in Prague and Vienna, allowing Peuerbach to maintain his position at the University of Vienna. In 1457, following the assassination of two notable political figures, Ladislaus fled Vienna. He died of Leukemia later that year. Rather than taking of service with either of Ladislaus’ successors, Peuerbach accepted an appointment as court astrologer to Frederick III, who held court in Wiener Neustadt, near Vienna.[3] 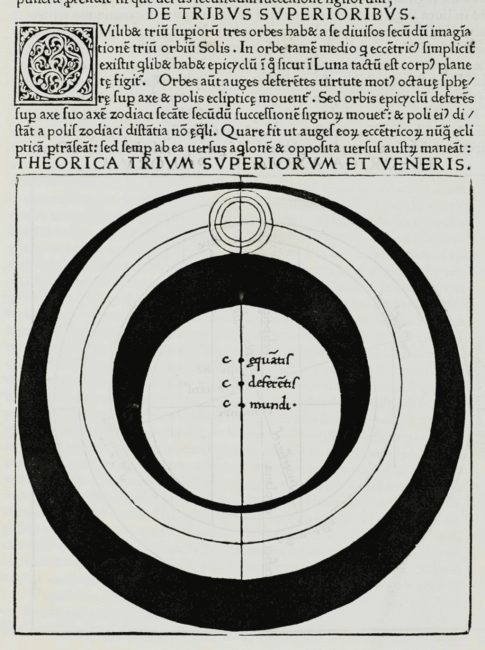 A Major Influence for Kepler and Copernicus

Peuerbach was instrumental in bringing about a relationship between the natural sciences and the humanities. Together with his teacher, Johannes von Gmunden, and his student and colleague, Regiomontanus (J. Müller), Peuerbach established the first School of Mathematicians at the University of Vienna and made mathematics an ancillary science of astronomy.[3] One of Peuerbach’s best known works is his Theoricae Novae Planetarum. It began as a series of lectures transcribed by Regiomontanus. The Theoricae Novae was an attempt to present Ptolemaic astronomy in a more elementary and comprehensible way. The book was very successful, replacing the older Theoricae Planetarum Communis as the standard university text on astronomy. By the late 17th century, this textbook had appeared in more than 50 Latin and vernacular editions and commentaries and was studied by many later-influential astronomers including Nicolaus Copernicus and Johannes Kepler.[2,7,8]

Peuerbach collaborated with Regiomontanus on a number of projects, including the observation of what came to be known as Halley’s Comet in 1456, and of a lunar eclipse on September 3, 1457 from a site near Vienna, where he noted that it had occurred 8 minutes earlier than had been predicted by the Alphonsine Tables, the best available eclipse tables at the time. He then computed his own set of eclipse tables, the Tabulae Eclipsium. Widely read in manuscript form beginning around 1459 and formally published in 1514, these tables remained highly influential for many years.

He also constructed celestial spheres, large globes which depicted the stars. He wrote on the computation of sines and chords in Tractatus super propositiones Ptolemaei de sinubus et chordis using and explanation based on that of Islamic astronomers as well as one based on Ptolemy. His book Algorismus, an elementary textbook on practical calculations with integers and fractions, was popular and reprinted several times.[1] In 1460, at the behest of Johannes Cardinal Bessarion, one of the most learned scholars of his time with a spread knowledge of Greek language and learning with a personal library that included a large collection of Greek manuscripts, Peuerbach began an epitome, or abridgment, of Ptolemy’s Almagest.[9] Cardinal Bessarion invited him to come to Rome to study Ptolemy in the original Greek, instead of from a faulty Latin translation. Peuerbach accepted on the condition that Regiomonanus accompany him, but he died in 1461 before the journey could be undertaken. At the time of his death, Peuerbach had completed only the first six of 13 books; he asked Regiomontanus to complete the work (c. 1462), which was published in 1496 as Epytoma…in Almagestum Ptolomei.[3]

Although it runs to about half the length of the Almagest, the Epitome is nevertheless a model of clarity and includes everything essential to a working understanding of mathematical astronomy and even manages to clarify sections in which Ptolemy omits steps or is somewhat obscure. The Epitome is the true discovery of ancient mathematical astronomy in the Renaissance because it gave astronomers an understanding of Ptolemy that they had not previously been able to achieve . Copernicus used it constantly, sometimes in preference to the Almagest; and its influence can be seen throughout De revolutionibus.[4]