You are here: Home › astronomy › Georg Joachim Rheticus and the Copernican Revolution 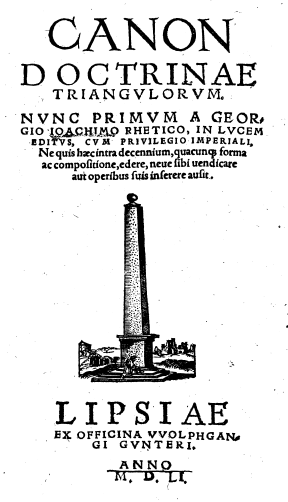 On February 16, 1514, mathematician, cartographer, navigational-instrument maker, medical practitioner, and teacher Georg Joachim Rheticus was born. He is perhaps best known for his trigonometric tables and as Nicolaus Copernicus’ [4] sole pupil, who facilitated the publication of his master’s famous work De revolutionibus orbium coelestium (On the Revolutions of the Heavenly Spheres).

Georg Joachim Rheticus was born in Feldkirch, the county of Tyrol in the Holy Roman Empire, as the son of Georg Iserin, the town medical officer of Feldkirch, and the northern Italian noblewoman Thomasina de Porris. He was taught by his father in his early life, but when the young Rheticus was only 14 years old, his father was accused of witchcraft and fraud and executed in 1528. The boy was then highly supported by Achilles Gasser, who took over his father’s medical practice. He helped Rheticus to begin his studies at the Latin school in Feldkirch, continuing his education by studying mathematics in Zurich from 1528 to 1531, and then at the University of Wittenberg, where he earned the degree of Master of Liberal Arts in 1536. [1]

Rheticus was then appointed teacher of mathematics and astronomy at the University of Wittenberg after he received his degree. He was back then supported by Philipp Melanchthon,[6] who also helped Rheticus to study with the leading astronomers at the time. In 1538, Rheticus traveled to Nuremberg where he met famous polymath and instrument maker Johann Schöner [5] as well as the printer Petreius, who presumably commissioned him to persuade Nicolaus Copernicus to publish his magnum opus in Nuremberg. At least Petreius gave him three books from his publishing house as a gift for Copernicus.[16] In Ingolstadt, Rheticus visited mathematician, astronomer and cosmographer Peter Apianus and went on to Tübingen in order to meet humanist and philologist Joachim Camerarius, the rector of the University of Leipzig. In the Spring of 1539, Rheticus arrived at Frombork (Frauenburg) in Ermland where he studied for two years with Copernicus. An experience he remembered as following:

“I heard of the fame of Master Nicolaus Copernicus in the northern lands, and although the University of Wittenberg had made me a Public Professor in those arts, nonetheless, I did not think that I should be content until I had learned something more through the instruction of that man. And I also say that I regret neither the financial expenses nor the long journey nor the remaining hardships. Yet, it seems to me that there came a great reward for these troubles, namely. that I, a rather daring young man compelled this venerable man to share his ideas sooner in this discipline with the whole world.” [2]

In 1539, the Narratio Prima de libris revolutionum Copernici (First report to Johann Schöner on the Books of the Revolutions of the learned gentleman and distinguished mathematician, the Reverend Doctor Nicolaus Copernicus of Toruń, Canon of Warmia, by a certain youth devoted to mathematics) was published. It is believed that to this day, the work remains the best introduction to Copernicus’s work. Rheticus managed to put himself in favor with the Duke Albert of Prussia and asked successfully for the permission to publish Copernicus’s De Revolutionibus. In 1541, Rheticus returned to the University of Wittenberg, where he was elected dean of the Faculty of Arts. In the same year, he published the trigonometrical sections of Copernicus’s De Revolutionibus, adding tables of sines and cosines, however, not naming them this way. [1,2] Rheticus was the first to contribute significantly to the spread of the Copernican world system. He was the only student of Copernicus, and during his stay in Frauenburg he was able to convince him to put his main work into print. During this time he published the first communication about the same in the Narratio Prima de libris revolutionum Copernici. He had to leave the correction of the proofs of De revolutionibus to Andreas Osiander.[9] The latter took out a theological treatise by Rheticus on the compatibility of the heliocentric system with Holy Scripture and anonymously replaced it with a new preface written by him, presenting the new system as a mere computational model. 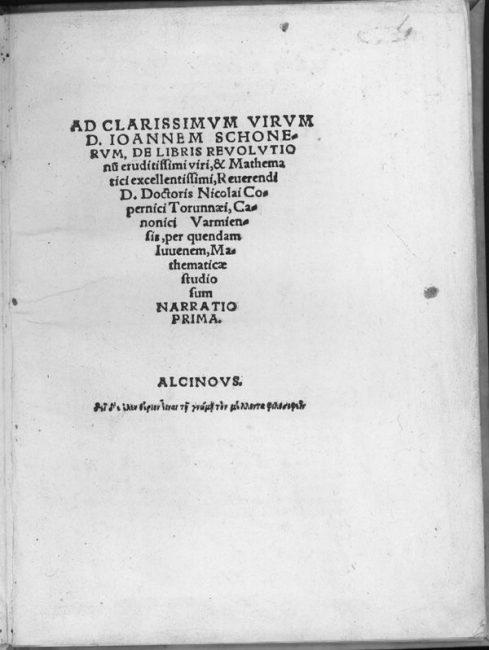 One year later, Rheticus left Wittenberg for Nuremberg, where he supervised the printing of De Revolutionibus, but continued his journey to Leipzig before the work was finished. By 1548 he was on the road again, visiting Gerolamo Cardano [8] in Milan and beginning medical studies in Zurich. Again through Melanchthon’s intercession, he was admitted to the theological faculty in Leipzig. He began his teaching position in Leipzig as the professor of higher mathematics. Rheticus managed to publish a calendar and ephemeris of 1550 and also an ephemeris and calendar of 1551. In 1551 however, the scientist was forced to leave Leipzig because he was suspected of having a homosexual affair with a student. Rheticus was found guilty of raping the son of Hans Meusel, a merchant, though the exact nature of this encounter has been called into question. According to Meusel, Rheticus “plied him with a strong drink, until he was inebriated; and finally did with violence overcome him and practice upon him the shameful and cruel vice of sodomy“.[12] He fled following this accusation, for a time residing in Chemnitz before eventually moving on to Prague.Rheticus was then found guilty in his trial in absentia and consequently exiled from Leipzig for 101 years as well as having his possessions impounded. Now even Melanchton turned away from Rheticus.

Rheticus then managed to study medicine in Prague and moved to Kraków where he became a practicing doctor, but he continued with his famous trigonometric tables and made instruments which he used for observations and experiments. He also earned significant merits through his 10-digit tables of trigonometric functions, which progressed from 10 to 10 seconds, but the calculation of which was only completed by his pupil Valentin Otho, who also published them in the Opus palatinum de triangulis (Heidelberg 1596). [2,3] Shortly before his death in 1573, Rheticus moved to Kaschau in Upper Hungary, where the imperial governor Hans Rueber zu Pixendorf (1529-1584) took him in.