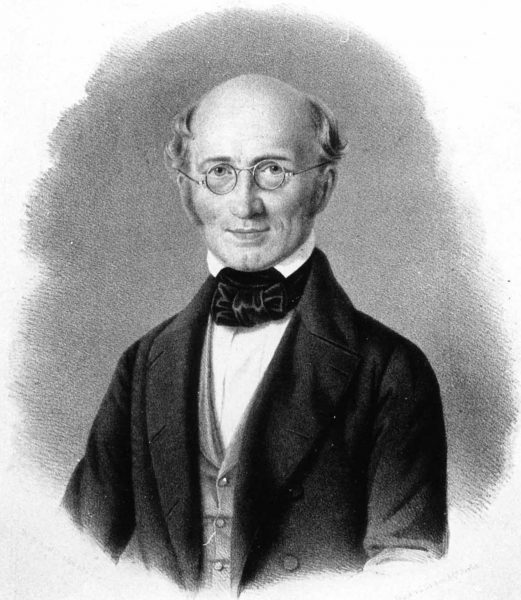 On February 17, 1798, German psychologist and post-Kantian philosopher Friedrich Eduard Beneke was born. Beneke argued that inductive psychology was the foundation for the study of all philosophical disciplines. He rejected the existing idealism for a form of associationism influenced by both Immanuel Kant and Locke. Beneke agreed with Herbart’s general idea that mathematics should be introduced into psychology, but he felt that Herbart’s attempt to quantify psychological phenomena was insufficiently empirical. Beneke suggested that more precise observations were needed, through psychological experiments.

“When man’s striving has become so concentrated that it is directed with perseverance toward one purpose, he is said to possess character.”
– Friedrich Eduard Beneke, as quoted in [9]

Friedrich Beneke became privatdozent  in Berlin, where his lectures were prohibited in 1822 due to Beneke’s strong opposition to Hegel who was back then quite dominant in the area.[5] However, since he had published a foundation on the physics of morals in Berlin in 1822, in which materialism was suspected, he was forbidden to continue his lectures. To prevent misinterpretations, he published the “Schutzschrift für meine Grundlegung zur Physik der Sitten” (Leipzig 1823) and moved to Göttingen in 1824, where he taught as a private lecturer. Here he dealt mainly with psychological questions. Beneke was allowed to return to Berlin in 1832 where Beneke received an appointment as professor extraordinarius at the university.

When Friedrich Beneke began to study psychology, he began to maintain that in empirical psychology is to be found the basis of all philosophy, and his rigid treatment of mental phenomena by the genetic method. Beneke developed the idea that the perfected mind is a development from simple elements, and the first problem of philosophy is the determination of these elements and of the processes by which the development takes place. Beneke promoted that psychology should be considered as part of the natural sciences.

The Genesis of the Completed Mind

Beneke assumed that originally there is no “formed product” in the mind, and further that definite faculties do not originally exist. Instead, the soul consists of a variety of powers, faculties or forces, differing from one another only in tenacity, vivacity, receptivity and grouping. The primitive immaterial forces further acquire definiteness or form through the action upon them of stimuli or excitants from the outer world. Hence, external impressions appropriated by the internal powers is the first fundamental process in the genesis of the completed mind.  If the union of impression and faculty be sufficiently strong, consciousness arises, and definite sensations and perceptions begin to be formed.

The primitive sensations are however not to be identified with the special senses, for each of these senses is a system of many powers which have grown into a definite unity, have been educated by experience. According to Beneke, the process of the formation of new powers mainly takes place during sleep. Further, the combination between stimulus and power may be weak or strong. If the combination is weak, then two elements are said to be movable, and they may flow over from one to another of the already formed psychical products. However, a formed faculty still exists on the removal of its stimulus and sinks back as a trace into unconsciousness. There, the faculty may be recalled by the application of a stimulus or by the attraction towards it of some of the movable elements or newly formed original powers. The described traced and the flowing over of the movable elements are the most important conceptions in Beneke’s psychology. Beneke manages to explain that formed faculties are simply developments from traces of earlier processes. According to Beneke, the process of mental development is therefore the result of the action and interaction of the simple laws.

On practical philosophy he published the journal Archiv für die pragmatische Psychologie etc. since 1851. (1851-1853). On 1 March 1854 Beneke disappeared, and more than two years later on June 3, 1856, his remains were found in the canal near Charlottenburg. There was some suspicion that he had committed suicide in a fit of mental depression.