You are here: Home › botany › Gaspard Bauhin and the Classification of Plants 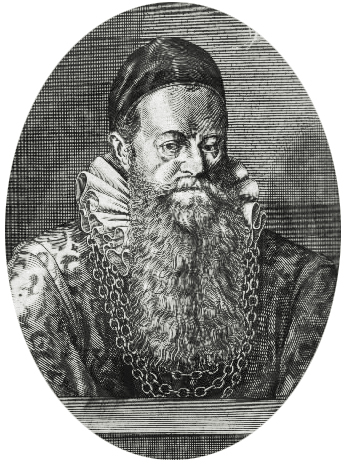 On January 17, 1560, Swiss botanist Gaspard Bauhin was born. He is best known for his contributions to the field of botany, and especially for his classification of plants. He was a disciple of the famous Italian physician Girolamo Mercuriale and he also worked on human anatomical nomenclature.

Caspar Bauhin came from the Bauhin medical family, which had fled to Basel as Huguenots from Paris and Amsterdam; his father was the French physician  Jean Bauhin. Caspar Bauhin studied medicine at the University of Basel, specialising in anatomy, including with Felix Platter. Further places of study from 1577 onwards were Padua, including Girolamo Mercuriale, Montpellier, Paris and Tübingen. At the University of Tübingen he deepened his knowledge in botany with Leonhart Fuchs. [7] In 1581 Bauhin received his doctorate in Basel. From 1582 he was teacher of Greek, from 1589 lecturer and then first full professor of anatomy and botany at the University of Basel, for which he set up its botanical garden. In 1614 he was appointed city physician and professor of practical medicine (succeeding Felix Platter) at the university. In the years 1592, 1611 and 1619 Bauhin was rector of the University of Basel.

Professor and City Physician in Basel

Bauhin was appointed city physician, professor of the practice of medicine, rector of the university, and dean of his faculty. Bauhin held public sections and botanical excursions as part of his medical training in Basel. He pushed the construction of the Basler Theatrum anatomicum and the Hortus medicus (1589). During his career, the scientist published several works in the field of botany. The most important and most influential work is presumably his ‘Pinax Theatri Botanici, seu Index in Theophrasti, Dioscoridis, Plinii, et botanicorum qui a seculo scripserunt opera‘, published in 1596. The work is considered an early and widely celebrated attempt to name and catalog all known kinds of plants.

The Naming of Plants

The scientist managed to lit and describe about 6,000 species, while introducing the practice of naming plants by their genus and species (binomial nomenclature), a system that found wide application by the botanists John Ray [3] and Linnaeus. Bauhin also planned a ‘Theatrum Botanicum‘ and it was meant to be comprised in twelve parts folio, of which he finished three. However, only one was published in 1658. In the field of anatomy, Bauhin’s most notable work is considered ‘Theatrum Anatomicum infinitis locis auctum‘, published in 1592.

The author of numerous publications on anatomical content in which he summarized his lectures and anatomical-pathological demonstrations, gave a meticulous and almost complete list of all body parts and added physiological and pathological explanations. He is still known in medical circles today as the “discoverer” or official first describer of the ileocecal valve, an occlusion at the transition between the large intestine and the small intestine, which he calls the Bauhin valve.

At yovisto academic video search, you can learn more about botany in the video lecture on ‘Human Livelihoods Depend on Wild Flowers: Kew’s Millennium Seed Bank explained‘.