You are here: Home › mathematics › Oswald Veblen and Foundations of modern Topology 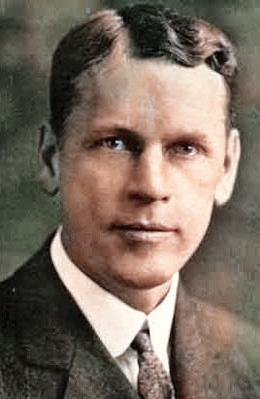 On June 24, 1880, American mathematician, geometer and topologist Oswald Veblen was born. Veblen‘s work found application in atomic physics and the theory of relativity. He proved the Jordan curve theorem in 1905 while this was long considered the first rigorous proof, many now also consider Jordan‘s original proof rigorous.

“Mathematics is one of the essential emanations of the human spirit, a thing to be valued in and for itself, like art or poetry.”
– Oswald Veblen, in Bulletin of the American Mathematical Society, Volume 30 (1924), p. 289.

A System of Axioms for Geometry

Oswald Veblen was born in Decorah, Iowa to Andrew Anderson Veblen, a teacher at Luther College in Decorah, Iowa, later professor of mathematics and physics at the University of Iowa, and his wife Kirsti. Veblen’s uncle was Thorstein Veblen, a well-known economist and social critic. Veblen went to school in Iowa City and did his undergraduate studies at the University of Iowa and Harvard University, where he was awarded a second B.A. in 1900. For his graduate studies, he went to study mathematics at the University of Chicago, where he obtained a Ph.D. in 1903. The head of the Chicago department was the highly regarded mathematician E. H. Moore. Among Moore’s interests was David Hilbert’s recent work on the foundations of geometry.[5] Veblen attended Moore’s fall 1901 seminar covering this topic. Hilbert had employed the undefined terms of point, line, and plane, to devise a scheme of 20 axioms. Questions soon arose over the independence of these axioms and Moore identified and sharpened the independence deficiencies in his seminar. Veblen was inspired to go further in his 1903 dissertation, A System of Axioms for Geometry. In it Veblen gave an axiom system based on point and order rather than on the traditional notions of point, line and plane. He presented twelve axioms for Euclidean geometry which he proved to be an complete system of axioms and he also proved the independence of the axioms.[1,4]

He continued in Chicago after the award of his doctorate as an associate in mathematics. Already at this time he had begun to undertake research in topology and he published Theory on plane curves in non-metrical analysis situs in 1905. Topology (from the Greek τόπος, place, and λόγος, study) in mathematics is concerned with the properties of space that are preserved under continuous deformations, such as stretching and bending, but not tearing or gluing. Topology developed as a field of study out of geometry and set theory, through analysis of concepts such as space, dimension, and transformation. Such ideas go back to Gottfried Leibniz,[6] who envisioned the geometria situs (Greek-Latin for “geometry of place”) and analysis situs (Greek-Latin for “picking apart of place”). Leonhard Euler’s Seven Bridges of Königsberg Problem and Polyhedron Formula are arguably the field’s first theorems.[7]

Veblen taught mathematics at Princeton University from 1905 to 1932. During World War I, Veblen served first as a captain, later as a major in the army. He sought a commission in the Ordnance Department in the spring of 1917 and was appointed to the Office of Ballistics Research at the new Aberdeen Proving Ground in Maryland. In 1926, he was named Henry B. Fine Professor of Mathematics. In 1932, he helped organize the Institute for Advanced Study in Princeton, resigning his professorship to become the first professor at the Institute that same year. He had James Alexander, Albert Einstein, John von Neumann and Hermann Weyl, all mathematicians he had chosen, as original Institute members.[1] He kept his professorship at the Institute until he was made emeritus in 1950.

Veblen’s Analysis Situs (1922) was the first book to cover the basic ideas of topology systematically. It was his most influential work and for many years the best available topology text. Veblen also laid the foundations for topological research at Princeton.[2] Soon after the discovery of general relativity, Veblen turned to differential geometry and took a leading part in the development of generalized affine and projective geometry. His work The Invariants of Quadratic Differential Forms (1927) is distinguished by precise and systematic treatment of the basic properties of Riemannian geometry. In collaboration with his brilliant student John Henry Whitehead, Veblen extended the knowledge of the Riemann metric for more general cases in The Foundations of Differential Geometry (1932).

Veblen’s belief that “the foundations of geometry must be studied both as a branch of physics and as a branch of mathematics” quite naturally led him to the study of relativity and the search for a geometric structure to form a field theory unifying gravitation and electromagnetism. With respect to the Kaluza-Klein field theory, which involved field equations in five-dimensional space, he provided the first physical interpretation of the fifth coordinate. By regarding the coordinate as a gauge variable (a gauge theory is a type of field theory in which the Lagrangian is invariant under a continuous group of local transformations), Veblen was able to interpret the theory as one involving four-dimensional space-time. In connection with this contribution, Veblen provided a new treatment of spinors (expressions used to represent electron spin) that he summarized in Projektive Relativitätstheorie (1933; “Projective Relativity Theory”).

Veblen died in Brooklin, Maine, in 1960 at age 80. After his death the American Mathematical Society created an award in his name, called the Oswald Veblen Prize in Geometry. It is awarded every three years, and is the most prestigious award in recognition of outstanding research in geometry.

George Dyson, Oswald Veblen And The Institute For Advanced Study, [11]