You are here: Home › literature › August Wilhelm Iffland and the Iffland Ring 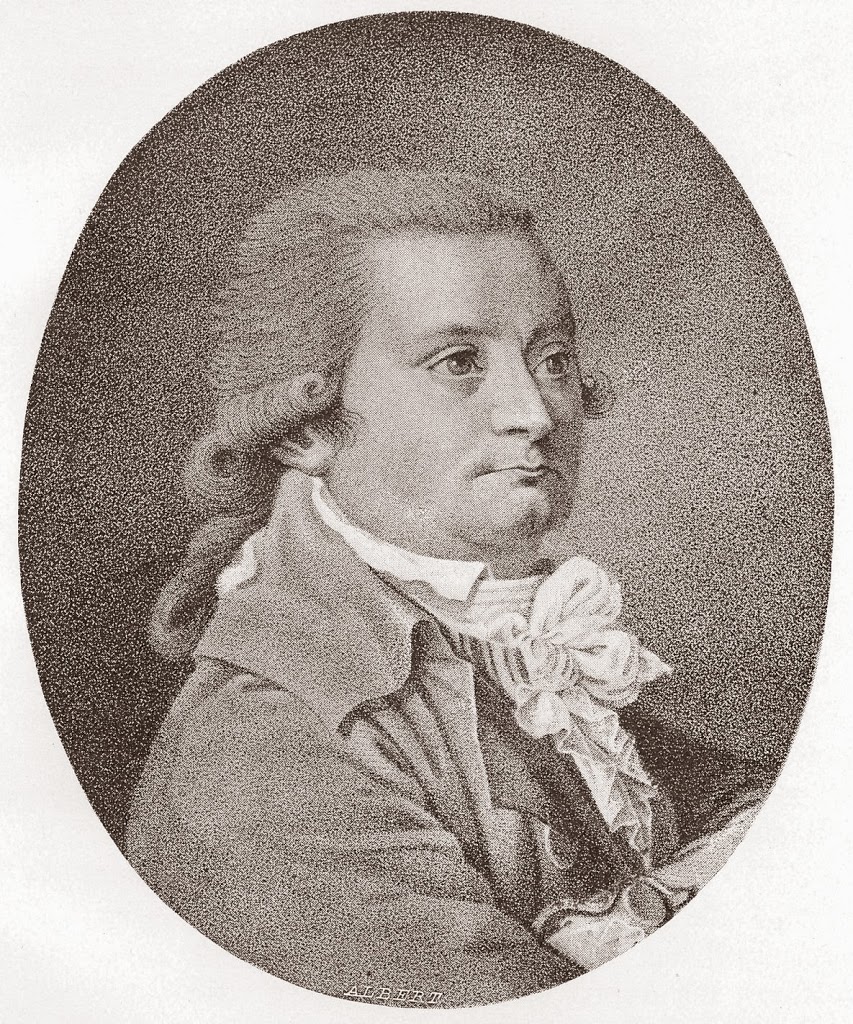 On April 19, 1759, German actor and dramatic author August Wilhelm Iffland was born. He was the most important actor of his age and is best remembered for playing the main part of Franz Moor in Friedrich Schiller‘s ‘The Robbers‘.[6] And there is this ring, the Iffland-Ring, which bears Iffland‘s likeness, and is borne by the most important German-speaking actor, as decided by his predecessor. When I first heard the story of the Iffland-Ring, to me it sounded a little bit like a ‘Lord of the Ring‘ like story. There is a ring, passed over from generation to generation, and only its bearer decides who is worthy to bear it next…

Who was August Wilhelm Iffland?

OK, so who was August Wilhelm Iffland? Born in Hanover, capital of Lower Saxony, in northwestern Germany, his father originally intended him to be a clergyman, but Iffland preferred the stage, and in 1777, at age eighteen ran away to the city of Gotha in central Germany, in order to prepare himself for a theatrical career. When Iffland first started his career in theater, it was the German actor Konrad Ekhof who taught Iffland both the art and indeed business of acting. Iffland made fast progress. In 1779, Iffland joined the cast of the National Theatre of Mannheim at the request of Prince Charles Theodore of Bavaria, where Iffland made a name for himself by developing and performing acts that became famous for their psychological and realistic touch.

In 1782, Iffland who performed on every single one of the main stages in Germany, triumphed in the role of Franz Moor in The Robbers, written by the German poet, philosopher and playwright Friedrich von Schiller. Schiller enjoyed Iffland’s acting so much that a fruitful collaboration developed between the two men. Iffland also gained an important reputation in the country by performing on every single one of the main stages of Germany. In April 1796, Iffland travelled to Weimar, responding to the invitation of the famous German poet, philosopher and playwright Johann Wolfgang von Goethe had extended to him. In the same year he settled in Berlin, where Iffland became director of the national theater of Prussia, and in 1811 he was made general director of all presentations before royalty. As an actor, Iffland distinguished himself less by genius than by an artfully calculated performance down to the smallest detail. He was most successful in charismatic and comic roles as well as comfortably touching ones that belonged to the sphere of family and bourgeois life. He was less capable of tragic and heroic roles due to his appearance. 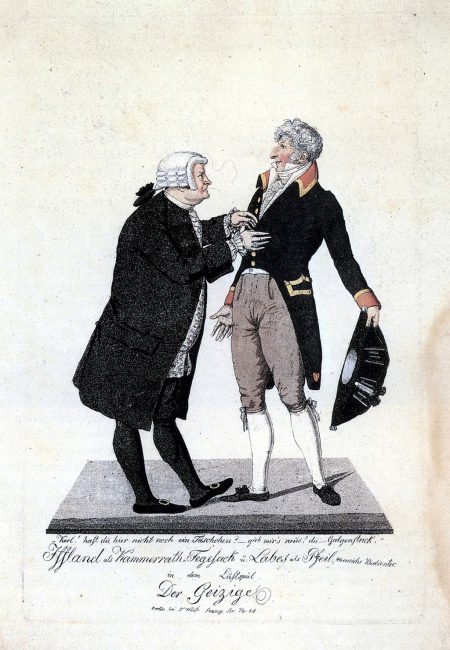 Iffland as Fegesack and Franz Labes as Arrow in Molière’s “The Miser”, Act I, 3rd performance, lithograph by Friedrich Weise after a Berlin performance c. 1810

The Most Important Actor of his Time

Iffland produced all the classical works of Goethe and Schiller with conscientious care, but he had little understanding for the drama of the romantic writers. As an actor, he was conspicuous for his comedy parts: fine gentlemen, polished men of the world, and distinguished princes. On the other hand, Iffland also had success as an author himself. His most famous plays are The Hunters (“Die Jäger”, 1785), Dienstpflicht (“Compulsory Service”), and Die Hagstolzen (“The Old Boys”). The form of play in which Iffland was most at home, both as an actor and playwright, was the domestic drama, the sentimental play of everyday life. His works show little imagination, but they display a thorough mastery of the technical necessities of the stage, and a remarkable power of devising effective situations. As a dramatist, he is most significant in depicting manners; his plays show less moralizing breadth than an extraordinary stagecraft and knowledge of human nature and a cozy, moral tendency. Moreover, he was also an important drama critic. In fact, German actors used to take with great importance the remarks that Iffland could make on their works in his Almanach für Theater und Theaterfreunde. Goethe also awarded Iffland the Satyr buttons as an award for the most important actor of his time.

What is today famous as the “Iffland-Ring”, which is engraved with the portrait of Iffland, is since Ludwig Devrient worn by a German actor chosen by his predecessor as one of the main representatives of the profession. Iffland was inspired by the Romanticism. Thus, he might be have been inspired to commission the ring the play Nathan the Wise by Gotthold Ephraim Lessing telling the famous “Ringparabel“. The circumstances of where and when Iffland passed on the ring to its first bearer Ludwig Devrient are uncertain. But there is the story that Iffland handed the ring to Devrient in 1814, after his last performance in Breslau. Shortly after, in September 1814, Iffland died in Berlin.

The first documented mention of today’s Iffland Ring as an award is the estate of the actor Friedrich Haase, who died in 1911. He presented the legend of this ring with a slip of paper on the ring case and an explanatory accompanying letter and at the same time determined that when the wearer died, the ring should be assigned by him to the “most worthy one at present“. Haase bequeathed it to Alfred Bassermann, who gave it to him one after the other to three colleagues (Alexander Girardi, Max Pallenberg and Alexander Moissi), who all died surprisingly early, however, Bassermann had laid it on the coffin of the late Alexander Moissi and he had to be rescued at the last moment, so that he finally deposited it in 1935 in the Austrian National Library in Vienna. Bassermann, who emigrated from Germany in 1934 and Austria in 1938 because of discrimination against his Jewish wife, had had Werner Krauß in mind, but did not want to hand him the ring because of his attitude during National Socialism, especially because of his participation in the anti-Semitic film Jud Süß. After Bassermann’s death in 1952, it was unclear how the Ring would be handed over until 1954, when it was awarded by the Cartel Association of German-speaking Stage Members to Werner Krauß. Because of the unclear inheritance law in 1952/54, guidelines were issued by the Austrian Ministry of Education to regulate the passing on of the ring without any doubt in the future.

After Josef Meinrad, Swiss actor Bruno Ganz was the bearer of the Iffland Ring from 1996-2019. After Ganz’ death, the Austrian Minister of Culture, Gernot Blümel, announced on 22 March 2019 that the German actor Jens Harzer had been chosen to wear the ring.