You are here: Home › physics › Frederick Reines’ Chase for the Ghost Particle 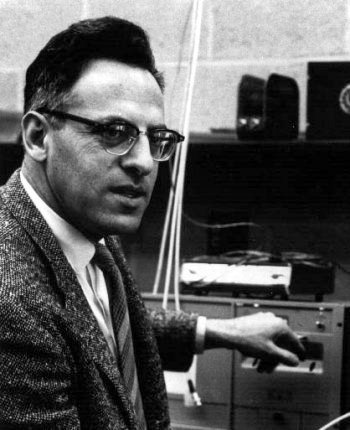 On March 16, 1918, American physicist and Nobel Laureate Frederick Reines was born. He is best known for his co-detection of the neutrino with Clyde Cowan in the neutrino experiment. The neutrino is a subatomic particle, a tiny lepton with little or no mass and a neutral charge which had been postulated by Wolfgang Pauli in the early 1930s but had previously remained undiscovered. Reines shared the Nobel Prize with physicist Martin Lewis Perl, who discovered the tau lepton.

Frederick Reines was born in Paterson, New Jersey, as one of four children of Gussie and Israel Reines, Jewish emigrants from the same town in Russia. The family moved to Hillburn, New York,  where his father ran the general store . Reines once described the day he became fascinated by science:

“The first stirrings of interest in science that I remember occurred during a moment of boredom at religious school, when, looking out of the window at twilight through a hand curled to simulate a telescope, I noticed something peculiar about the light; it was the phenomenon of diffraction. That began for me a fascination with light.” [1]

His early education was mostly shaped by his older siblings, who became doctors of medicine and lawyers. Also, Reines’ scientific career was shaped by his membership in the Boy Scouts where he began to build crystal radios. In High School, Reines was encouraged by a science teacher to use the school’s lab and in his year book he noted as his principal ambition “To be a physicist extraordinaire.” Even though initially intending to enroll at MIT, Reines decided to go with the Stevens Institute of Technology  to study engineering. Reines received his Master of Science in mathematical physics in 1941 and continued his career at New York University, where he worked in experimental experimental cosmic ray physics under the direction of S.A. Korff, and wrote a theoretical Ph.D thesis on “The Liquid Drop Model for Nuclear Fission“. He was recruited by as a staff member under Richard Feynman in the Theoretical Division at the Los Alamos Scientific Laboratory, to work on the Manhattan Project.[3] He directed his efforts to the basic understanding of the effects of nuclear blasts and coauthored a study of the air blast wave with John von Neumann.[4]

In 1951, during a sabbatical-in-residence from his duties at Los Alamos, Frederick Reines decided to attempt the observation of the neutrino. He formed a collaboration with Clyde Cowan and decided that the reactor at Hanford, Washington would suit best as source of neutrinos. In 1953, John Wheeler contacted them about the new Savannah River reactor facility being built in South Carolina. The men transferred their operations there and observed the electron antineutrino in 1956. Reines started the first series of experiments at the Savannah River site to study the properties of the neutrino after Cowan left Los Alamos.

The neutrino was first postulated by Wolfgang Pauli in 1930 to explain how beta decay could possibly conserve energy, momentum, and angular momentum.[5] He hypothesized that an undetected particle that he called a “neutron” and he considered that the new particle was emitted from the nucleus together with the electron or beta particle in the process of beta decay. Two years later, James Chadwick discovered a much more massive nuclear particle and also named it a neutron.[6]  Enrico Fermi, who developed the theory of beta decay, then coined the term neutrino to resolve the confusion. Fermi published a paper in 1934, unifying Pauli’s neutrino with Paul Dirac’s positron [7] and Werner Heisenberg’s neutron – proton model [8] and gave a solid theoretical basis for future experimental work. But when the journal Nature rejected his paper, it was published to an Italian journal and the general lack of interest in his theory back then probably caused Fermi to switch to experimental physics. In 1942, Wang Ganchang first proposed the use of beta capture to experimentally detect neutrinos. In the 20 July 1956 issue of Science, Clyde Cowan, Frederick Reines, F. B. Harrison, H. W. Kruse, and A. D. McGuire published confirmation that they indeed had detected the neutrino, a result that was rewarded almost forty years later with the 1995 Nobel Prize.[10] In this experiment, now known as the Cowan – Reines neutrino experiment, antineutrinos created in a nuclear reactor by beta decay reacted with protons to produce neutrons and positrons.

When Reines also left Los Alamos in 1959, he became Professor and Head of the Department of Physics of the Case Institute of Technology in Cleveland, Ohio. There his group worked in reactor neutrino physics, double beta decay, electron lifetime studies, searched for nucleon decay, and performed an experiment in a gold mine in South Africa that made the first observation of the neutrinos produced in the atmosphere by cosmic rays. Reines took his research group to the new University of California, Irvine campus in 1966, where he became the Dean of the School of Physical Sciences. Reines later was appointed Distinguished Professor of Physics at UCI in 1987 and became Professor Emeritus in 1988. The “Neutrino Group” at Irvine has been actively involved in a wide range of neutrino and elementary particle physics experiments, including its role in the Irvine-Michigan-Brookhaven proton decay experiment. This group has continued the program of reactor neutrino experiments, has been the first to observe double beta decay in the laboratory, and was awarded the 1989 Bruno Rossi prize in High Energy Astrophysics by the American Astronomical Society for its joint observation of neutrinos from supernova 1987A. The detection of the supernova neutrinos was a particularly gratifying outcome of the IMB experiment.

Frederick Reines died after a long illness at the University of California, Irvine Medical Center in Orange, California, on August 26, 1998.