You are here: Home › medical science › John Snow – Tracing the Source of the London Cholera Outbreak 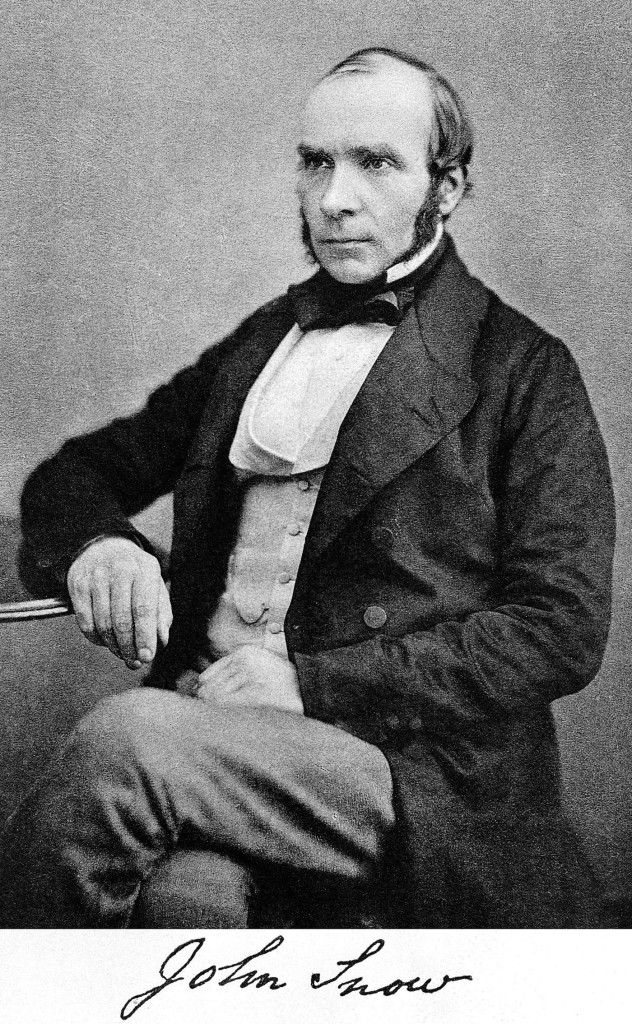 On March 15, 1813, English physician and a leader in the adoption of anaesthesia and medical hygiene John Snow was born. He is considered one of the fathers of modern epidemiology, in part because of his work in tracing the source of a cholera outbreak in Soho, London, in 1854.

Growing Up in a Poor Neighborhood

John Snow was born on 15 March 1813 in York, England, the first of nine children born to William and Frances Snow. His father a was a labourer who worked at a local coal yard. The neighbourhood was one of the poorest in the city, and was frequently in danger of flooding because of its proximity to the River Ouse. Growing up, Snow experienced unsanitary conditions and contamination in his hometown. Most of the streets were unsanitary and the river was contaminated by runoff water from market squares, cemeteries and sewage. From a young age, Snow demonstrated an aptitude for mathematics. At age 14, after attending a private school in York, he obtained a medical apprenticeship in Newcastle-upon-Tyne in 1827.

Cholera and the Royal College of Surgeons

In 1831, it is believed that he first encountered cholera. The disease entered Newcastle and devastated the town. Snow treated many victims of the disease and gained a lot of experience. In 1833 he left Newcastle and assisted the doctor John Watson in Burnop Field near Newcastle for a year. In 1834, after a short stay in York, he moved to the small village of Pateley Bridge in Yorkshire and worked as assistant pharmacist Joseph Warburton. During his apprenticeship Snow had become a vegetarian, in 1836 he joined the abstinence movement, in which Warburton was also involved. Snow enrolled as the Hunterian school of medicine on Great Windmill Street, London in 1836. He began his career at the Westminster Hospital in 1837 and was admitted as a member of the Royal College of Surgeons of England one year later.

After having published several articles in the Lancet and the London Medical Gazette in 1838/39, he began to present his research findings and inventions in lectures to the Medical Westminster Society in 1841. In 1841 he gave three such lectures, which were subsequently printed in the London Medical Gazette: on deformities of the thorax and spine in newborns, on the effect of death by asphyxiation and a ventilator for newborns invented by him. The innovation of this was that fresh air was not only supplied through the nose, but also exhausted air was sucked out through the mouth; and a device for puncture of the thoracic cavity, in which a valve mechanism was used to prevent air from entering the thorax.Snow received his B.M. degree in 1843 and was also admitted to the Royal College of Physicians and became one of the founding members of the Epidemiological Society of London, formed in response to the cholera outbreak of 1849.

A Pioneer in Anesthesiology

In October 1846 William Thomas Green Morton [4] carried out the first successful public anaesthesia with ether in the USA, the news of which was quickly circulated by the press. On December 28, 1846, in London at the home of dentist James Robinson, there was a demonstration of this kind, attended by John Snow. Thanks to his investigations into asphyxia and its causes of action in the blood circulation, he immediately started to investigate the new method and developed an improved apparatus for evaporation and inhalation of ether within only three weeks. Since January 1847, he has also presented his findings to the public through lectures and a series of publications, which are now regarded as the founding documents of anesthesiology. Most London surgeons have now had Snow perform anaesthesia on their patients.When James Young Simpson made the anesthetic effect of chloroform known in Edinburgh in the same year [5], Snow soon turned to this new remedy and began publishing about it in 1848 and switching its practical applications to it. Snow is said to have personally administered chloroform to Queen Victoria when she gave birth to the last two of her nine children.

Back then, the London sewer system had not reached the Soho district yet and as a result, Soho had to deal with serious health and hygiene problems. London’s government also decided to dump the city’s waste into the River Thames which caused a dramatic pollution of the water and eventually leading to the famous cholera outbreak of 1854. John Snow referred to the outbreak as “the most terrible outbreak of cholera which ever occurred in this kingdom“. Starting at the end of August, 1854, the outbreak caused presumably 500 deaths by September 10. Joseph Griffith’s Swayne, Frederick Brittan and William Budd studied wastewater and found comma-shaped microorganisms. In 1849, John Snow and William Budd presented a treatise in which they argued that cholera would be caused by living organisms in drinking water.

John Snow began investigating the disease by talking to locals. He managed to identify the source of the outbreak as the public water pump on Broad Street, today Broadwick Street. He performed several chemical experiments and microscope examinations. Eventually, authorities agreed to disable the well pump, ending the outbreak. Snow later started to map how the cases of cholera were centered on the pump. With the help of statistics and what is today known as the Voronoi diagram, Snow illustrated the quality of the source of water and cholera cases. Snow noticed one significant anomaly, being that none of the monks in the adjacent monastery contracted cholera. It turned out that the monks drank only beer, which they brewed themselves. Due to the fermented water, residents in the brewery were not infected. Snow also found out that Southwark and Vauxhall Waterworks Company was taking water from sewage-polluted sections of the Thames and delivering the water to homes with an increased incidence of cholera.

Snow worked closely with the physician and microbiologist Arthur Hill Hassall, who carried out microbiological investigations on water from pump systems and the Thames as well as on stool samples from patients and was able to detect the cholera virus, Vibrio cholerae. More precisely a microorganism of curved shape, myriads of vibriones teeming with every drop of every sample of rice-water discharges. In the history of public health and health geography, Snow’s study was probably the founding events of the science of epidemiology. In 1830 Snow had became a member of the Temperance Movement, and lived for a decade or so as a vegetarian and teetotaler. In the mid-1840s his health deteriorated, and he returned to meat-eating and drinking wine. He continued drinking pure water (via boiling) throughout his adult life. Snow suffered a stroke while working in his London office on 10 June 1858. He was 45 years old at the time. He never recovered, dying on 16 June 1858.