You are here: Home › inventor › How Tom Blake revolutionized the Surf Sport 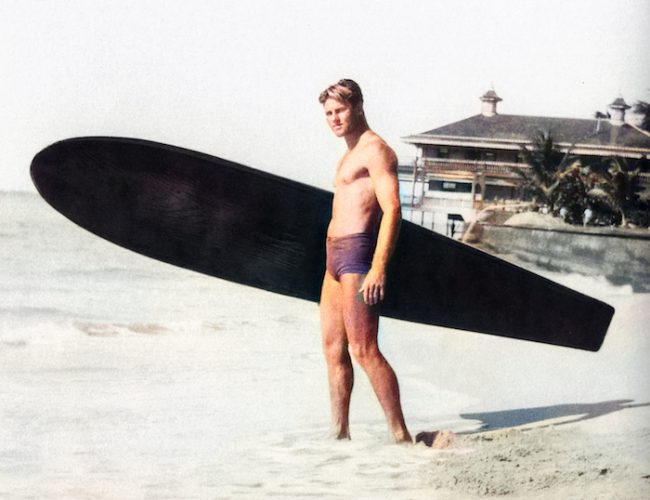 On March 8, 1902, American athlete, inventor, and writer Thomas Edward Blake was born. Blake is widely considered to be one of the most influential surfers of all time and a key figure in transforming surfing from a regional Hawaiian specialty to a nationally popular sport. He was the first to experiment with making better surfboards, revolutionizing board design in the process with lightweight materials and the fin. He also was the first to build a waterproof camera housing and inaugurated the tradition of surfers documenting themselves and their friends.

Tom Blake was born in Wisconsin and spent much time working in Detroit, New York, and Miami after graduating from High School. Around 1920, Blake met the legendary Hawaiian surfer Duke Kahanamoku at a movie theater. The handshake with the legend, as Blake later reported, highly influenced the young man: “I felt that somehow he had included an invitation to me to come over to his own Hawaiian islands… As I look back now I realize how much I was influenced by this first contact with the man who has become the best-known personality in the history of surfing“. One year later, Tom Blake moved to Santa Monica, California where he worked as a lifeguard and occasionally as a stuntman in films. Further Blake got active in competitive swimming as well and successfully entered a ten-mile race on the Delaware River.

In 1921, Blake first attempted to ride waves and used an older board he found in Santa Monica. On his own account, he failed completely and did not try again until three years later. Blake traveled to Hawaii to get to know the sport better and made friends who were all skilled surfers. For the next 30 years, Tom Blake divided his life between Hawaii and the Mainland.

Blake and his friend Sam Reid became the first to surf Malibu Point in 1927. One year later, he managed to not only organize but also win the first Pacific Coast Surfriding Championship. He started to design his own board and entered the Hawaiian Surfboard Paddling Championships with a lightweight board. In 1932 Tom Blake and two friends managed to paddle 26 miles from the mainland to Catalina Island. He set an extraordinary milestone entering the waves at Kalehuawehe near Waikiki in 1936. Blake managed to make a run at approximately 4,500 feet, the longest recorded surf ride in history.

Blake’s surfboard designs also became more and more famous throughout the years. He constructed a hollow board with transverse bracing in 1929 and received a patent for his design. It is believed that this development opened the sport to numerous people who “..weren’t able to muscle the heavy plank boards down the beach and into the water.” Eventually, the boards were replaced by laminated boards with an interior layer of balsa, then by foam-and-fiberglass designs. Another important development in the designs of surfboards was the fin. Starting from 1935, Blake began experimenting with fins on the previously flat-bottomed boards. He later commented on his first surf with the fin: “

In paddling out, the board had an entirely different feeling with the skeg on it, it wasn’t entirely a likable feeling… But I got a pretty good wave and right away found the remarkable control you had over the board with the skeg on it. It didn’t spin out, it steered easy, because the tail held steady when you put the pressure on the front. You could turn it any way you wanted it. I knew right from that moment it was a success. I consider it as my good solid contribution to the sport.“

Blake’s inventions and innovations were not limited to surfboards. He was particularly interested in improving lifesaving equipment, and he adapted his hollow surfboard designs into paddleboards for rescue use. He built the first aluminum “torpedo” rescue buoy, basing it on the steel buoy created by California lifeguard Harry Walters in 1919. His contributions to the field of water rescue were recognized by the National Surf Life Saving Association, which presented Blake with an achievement award noting, “the thousands of lives saved because of his inventive contributions in the interest of fellow human beings.” Blake also contributed substantially to the field of underwater photography. In 1929, he purchased a Graflex camera from Duke Kahanamoku, then built a waterproof housing that allowed him to take photographs underwater or while surfing. Although it is often stated that Blake “built the first underwater camera,” in fact, there had been sporadic attempts to do so since as early as 1856. Nonetheless, Blake’s innovations were significant, and a photo spread of his work that was published in 1935 in National Geographic magazine helped call attention to the potential his device offered.

Blake maintained a nomadic existence for nearly all the remainder of his long life. With the exception of the wartime era, he traveled back and forth from the mainland to Hawaii every year until the mid 1950s. While in Hawaii, he usually lived in a beach shack or aboard a boat; on the mainland he often lived out of his car. He typically supported himself by working as a lifeguard, an occupation he pursued into his early sixties. In the history of surfing, Blake is considered one of the most important persons and in many ways. His athletic achievements were as legendary as his innovations in surfboard design. Tom Blake popularized the sport and in 2001, surf journalist Drew Kampion wrote, “Blake altered everything. He almost single-handedly transformed surfing from a primitive Polynesian curiosity into a 20th-century lifestyle.” Tom Blake died on May 5, 1994, at age 92.