You are here: Home › mathematics › Frank P. Ramsey and the Ramsey Theory 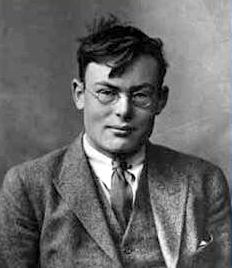 On February 22, 1903, precocious British philosopher, mathematician and economist Frank Plumpton Ramsey was born. Although he died already at age 26, he had made significant contributions to logic, philosophy of mathematics, philosophy of language and decision theory. He remains noted for his Ramsey Theory, a mathematical study of combinatorial objects in which a certain degree of order must occur as the scale of the object becomes large.

“The first problem I propose to tackle is this: how much of its income should a nation save? To answer this a simple rule is obtained valid under conditions of surprising generality; the rule, which will be further elucidated later, runs as follows.
The rate of saving multiplied by the marginal utility of money should always be equal to the amount by which the total net rate of enjoyment of utility falls short of the maximum possible rate of enjoyment.”
– Frank P. Ramsey, “A Mathematical Theory of Saving”, The Economic Journal, Vol. 38, No. 152 (Dec., 1928)

Frank P. Ramsey was born as the eldest of four siblings in Cambridge where his father Arthur Stanley Ramsey, also a mathematician, was President of Magdalene College. His brother Michael Ramsey later should become Archbishop of Canterbury. Ramsey entered Winchester College in 1915 and later returned to Cambridge to study mathematics at Trinity College. At Trinity College, Ramsey became a student to John Maynard Keynes.[3] He became a senior scholar in 1921 and graduated as a Wrangler in the Mathematical Tripos of 1923. Then, Ramsey went to Vienna for a short while, returning to Cambridge where he was elected a fellow of King’s College Cambridge in 1924, which was rather unusual, because in fact Ramsey was only the second person ever to be elected to a fellowship at King’s College, not having previously studied at King’s.[1]

The Foundations of Mathematics

In 1926 he was appointed as a university lecturer in mathematics and he later became a Director of Studies in Mathematics at King’s College. It was a short career, for sadly Ramsey died at the beginning of 1930. Suffering from chronic liver problems, Ramsey developed jaundice after an abdominal operation and died on 19 January 1930 at Guy’s Hospital in London at the age of 26. However, in the short time during which he lectured at Cambridge he had already established himself as an outstanding lecturer. He published his first major work The Foundations of Mathematics in 1925, in which he accepted the claim by Russell [4] and Whitehead made in the Principia Mathematica that mathematics is a part of logic.

Already at the age of 19, Ramsey was able to make the first draft of the translation of the German text of Ludwig Wittgenstein’s Tractatus Logico Philosophicus,[5] Wittgenstein’s seminal work that aimed to identify the relationship between language and reality and to define the limits of science. Ramsey was very impressed by Wittgenstein’s work and after graduating in 1923 he made a journey to Austria to visit Wittgenstein. For two weeks Ramsey discussed the difficulties he was facing in understanding the Tractatus. Wittgenstein made some corrections to the English translation in Ramsey’s copy and some annotations and changes to the German text that subsequently appeared in the second edition in 1933.

In his second paper on mathematics On a problem of formal logic, which was published in the Proceedings of the London Mathematical Society in 1930, he examined methods for determining the consistency of a logical formula and included some theorems on combinatorics which have led to the study of a whole new area of mathematics called Ramsey theory. The combinatorics was introduced by Ramsey to solve a special case of the decision problem for the first-order predicate calculus. Ramsey theory studies the conditions under which order must appear. Problems in Ramsey theory typically ask a question of the form: “how many elements of some structure must there be to guarantee that a particular property will hold?”

Ramsey made a systematic attempt to base the mathematical theory of probability on the notion of partial belief. This work on probability, and also important work on economics, came about mainly because Ramsey was a close friend of John Meynard Keynes.[3] Being a friend of Keynes did not stop Ramsey attacking Keynes’ work, however, and in Truth and probability (1926) he argues against Keynes’ ideas of an a priori inductive logic. Ramsey’s arguments convinced Keynes who then abandoned his own ideas.

The Mathematical Theory of Saving

In economics, Ramsey wrote two papers A contribution to the theory of taxation and A mathematical theory of saving. These would lead to important new areas in the subject. In A mathematical theory of saving, published in The Economic Journal in late 1928, Ramsey aimed to determine the optimal amount an economy should invest (save) rather than consume so as to maximize future utility, or in Ramsey’s words “how much of its income should a nation save?” Keynes described the article as “one of the most remarkable contributions to mathematical economics ever made. The Ramsey model is today acknowledged as the starting point for optimal accumulation theory although its importance was not recognized until many years after its first publication.

Only the Good Die Young

Ramsey suffered an attack of jaundice and was taken to Guy’s Hospital in London for an operation. He died following the operation, on January 19, 1930, at age 26.