You are here: Home › chemistry › John Mercer and the Cotton Mercerisation 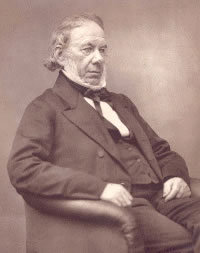 On February 21, 1791, English dye and fabric chemist John Mercer was born. He invented the mercerisation process for treating cotton which is still in use today and was a pioneer in color photography.

John Mercer grew up in Lancashire, England. He entered the textile industry as a bobbin-winder when he was still a boy. His father died in 1802, and the family were left very poor. John moved about round various relatives as circumstances varied. His mother later married a Thomas Mercer and had a further child. The art of dyeing came to Mercer’s interest approximately at the age of 16. He set up a dye laboratory at his home and experimented with mixing colors and soon began a partnership with an investor. They opened a small dyeing shop, which was considered quite successful. [1,2]

After several years of experience as a simple weaver, Mercer returned to the profession of a dyer and increased his enthusiasm in chemistry. Mercer managed to produce a new orange dye, which was found good for calico-printing. In the late 1810s, Mercer was employed by the Fort brothers, a textile printing company. Mercer was employed as a color chemist and after making progress with further colors including indigo, yellow, and orange, the chemist was made the company’s partner in 1825. [1] When the company was dissolved in 1848, he became relatively wealthy. Mercer developed new methods for fixing Prussian Blue on calico and wool, developed new mordants for dyeing, improved the extraction of carminic acid from cochineal, and improved the oiling process in Turkey Red dyeing. He saved lives with his research into early antimicrobials, preventing the spread of cholera in textile villages in Lancashire.[5]

Despite the profitable partnership with the Fort brothers, Mercer had no more chance to develop new chemicals for textile processing in his laboratory. He dissolved the partnership in 1848 and devoted all of his time and resources to pursue his own research. It is believed that Mercer had wondered about the effect upon cotton fabric of sodas, acids, and chlorides. He came to realize that the material became thicker and shorter when treated with these chemicals. These early experiments turned out to be Mercer’s most important. The process made the cotton stronger and more easily dyed. John Mercer called this process mercerization.

Treatment with sodium hydroxide destroys the spiral form of the cellulose with formation of alkali cellulose, which is changed to cellulose hydrate on washing out the alkali. Caustic soda concentrations of 20–26% are used. Effective mercerization requires the use of wetting agents. The improved lustre of mercerized cotton is due to the production of nearly circular cotton fibres under tension. Another characteristic feature is the untwisting (deconvolution) of the cotton hair.

Mercer’s method was patented in 1850. It became clear that mercerization could be easily applied to many other materials. In 1851 it was patented in Great Britain and the USA. But it was not until much later in 1890, when Horace Arthur Lowe realized that it could be used to create shine. To this day, mercerization is an important part of the cotton finishing process. John Mercer was made a Fellow of the Royal Society in 1850 and he was acknowledged the ‘father of textile chemistry’. [1,2] To this day, Mercer remains the only textile chemist who has ever been elected as a Fellow of the Royal Society.[5]

Mercer was also interested in photography and especially photochemistry. He managed to develop processes for photographic printing on fabric.[2] However, he could not make any financial profit from this. He was a juror at the Great Exhibition in 1851 and 1862 and was a justice of the peace for Lancashire.[4] He was still called on for scientific investigation, particularly in the field of water supply, and it was whilst collecting samples for this that he slipped and fell into a reservoir. His forward‐looking views on technical education, that workers in the industry should be fully instructed in the nature of the various substances used in their arts, later came to fruition in the establishment of the textile departments in Manchester, Leeds and Glasgow.[5] John Mercer died at his home in Great Harwood, Lancashire, on November 30, 1866, at age 75.