You are here: Home › archeology › The Sky Disc of Nebra 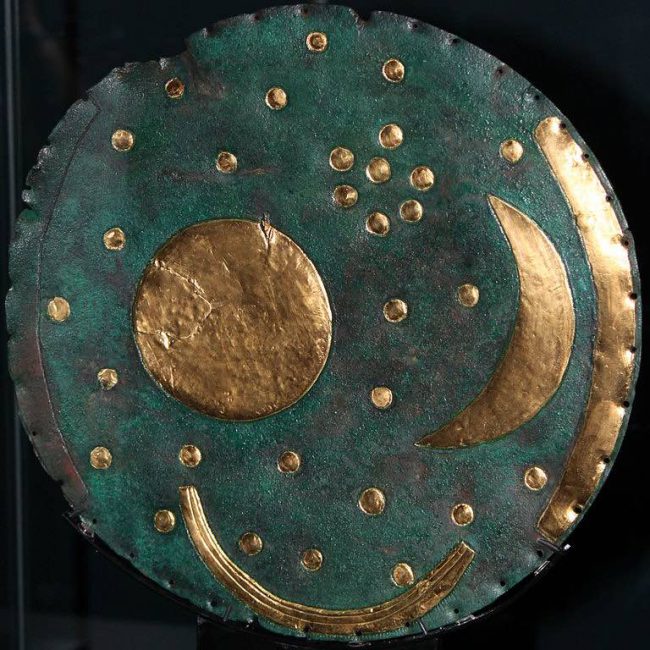 On February 23, 2002, the state archaeologist Harald Meller succeeded to acquire the now famous Nebra Sky Disc in a police-led sting operation in Basel, Switzerland. The Nebra Sky Disc is a Bronze age artifact shaped like a disk with a blue-green patina and inlaid with gold symbols, representing a map of the sky.

The disk weighs about 2,3 kg and consists of bronze as well as an alloy made of copper and tin. Originally, the disc was dark brown or even black but after the long years of sitting in the dirt, it became green. It was surprisingly found, that the disk was altered several times through the years. The smaller discs made of gold originally counted 32 pieces but due to the later adding of two ‘horizons’, two pieces were covered. By the time it was buried, one of the horizons was taken off and three holes were punched into the disk.

The disk was discovered by two Germans with the help of a metal detector, first thinking of it as the center piece of a shield. In Cologne, the disk was sold for about 15.000 Euro and until 2001 it was owned by several people across Germany illegally. Until this day, the actual value of the sky disk is unknown, but the insurance value in 2006 was 100 Million Euros. Due to the fact that the sky disk was excavated by amateurs, it was partially damaged. Also, the discoverers tried to clean the disk with soap and a steel sponge, wherefore the gold applications were damaged significantly. In Halle, Germany, it was then restored and the removed gold plates were reattached.

Decipherment of the Disc

Scientific research on the sky disk started as soon as possible and the responsible scientists were the archeologist Harald Meller, the astronomer Wolfhard Schlosser, the archeo-chemist Ernst Pernicka, the Saxony-Anhalt State Criminal Investigation Department, as well as experts from the University of Wales. It was found without a doubt that the Sky Disk of Nebra and the other findings the two men made, consisting of several swords, chisel, axeheads, and bracelets belonged together. Their estimated age was about 3600 years, which was found out through intense x-rays. It was then also figured out that the disk was produced in three different stages. A particle accelerator in Berlin researched on the different gold applications and it became quite clear that the gold particles came from the Carnon River in Cornwall.

It was furthermore assumed that during the first production phase of the sky disk, the open star cluster Plejades were added, represented by the smaller gold disks. The bigger yellow disks could either be interpreted as the Sun or a full Moon. The third major object was thought of as the Moon as well. It was assumed that the disk may have helped farmers calculating the dates for harvesting and seeding. Others saw a probable use of the disk in harmonizing the Lunar calendar with the Solar year. Later on, the signs for a religious use of the disk became more frequent and it was furthermore assumed that it was part of a complex religious system in Europe.

In the following years after its discovery, the Sky Disk of Nebra was exhibited numerous times across in Europe.