You are here: Home › architecture › The Organic Architecture of Frank Lloyd Wright 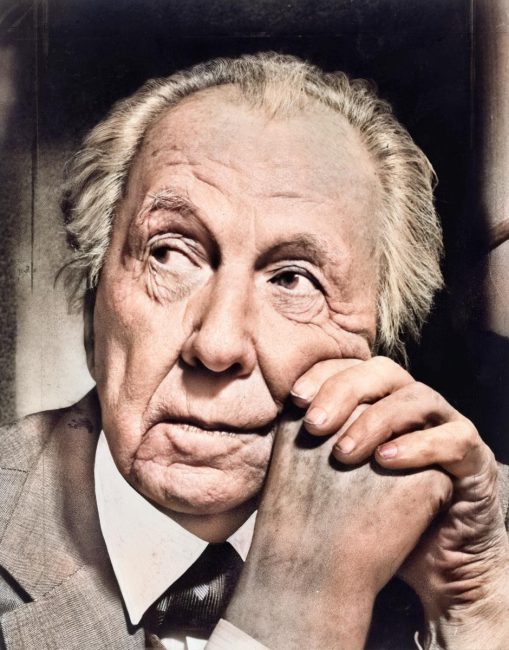 On June 8, 1867, American architect, interior designer, writer, and educator Frank Lloyd Wright was born. Wright designed more than 1,000 structures, 532 of which were completed. Wright believed in designing structures that were in harmony with humanity and its environment, a philosophy he called organic architecture.

“No house should ever be on a hill or on anything. It should be of the hill. Belonging to it. Hill and house should live together each the happier for the other.”
– Frank Lloyd Wright: An Autobiography (1932) page 168

Frank Lloyd Wright was born in the farming town of Richland Center, Wisconsin, United States.  His father, William Cary Wright, was an orator, music teacher, occasional lawyer, and itinerant minister. It is said that his mother, Anna Lloyd-Jones, confronted Frank at an early age with images of architectural marvels in order to train him to become an architect from an early age. Frank studied at the University of Wisconsin from 1885, but left it without a degree in 1887 – he received an honorary doctorate from the University in 1955. He subsequently joined Joseph Lyman Silsbee’s architectural practice in Chicago, but left the firm that same year to work in the offices of Dankmar Adler and Louis Sullivan.[1] There he mainly occupied himself with residential buildings and quickly began to plan them independently. In 1893 he founded his own company in his new place of residence Oak Park, a suburb of Chicago. By 1901 he had worked on about 50 projects. Until about 1910 he mainly created so-called Prairie Houses. Among his employees were Walter Burley Griffin and his later wife Marion Mahony Griffin. In 1909 he left his wife and children and travelled to Europe for 2 years. There, too, he became an important impulse tutor of architecture. His works of the ten years influenced Walter Gropius and the Dutch movement De Stijl, among others.[7] 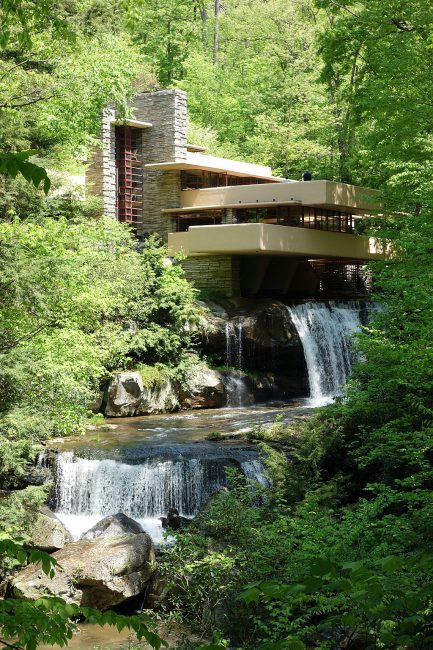 “Every great architect is — necessarily — a great poet. He must be a great original interpreter of his time, his day, his age.”
– Frank Lloyd Wright, The Future of Architecture (1953)

Close contact with the landscape of his native Wisconsin was central to his later work: the seamless integration of the building into the landscape is one of the motifs of his immense creativity. This design philosophy is probably best expressed in Wright’s most famous work, Villa Fallingwater, built for Edgar J. Kaufmann on a small waterfall. Other well-known designs include the Solomon R. Guggenheim Museum in New York, realized in conjunction with Hilla von Rebay, and the administrative building for the Johnson Wax Company. After centuries of America’s cultural dependence on the old continent, Wright’s aim was to establish an independent architecture for the new continent. His so-called Prairie Houses were intended to express the American spirit of democracy, pioneering spirit and cohesion. He integrated them perfectly into their surroundings and provided them with their typical horizontal window bands and roof slabs. In this way he ensured optimal living comfort for the difficult desert climate. He built 49 buildings in eight years. The most important element was the fireplace as a meeting place for the community around which the building developed. The whole is harmoniously embedded in the surrounding landscape. The concept is linked to the Arts and Crafts Movement, which favoured craftsmanship over industrial production and emphasised simplicity and functionality. In doing so, it opposed the predominant neoclassical architecture of the time.

“Architecture is life, or at least it is life itself taking form and therefore it is the truest record of life as it was lived in the world yesterday, as it is lived today or ever will be lived.”
– Frank Lloyd Wright, as quoted in An Organic Architecture (1970)

Under the name Taliesin, Wright founded several “studios” in the middle of the American prairie, which were to serve as development platforms for the new, independent American architecture. Wright’s office was an attraction for young architects from all over the world who worked with him at times and later developed his style in their home countries.  In his book When democracy builds  published in 1945, Frank Lloyd Wright creates a kind of utopian master plan for the civilization of the 20th century. “Usonia” is what Wright calls his visionary America. It consists of a new urban form conceived by him: Broadacre City. Only here do people enjoy “true individuality” (and not “robust individuality” = egoism) in a true holistic democracy. Characteristic of this vision are the values of the Declaration of Independence. Since all potential leaders (politicians, philosophers, artists, …) would have failed, Usonia is led by an architect. The government only takes on administrative tasks.

Unlike all other great American architects of his time, Frank Lloyd Wright has received few official honours or awards in the form of architecture prizes or honorary doctorates. On April 4, 1959, Wright was hospitalized for abdominal pains and was operated on April 6. He seemed to be recovering, but he died quietly on April 9, 1959, at age 92.